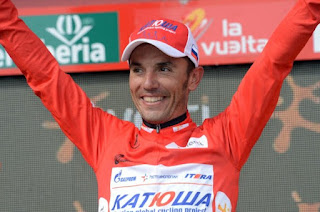 Today was the first of three really tough days in la Vuelta and while it looked like Contador had things under control with about 2 k to go, Joaquim or Joaquin Rodriquez (they spell his name both ways, I don't know which one is right) pulled himself back up to Alberto in the closing meters and easily outsprinted him gaining a few more seconds.  Contador is not use to this and is clearly getting a bit frustrated.  I don't think anyone really expected this but if Rodriquez gets through these next couple of days he may have el Pistolero's number.  Valverde came through 3rd a few seconds behind Contador and Chris Froome lost roughly a half minute as I'm sure he is feeling all the racing from the Tour in his legs.  There were only three weeks between the end of the Tour de France and the start of La Vuelta not to mention Froome also did the Olympics.  He's got to be fried.  Tomorrow is a new day.  Hasta luego.
Posted by MEECH at 9:03 AM