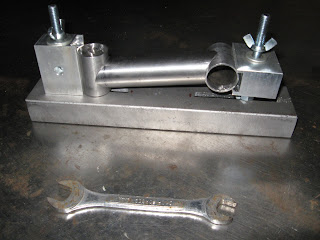 This is my new stem jig that my good friend Bob Davis turned out for me the other day at his shop.  Its super-simple and does everything I ask it to. I just realized in this photo its not even tightened down yet and it still works.  What more could you ask for? Look at all that steel in this photo.  Ok, maybe a little aluminum to shave a few grams off the Jigastem but what did you expect, it is high performance jig.  I can't wait for my big box of carbon fiber and resin to get here.  Don't expect to see any clean photos like this one.  Stay tuned.  Chao.
Posted by MEECH at 4:27 PM No comments:

Awesome dude on road bike gets away from the police!!

Not sure if this is real or not but I love it. I'm guessing he was running 40cm bars and cranks with a super-low Q-factor to get outta this one.
Posted by MEECH at 4:15 AM 1 comment: 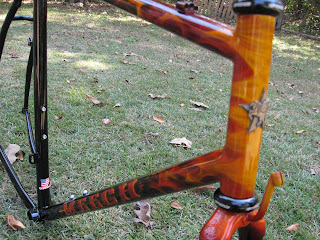 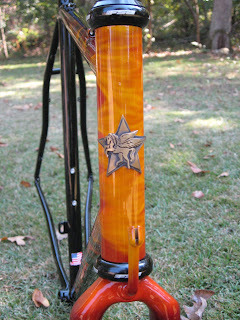 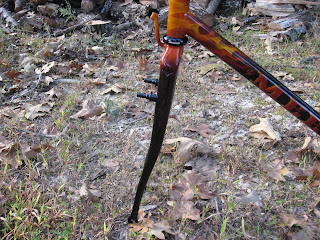 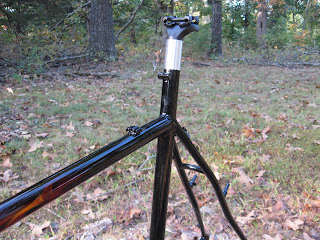 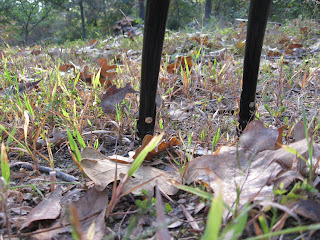 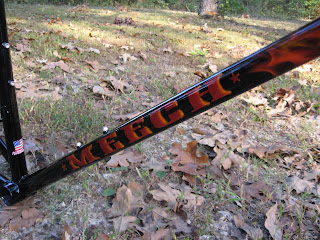 Threw a couple extra curves into this one for the Texas Show.  Check out that roller coaster fork with the silver buttons brazed into the back of the fork legs.  I let a local air brush artist have his way with this one and he set it on fire.  Thanks Mike!  This one has an integrated seatpost and the front brake cable hanger is brazed into the fork.  Oh yeah, I couldn't leave out the finger smudges on the seat tube.  I am "theeee" worst photographer of all time.
Posted by MEECH at 5:04 PM 2 comments: 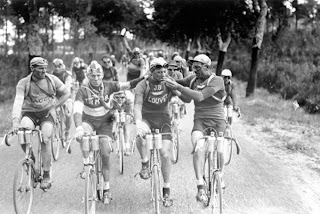 I am so sick of all the doping allegations in professional cycling.  Its become a soap opera, an unending, boring and pathetic one at that.  How much can the average cycling enthusiast take?  Unfortunately its not just the pros either, even weekend warriors are boosting their poop just so they can look good and get a piece of a $500 prize pool, mind you its at the expense of the riders racing clean.  At least these ol' boys here are open and honest about it, heck, they're sharing the goods with their competitors and having a good time as well.  Go figure. Riding together, holding each other up while they pass the good stuff around, wearing those trippy goggles like they are fixing to fly an airplane or weld something. Nobody is attacking one another, and they'll probably all stop at the next cafe and have a cappuccino together here in a bit, not even worried about who wins the stage. Look at those 2 flasks mounted to the handlebars, probably one filled with Wild Turkey and the other with Coke. On the far left you have what appears to be Fabian Cancellara's grandpa saying, "Come on man, stop bogart'en that thing and pass it.", but check out the guy back in the middle of the peloton craving attention, "Whoo hooo, look at me man, I'm number one!" Or maybe he is trying to tell the team car that he is out of
Wild Turkey and needs a fresh bidon.  Man, what a good time.  Wish I was there.
Posted by MEECH at 6:44 AM No comments:

The Pain Party Has Started 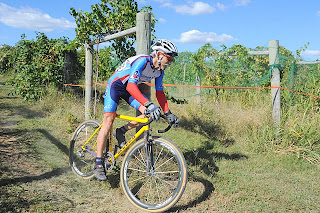 Cross season has officially begun and here is a quick photo of factory racer Larry Yancey at his first event.  Actually its his second but the first race in Herman, Missouri got rained out, yeah rained out.  How bad does it have to be in order to rain a cross race out?  Well, apparently cars were floating away during the storm.  Anyway, this course in Carbondale, Illinois looks a little more accommodating, dry dirt covered in grape vines.  No excuses for bonking here and I guess that explains why the prize purse was paid out in bottles of wine. Larry took first place in the Masters class while his racing buddy Nate took third in the Pro 1-2.  Congrats to the Jonesboro boys for a solid race day, and for all you cross racing whinos out there you may want to mark your calendar for this one next year.  Cheers.
Posted by MEECH at 6:33 AM No comments: 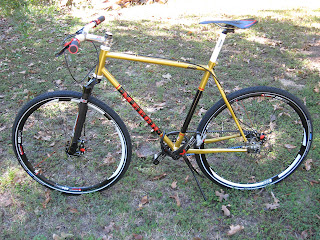 I finally got this frame built up this week.  I have had this frame laying around for a while and have been gradually putting it together and it feels good to see the finished product and test ride the belt-drive system.  It rides super-smooth and the belt-drive seems very strong with no noticeable weaknesses.  The finished product tips the scales at 20.9 lbs. but who cares, just ride it and enjoy it.  Its stacked with components from White Brothers, FSA, American Classic, and of course Carbon Drive Systems.  Its roughly a size medium but I can fit my lanky arse on it and be pretty comfortable, enough to get the vibe anyway.  That carbon shell saddle by FSA is more comfortable than I thought it would be.  I don't know about doing any double-centuries on it but I think I could get use to it.I'm taking this thing to the Texas Bike show on October 16 & 17 so feel free to come by and check it out.  Chao amigos. 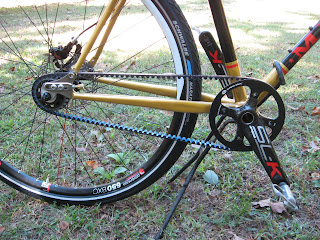 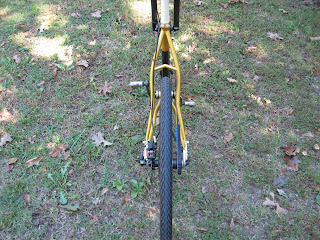 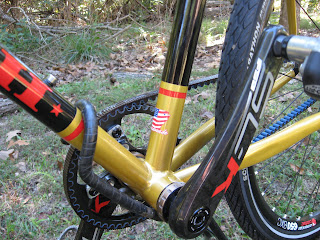 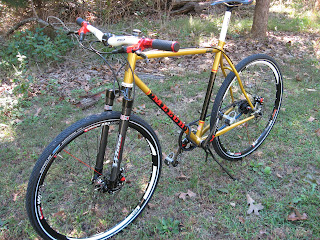