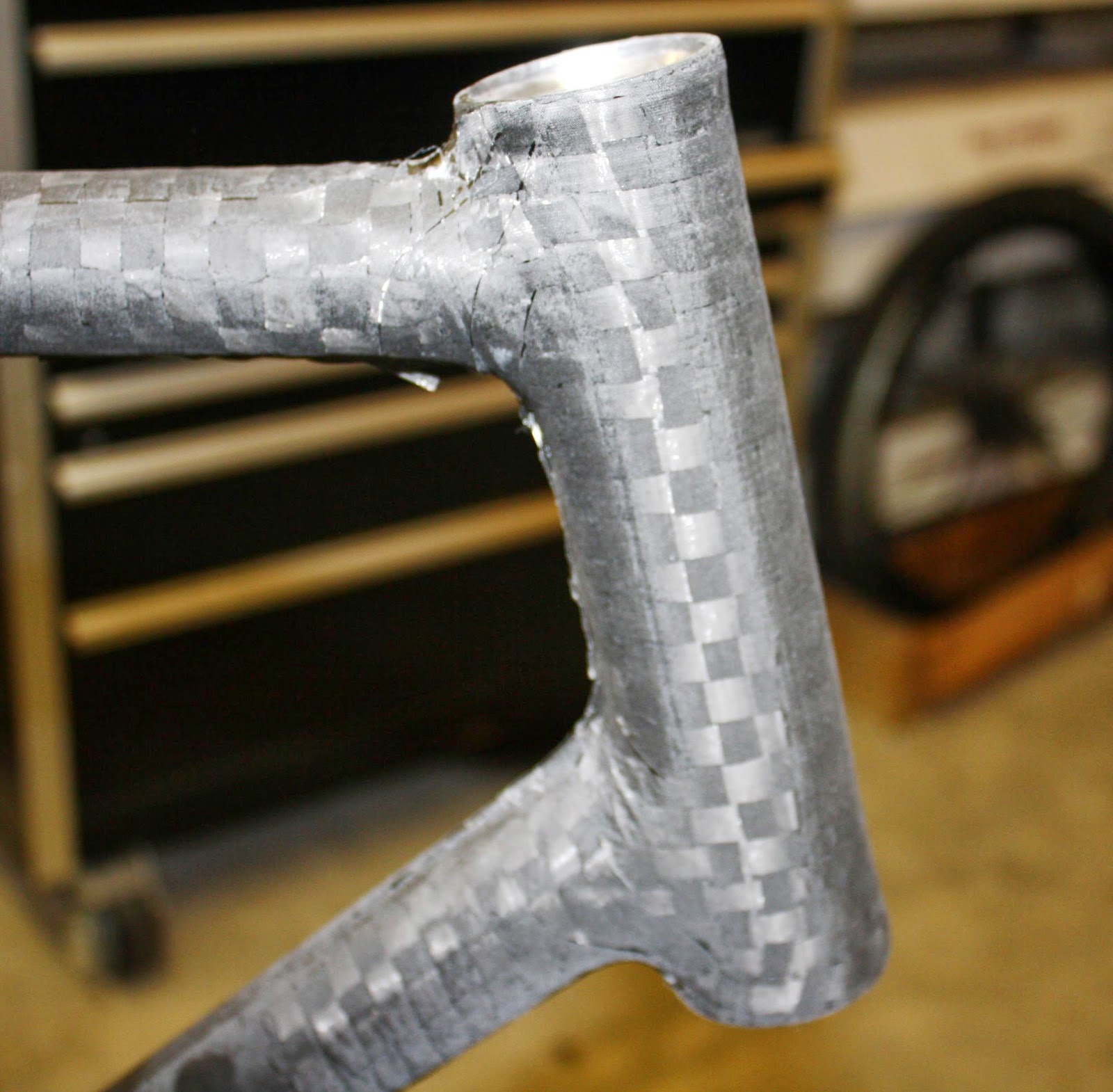 Whats up?  I know, I've been a absentee blogger.  It couldn't be helped, or at least it felt like it couldn't.  Yesterday was the first opportunity I've had to get something done on my carbon frame.  I'm beginning to wonder how long its actually gonna take.  It'll have to be soon because I've got some orders that I need to get started on.  Actually I've already started on them and I'm trying to get this done on the side.  My goal is to be test riding this thing in the spring time.  There have been some extremely cold days here in northern Arkansas.  I'm handling them about as good as can be expected (not good at all).  I move slower, get less done, not to mention that during the winter I feel old.  My face seems more tense, my body aches more, and my legs don't want to spin on the bike, and thats if I manage to make myself get on it at all.  How do you folks from the North do it?  I'm in admiration.  I really wouldn't mind moving to Florida, although I don't think the salty air is good for steel frames.  Thats ok, we're talking carbon right now.  I laid a cosmetic layer down on the head tube and it turned out pretty good.  This 12K weave is a bit difficult to make look good but overall this wasn't too bad.  Here are a couple of shots taken right out of the bag and a couple more after it was sanded. 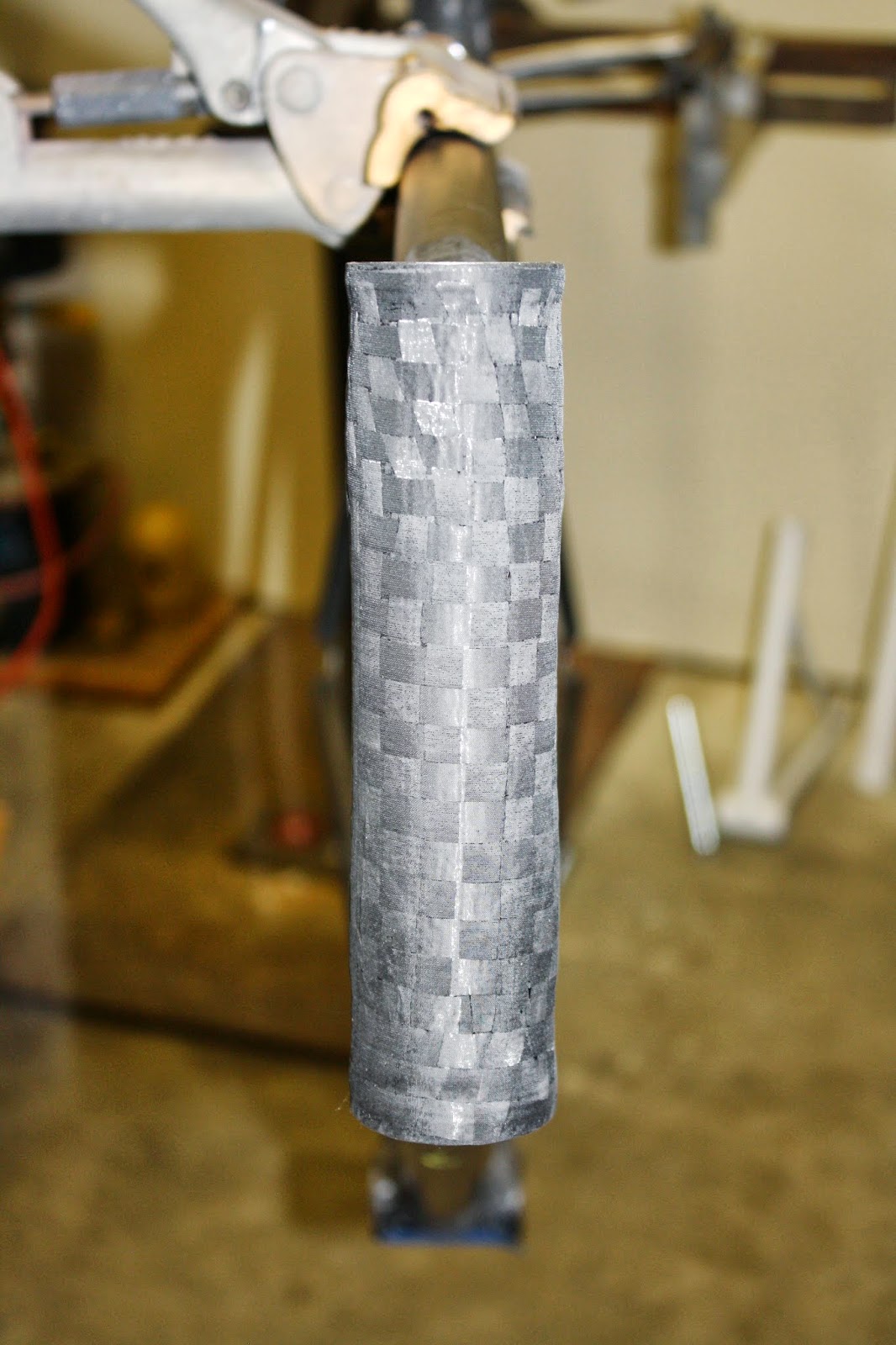 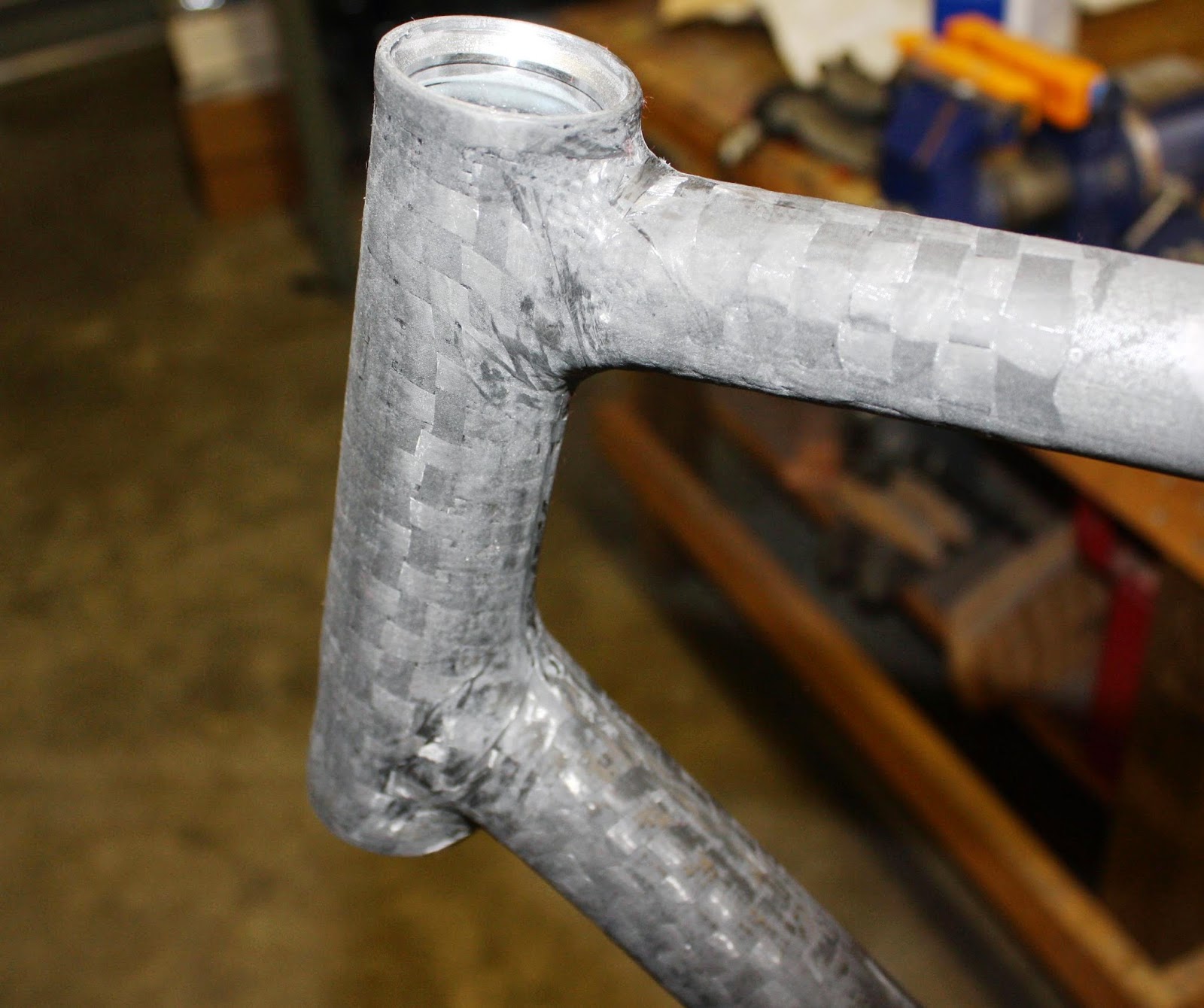 It turned out a little better than anticipated although it did have a couple of small wrinkles that needed to be smoothed out. 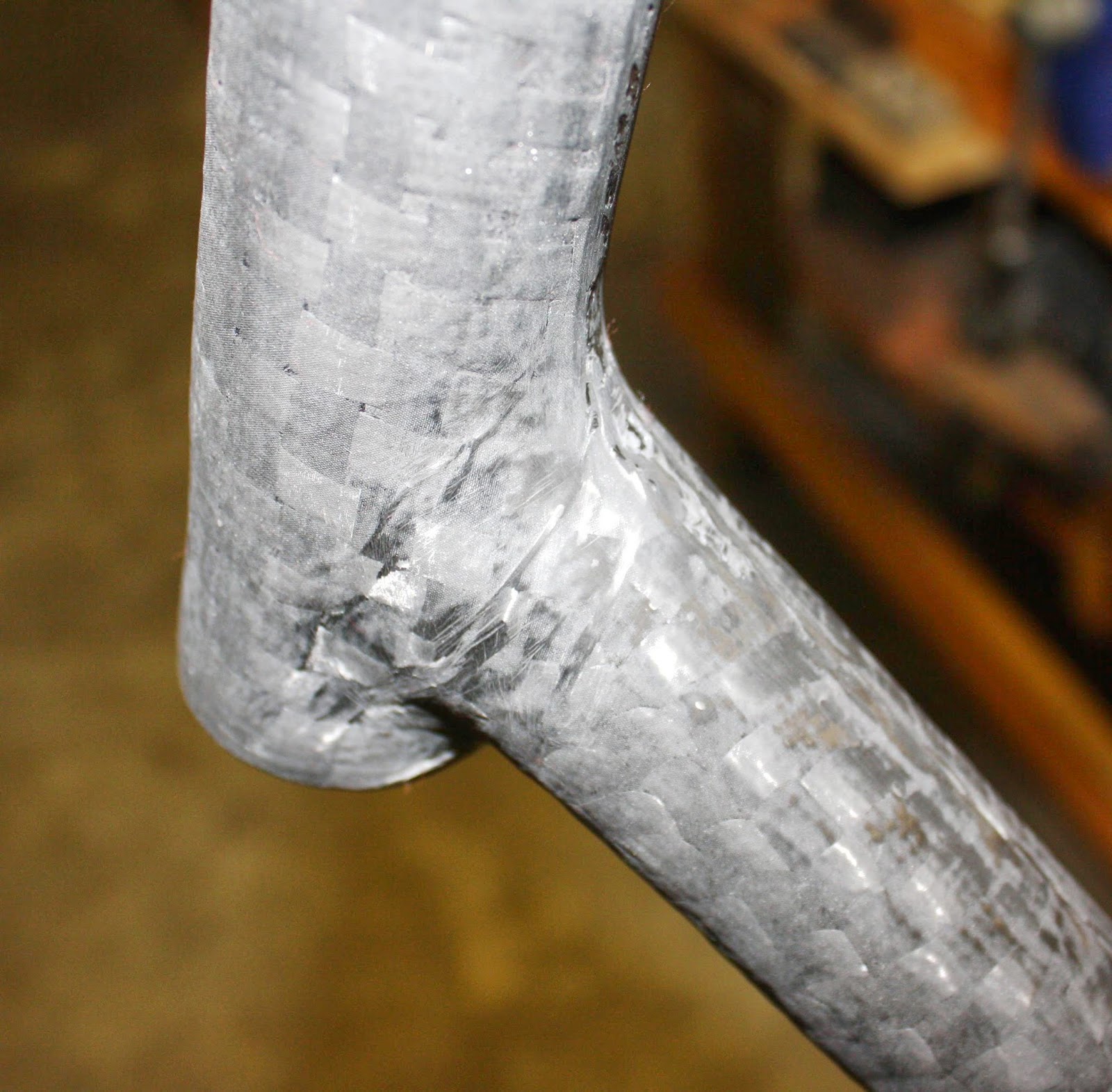 Here is the seam up close. Instead of trying to cut release film to fit around each tube I just took one big piece and folded it over the complete area just like I do the breather cloth and bagged it and waited to see how it came out.  I'm curious to see how some clear coat will make this appear.  It won't hide anything I'm sure, and if its anything like paint it will only make it stand out more.  I'm honestly not too worried with that at this time.  This frame is all about developing a technique and becoming comfortable with it.  The aesthetics will have to come from practice. 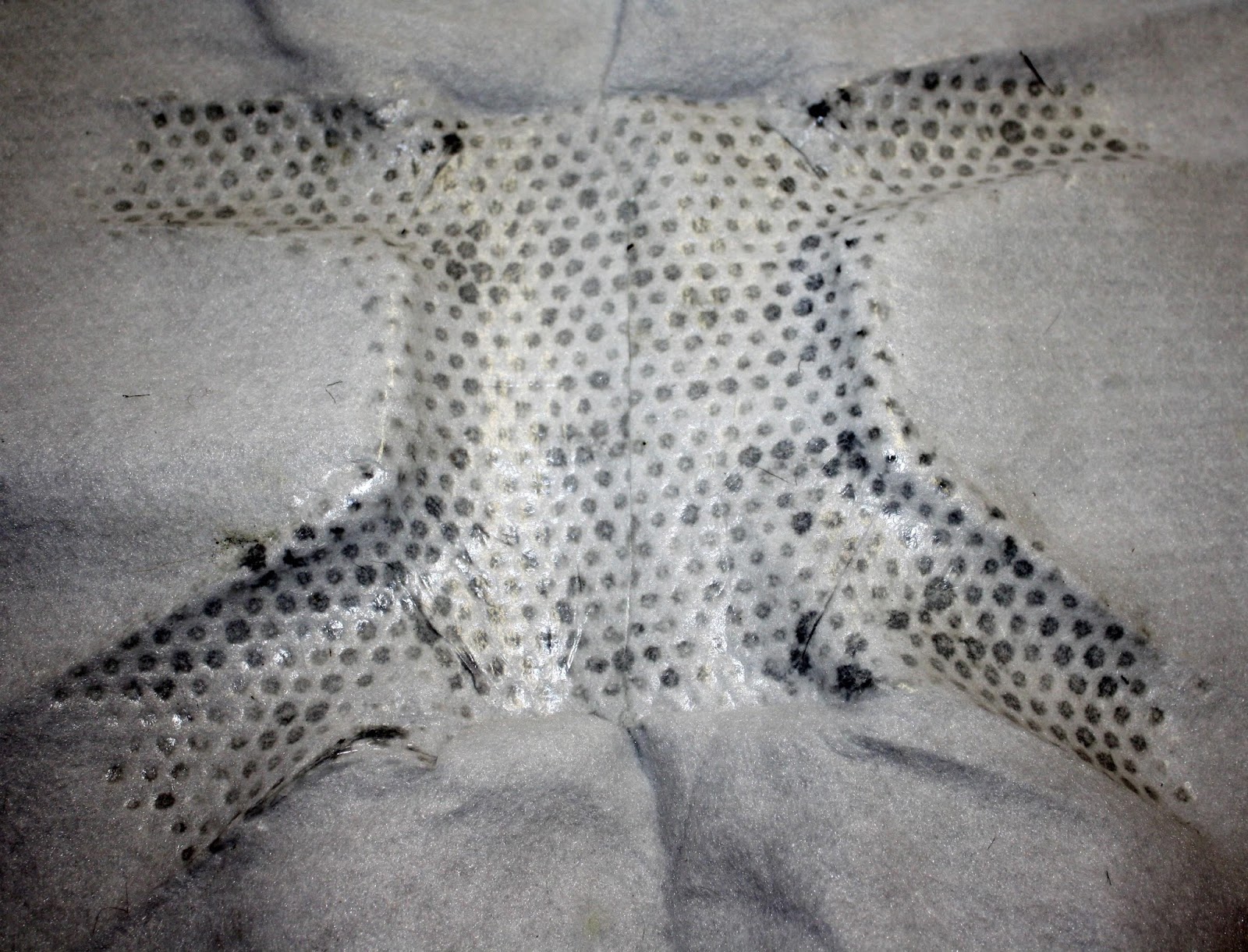 This is vacuum-bag art.  Don't kid yourself, this is valuable stuff.  If you would like to own a piece of art like this you can search Ebay and hope that you're the winning bidder, or should you choose to buy a MEECH Custom Carbon frameset I will just give it to you.  I spent a couple of hours last night staring into this thing trying to find something interesting like a constellation or Jesus riding a bicycle however I gave up after the thought came to me that it only looks like a wet diaper, but it is still for sell.  Thanks for stopping by and I'll get back as quick as possible.  Enjoy the weekend!  Road race season has officially begun.

Cody "The Kid" Kaiser defies gravity and hops up the Belgian stairs at t...

Wrong! Do it Again. 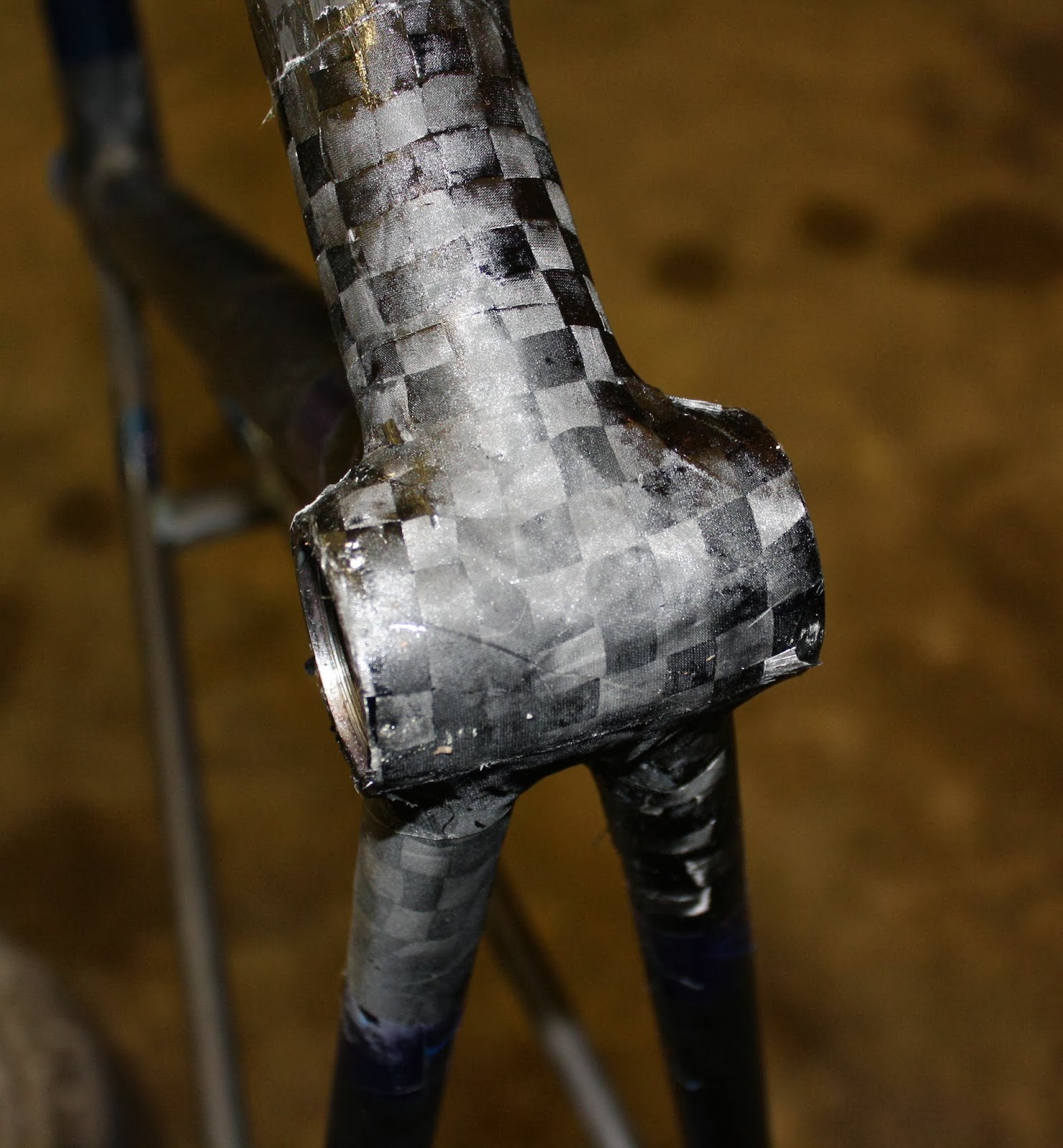 Couple quick shots of the latest mess I've made.  Its not really that bad but its a little bit difficult to get the vacuum bag to pull tight perfectly around the bottom bracket shell area.  With roughly 5 tubes going in 5 different directions, several complex curvysome radial-diametrylloids,  and throw in a couple of invisible squellallellagrams, its kinda hard to get the peel ply and breather cloth to lay down flat, so you can't really tell which direction the bag is gonna pull.  It wasn't all bad though, it actually pulled things together it all the right places except for one.  Follow me. 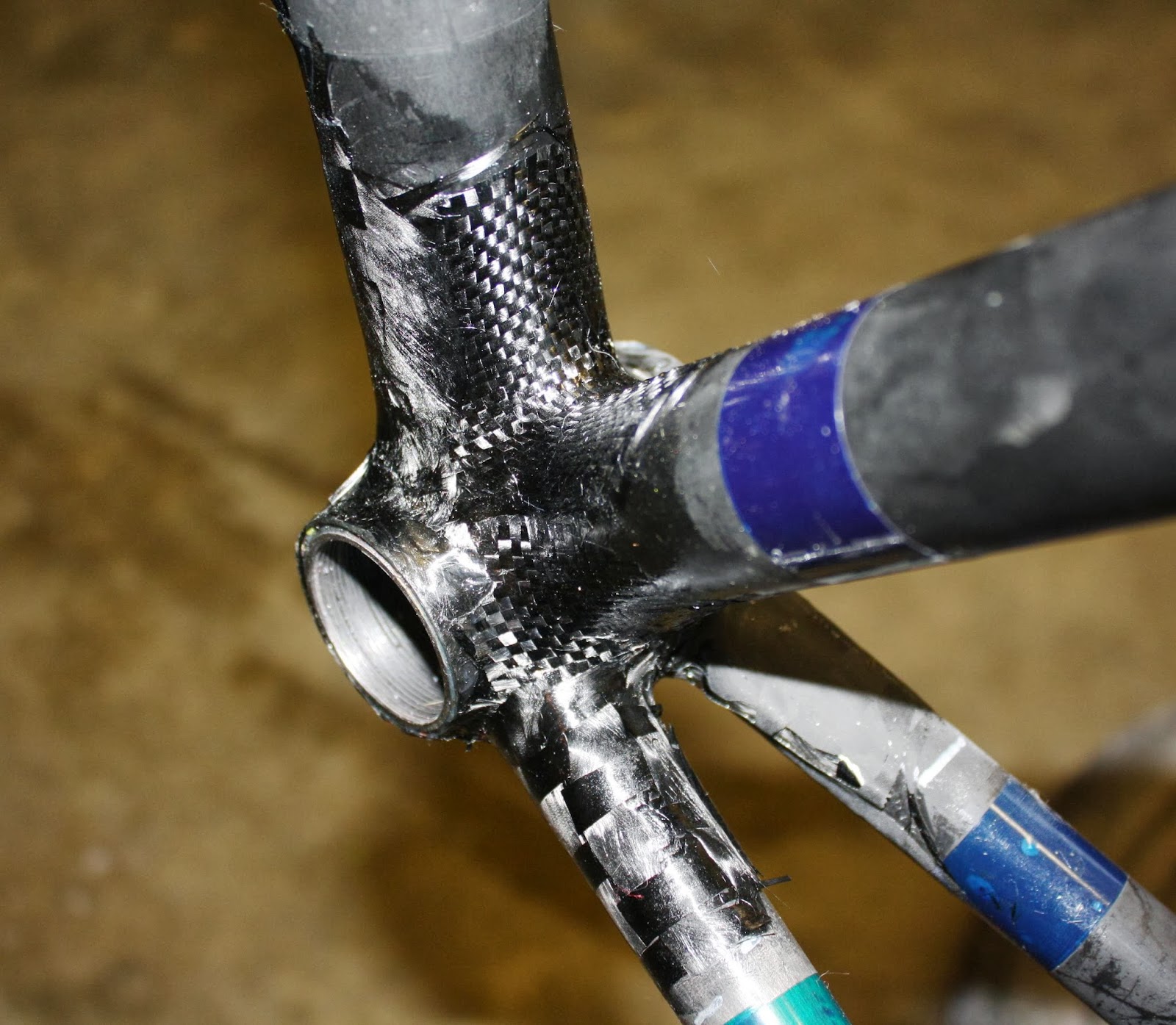 "Hey D, whats with all the different carbon patterns going on?"  Oh, well you see, thats part of MELP.  "What's MELP?"  Its the MEECH Experimental Laminate Process.  No seriously though, the stardard carbon weave pattern on top conforms really well to the complex shapes shown here and it lays down much better than the uni-directional carbon I have, which is really thick by the way.  The carbon cloth that has the big squares is some 12K weave that I bought because I like the way it looks and I'm wanting to use it as a cosmetic layer, think back to the Scott CR1.  Are you beginning to think that I'm stuck back in 2003?  If only.  Just kidding, I love my life now and wouldn't trade it for anything, except for maybe a time machine and a genie in a bottle.  "If you have a time machine what would you need with a genie?  Umm, ever see the show "I Dream of Jeannie?" You're not gonna make me explain this one are you? So anyway, at this point I was a bit frazzled with the way this layup had gone and since everything had gone awry I just threw a patch of this 12k weave on to see how it would turn out.  Let me tell you, this has got to be the most difficult carbon fabric to work with known to man.  It just wants to fall apart while your cutting it.  Forget trying to cut an experimental piece and see how it'll lay down.  The only way to work with it at all is to apply the resin while its still all together and then cut it, this way the resin kind of holds it together.  It has to get better from here.  Oddly enough though, the junctures around all the tubes and the bottom bracket are nice and snug, really solid.  All it needs is sanding and a cosmetic layer and it'll be good to go. 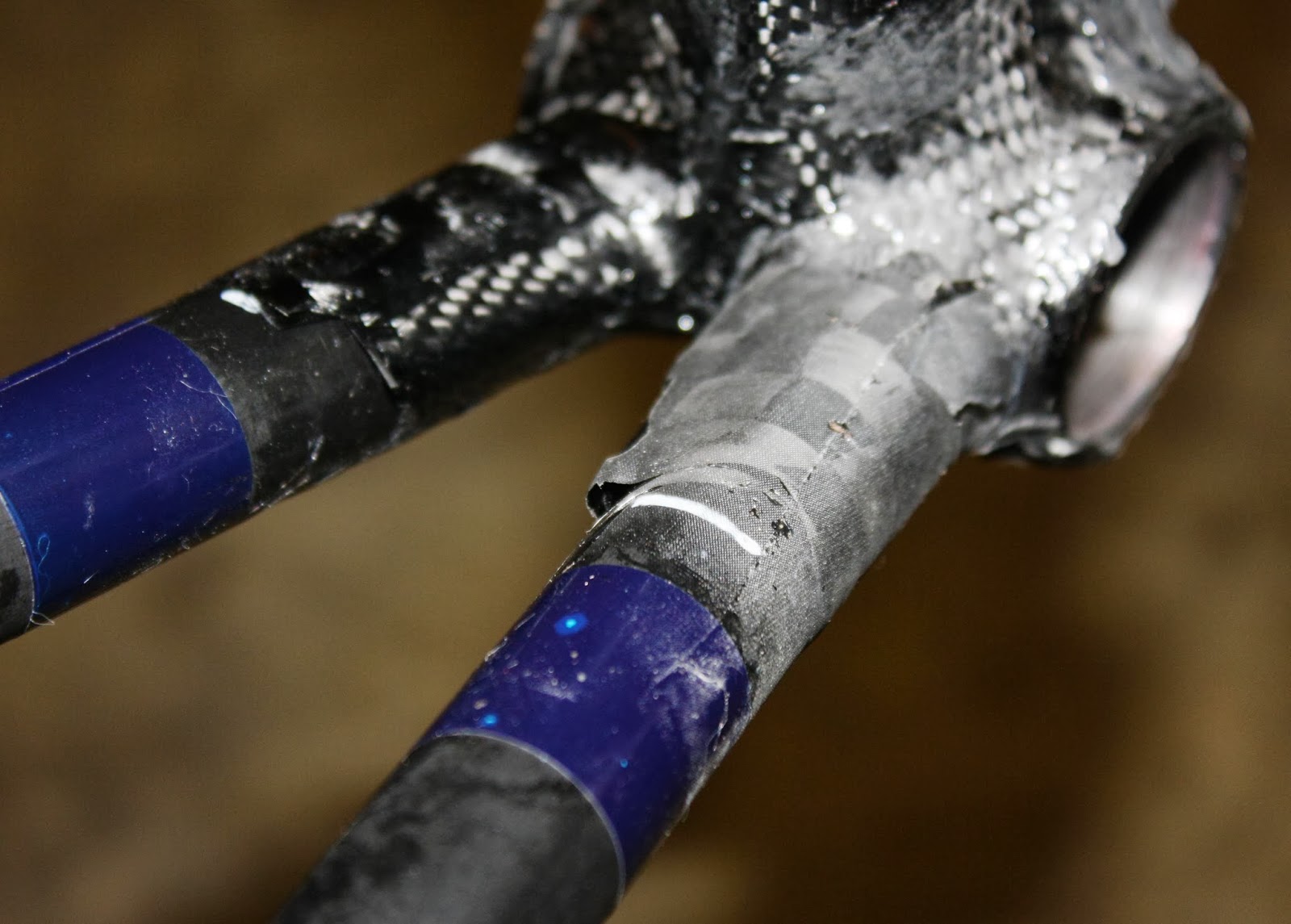 This is the bad spot I spoke of earlier.  See the air pocket?  I honestly don't know how that happened however I'm assuming as the vacuum bag pulled tight an air-pocket formed and it cured that way.  Anyone care to enlighten me more? 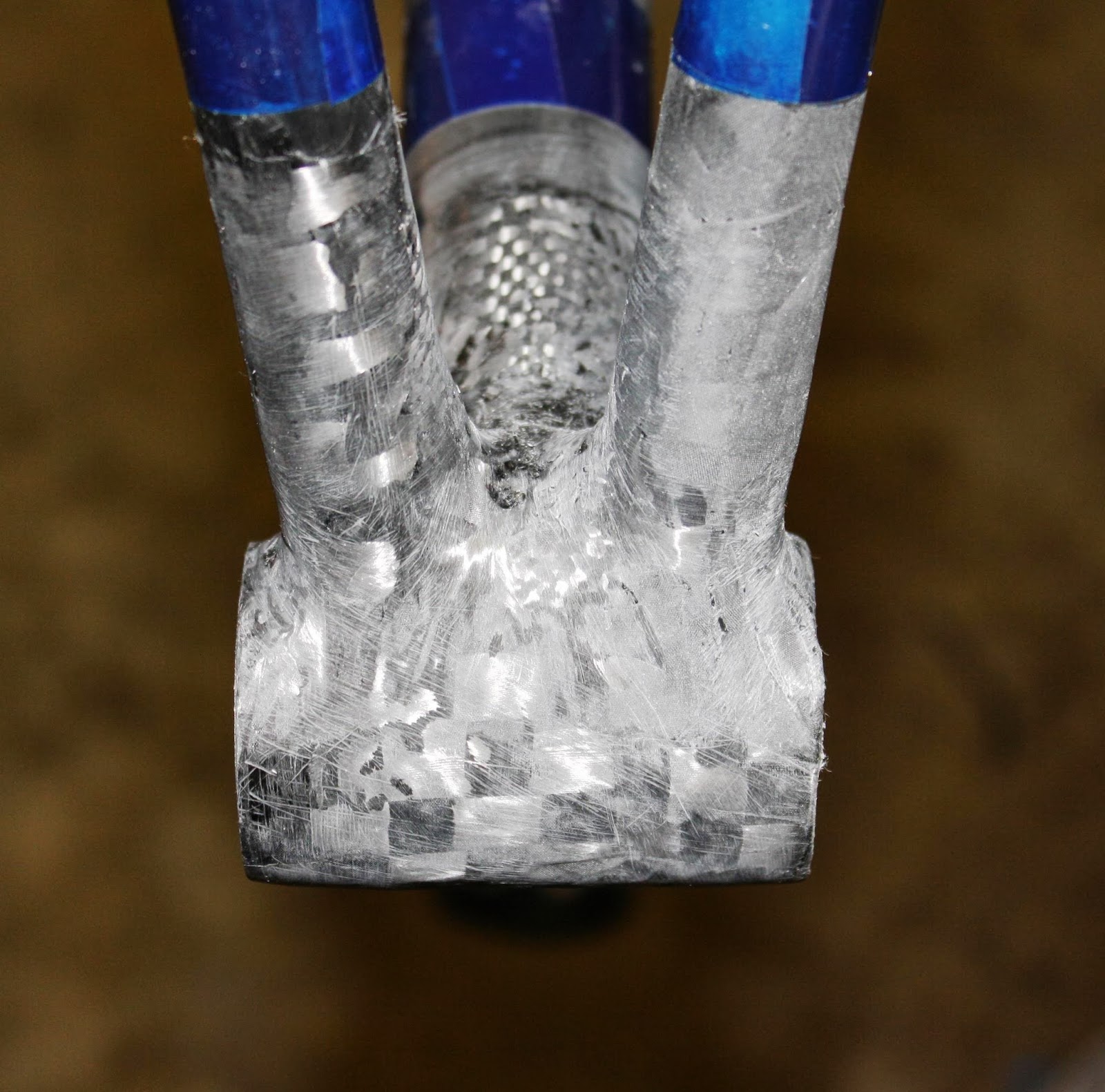 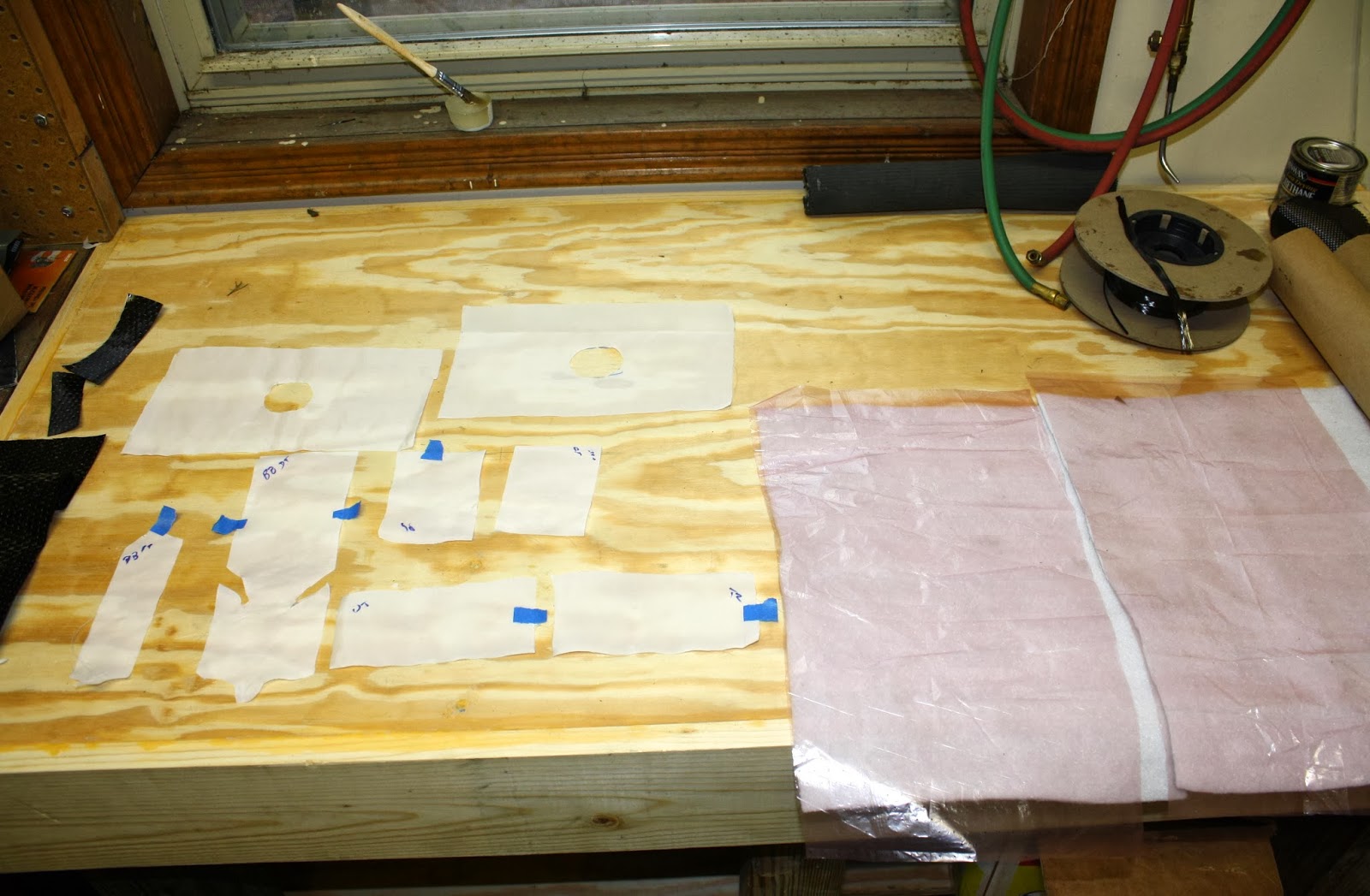 Ahh, enlightenment!  A little pre-planning will go a long way.  I've learned that its best not to wait until after you've layed down the wet carbon to try and start figuring out how to cut the peel ply, so I tried to cut a few pieces that sort of fit the frame and be ready.  While these aren't a perfect fit (I don't think its possible) they are an improvement.  Just having a bit of a plan in place is an improvement over what I just did.  The more I play with this I think I'll eventually dial in the shapes.  Its definitely not easy making a flat piece of cloth lay down on a squellallellagram. Its a little like cutting paper-doll clothes, which I never did by the way.  I played with Evel Knievel and GI Joe with the kung-fu grip and his helicopter, which mine happened to be missing a couple of propeller blades because I climbed 30 feet up in a tree and tossed it.  "Houston, we have a problem."  Have you ever jumped out of tree holding a bubble-umbrella in a snow storm?  Don't do it.  Regardless of how much snow is on the ground the landing is not that soft. Did I ever tell you about the time I filled my Evel Knievel Sky Cycle up with gasoline and sent it flying across the ...., yeah I told you.  I'm running out of stories to tell. I need to make some more. Man, if you could've seen the look on my mom's face when she drove up to find the driveway in flames.  Some parents call their children a blessing, my parents used to refer to me as a nightmare with matches. The best way to describe me is to take a perfectly good bottle-rocket and break off the stick and then light the fuse.  Hope I never have any kids like me.  Uhh, guess what?  Nightmare! 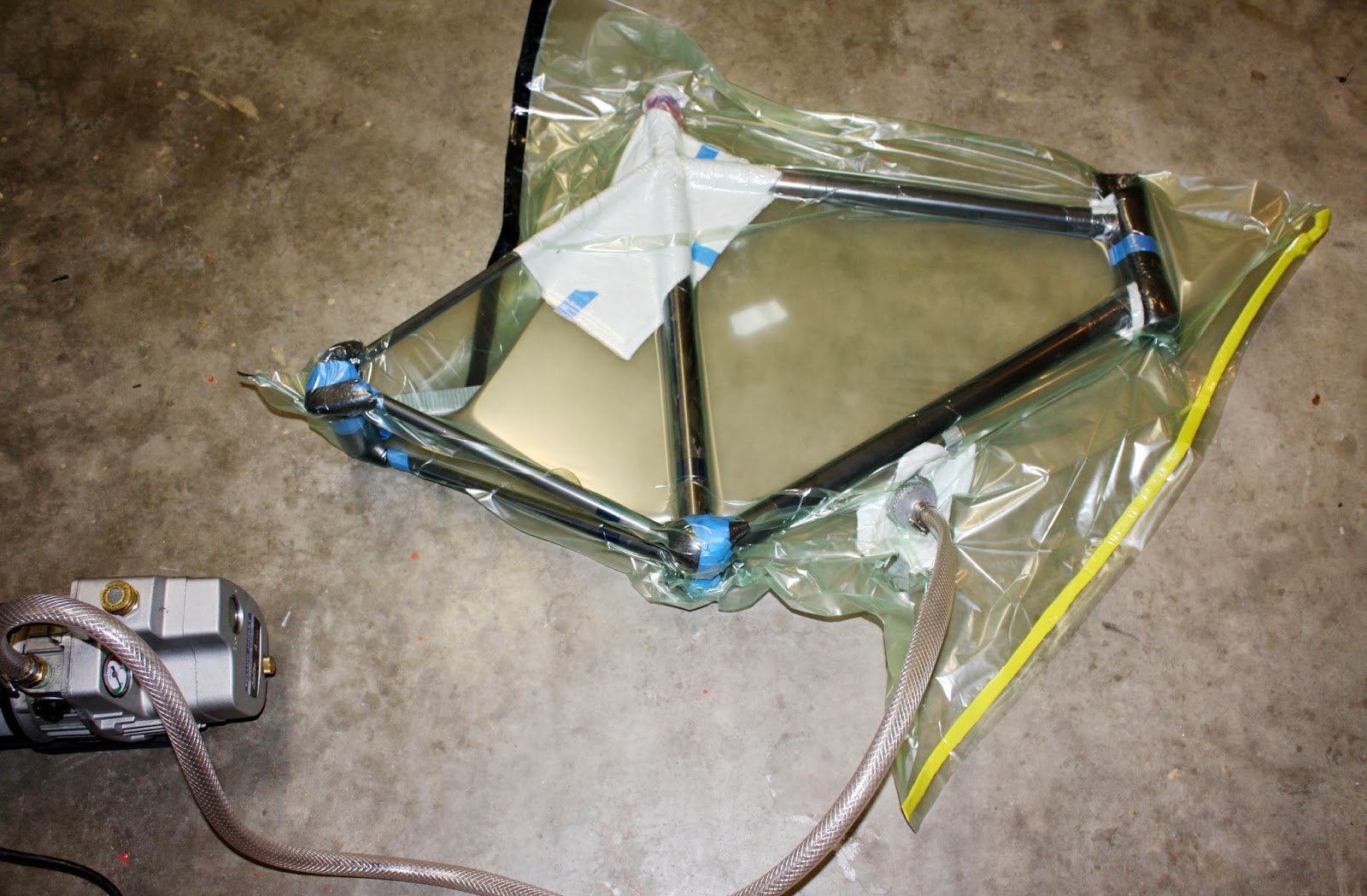 Remember this project?  You thought I had bailed out on it didn't you?  Nope, there will be no bailing out, only small delays, numerous small delays.  The good news is, everything is going pretty well, a little better than anticipated.  This is my first attempt at vac-bagging the whole frame and its much easier to do than just one small section.  If you make the bags big enough in the beginning you can use them more than once.  I'm only wrapping one section at a time in order to try and learn the best possible process for laying this stuff up.  Practice is key and each time I'm learning and getting a bit better.  Here are a couple of photos of the frame after coming out of the bag and then after I sanded and cleaned up the juncture. 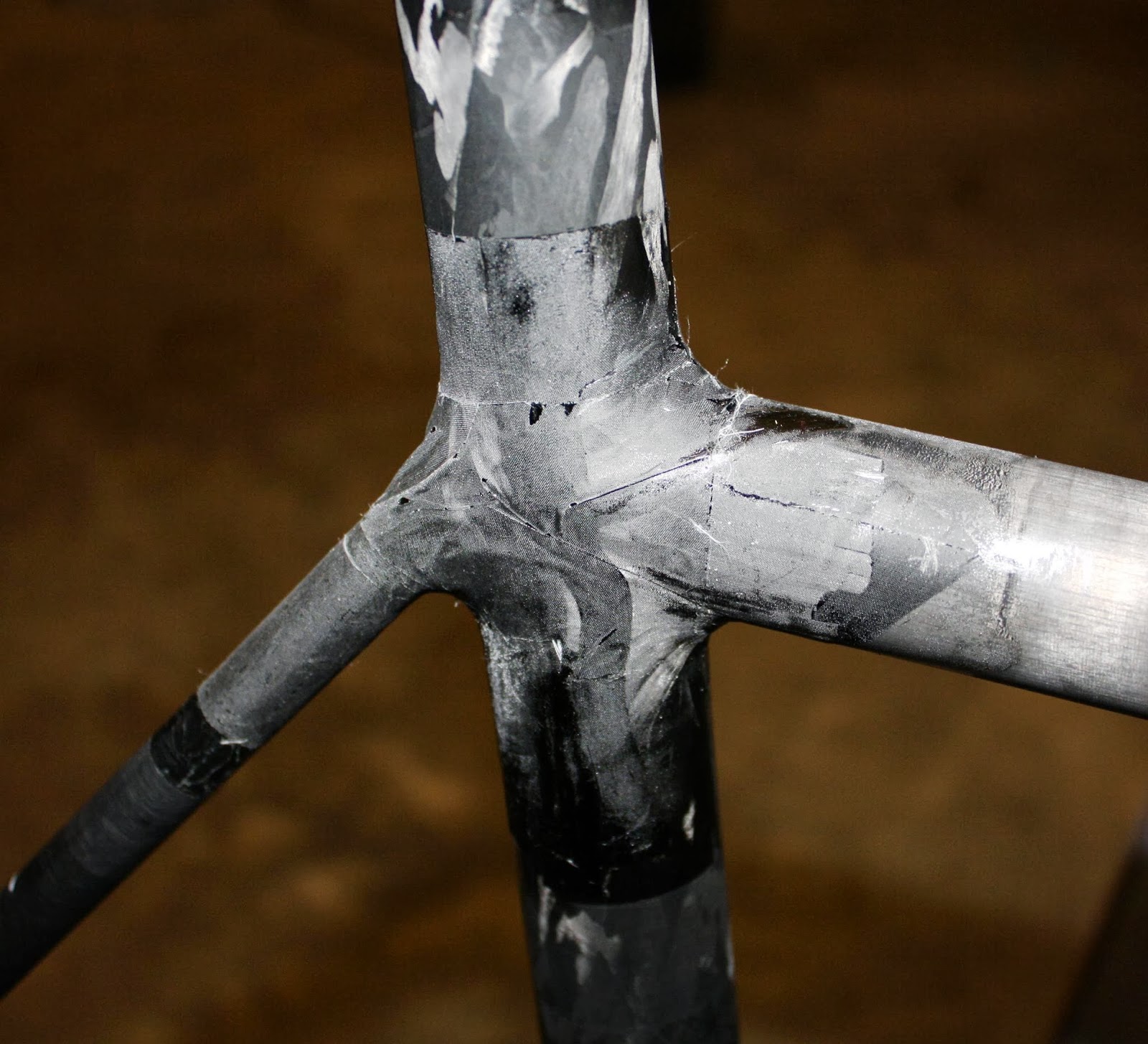 I was happy with this, its not perfect but I think its structually solid and I'm gonna add a cosmetic layer over all the junctures before its complete. 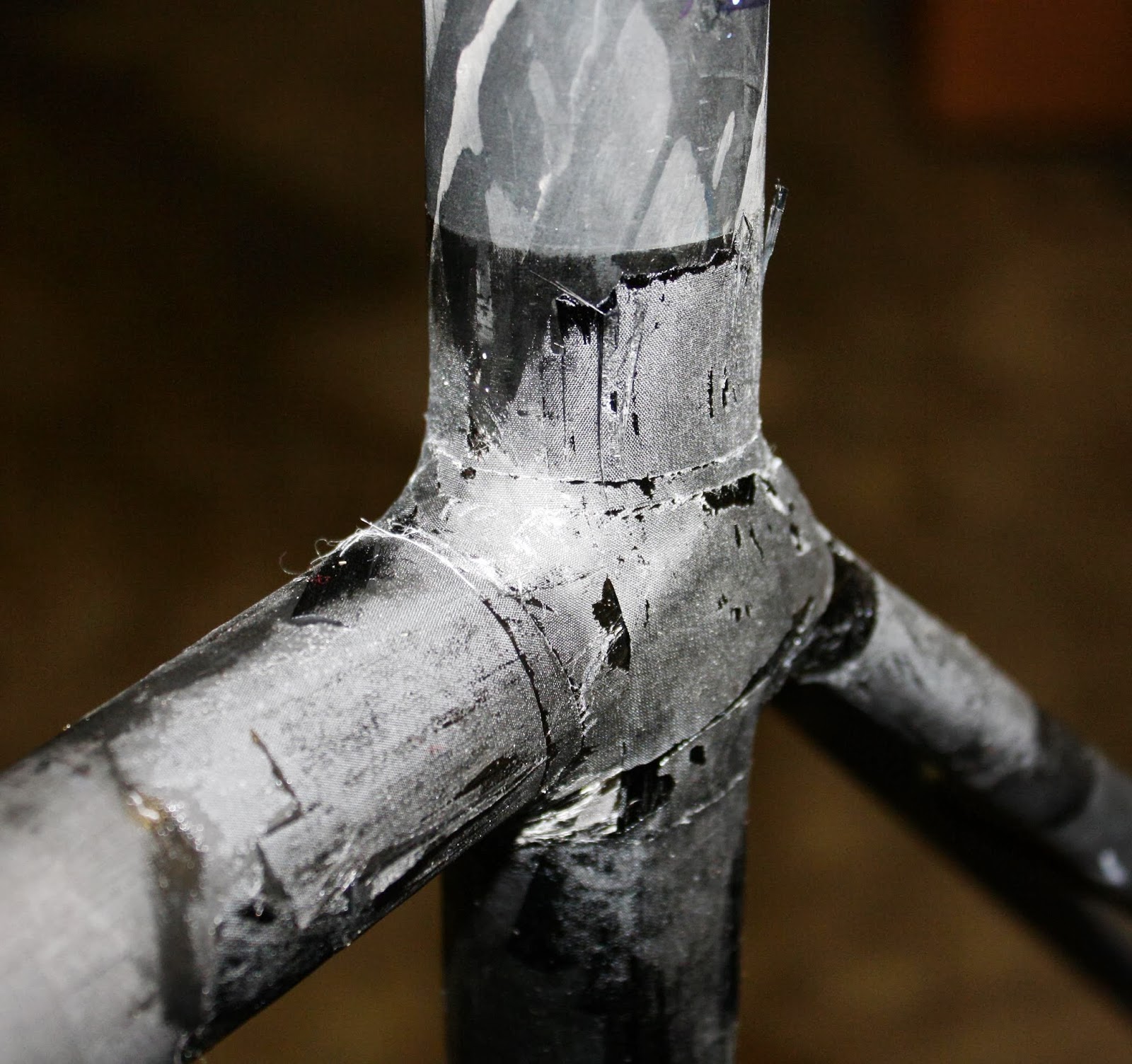 This side had a bit of a wrinkle but it wasn't too bad. It sanded out easily and after adding another layer or two should be fine. 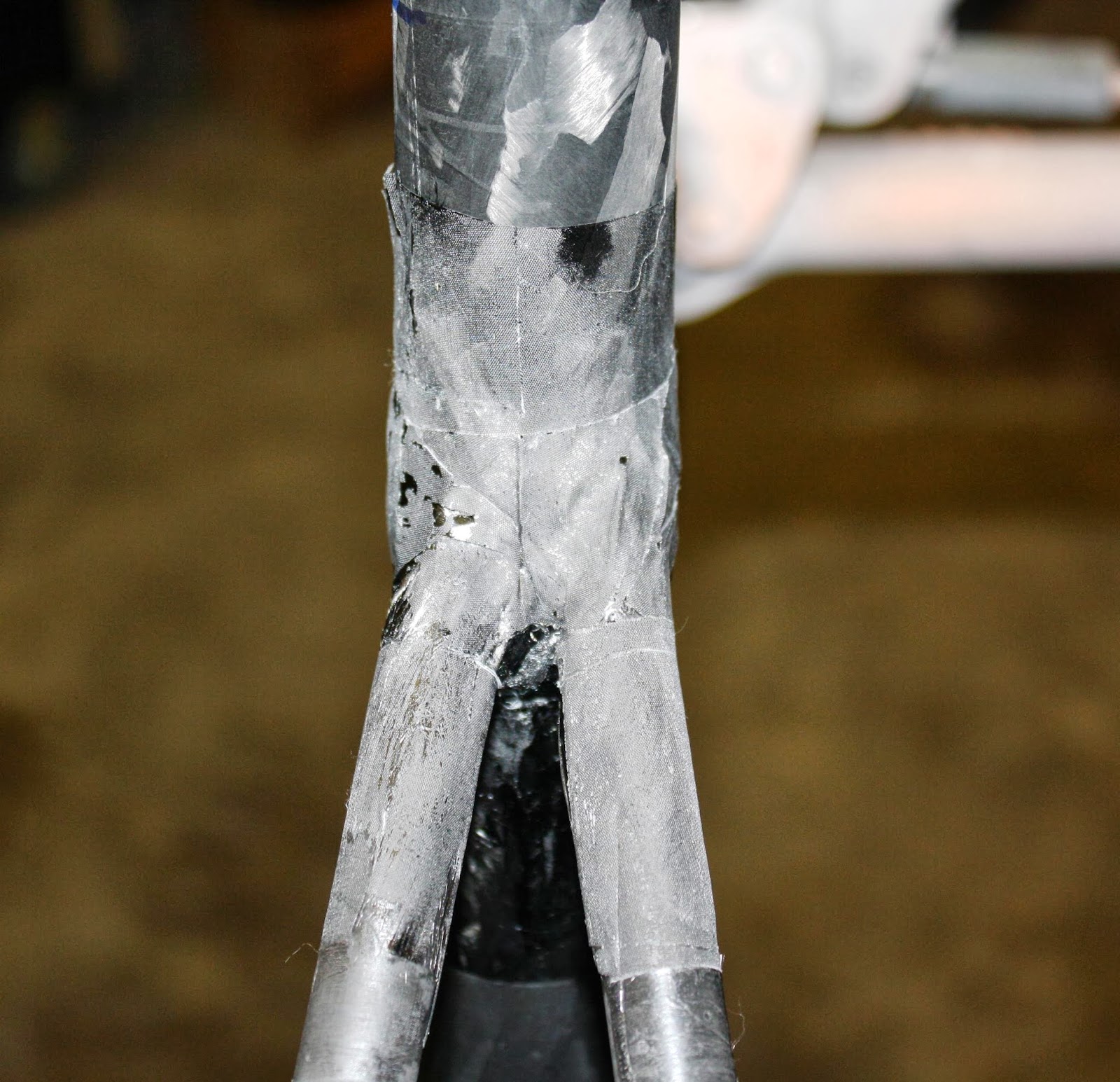 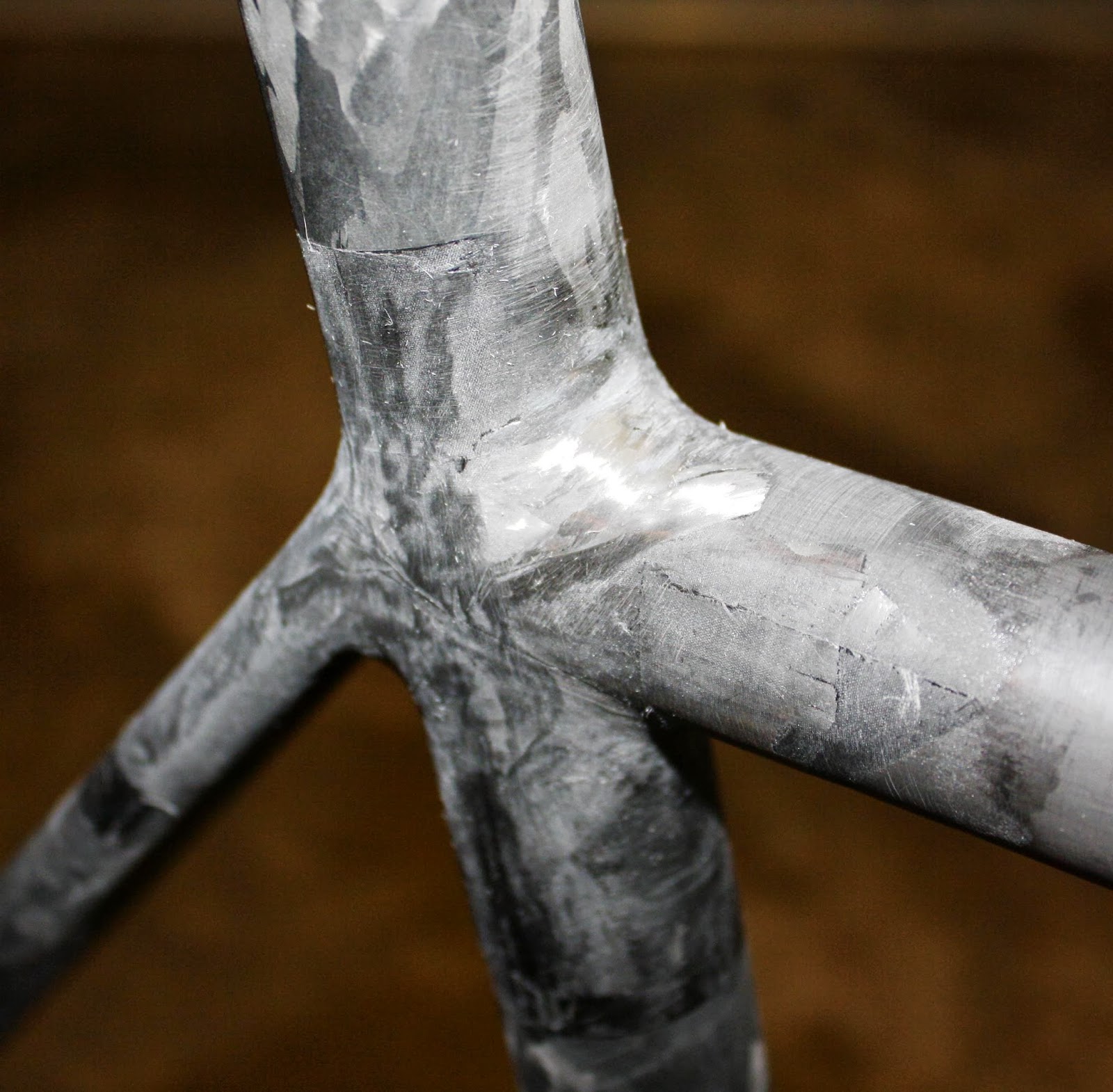 After being sanded, its smooth and not bulky at all.  This is probably the minimum amount of laminate that I would use and it will be plenty strong after beefing it up, however since this frame is for me I'm gonna push the envelope a little. 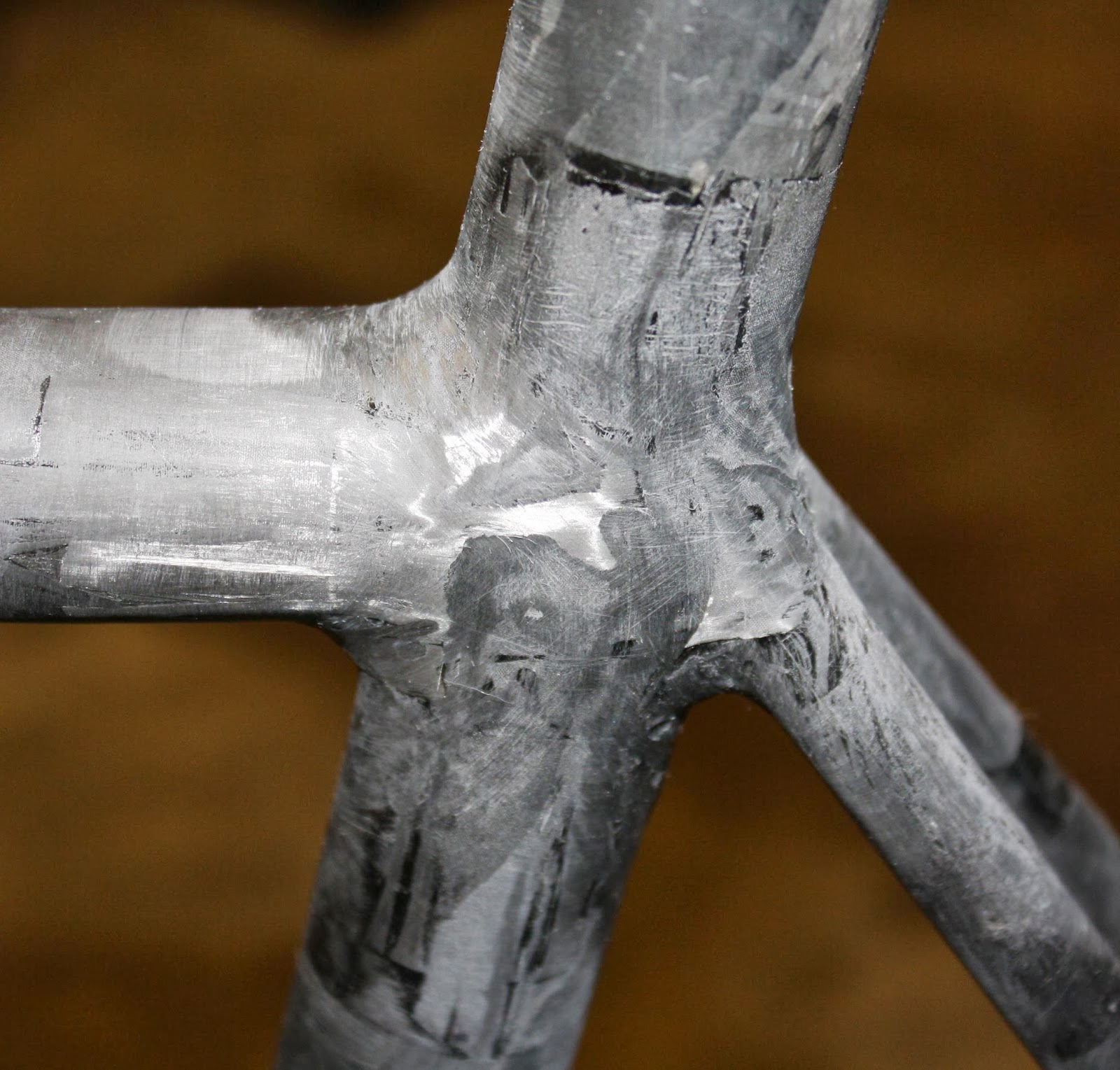 Just wipe a little Wrinkle Be Gone on and the wrinkles just, well, they be gone. I'm gonna start referring to this process as carbon fillet-brazing, like when Scott came out with their CR1 and labeled it 'carbon welding'. 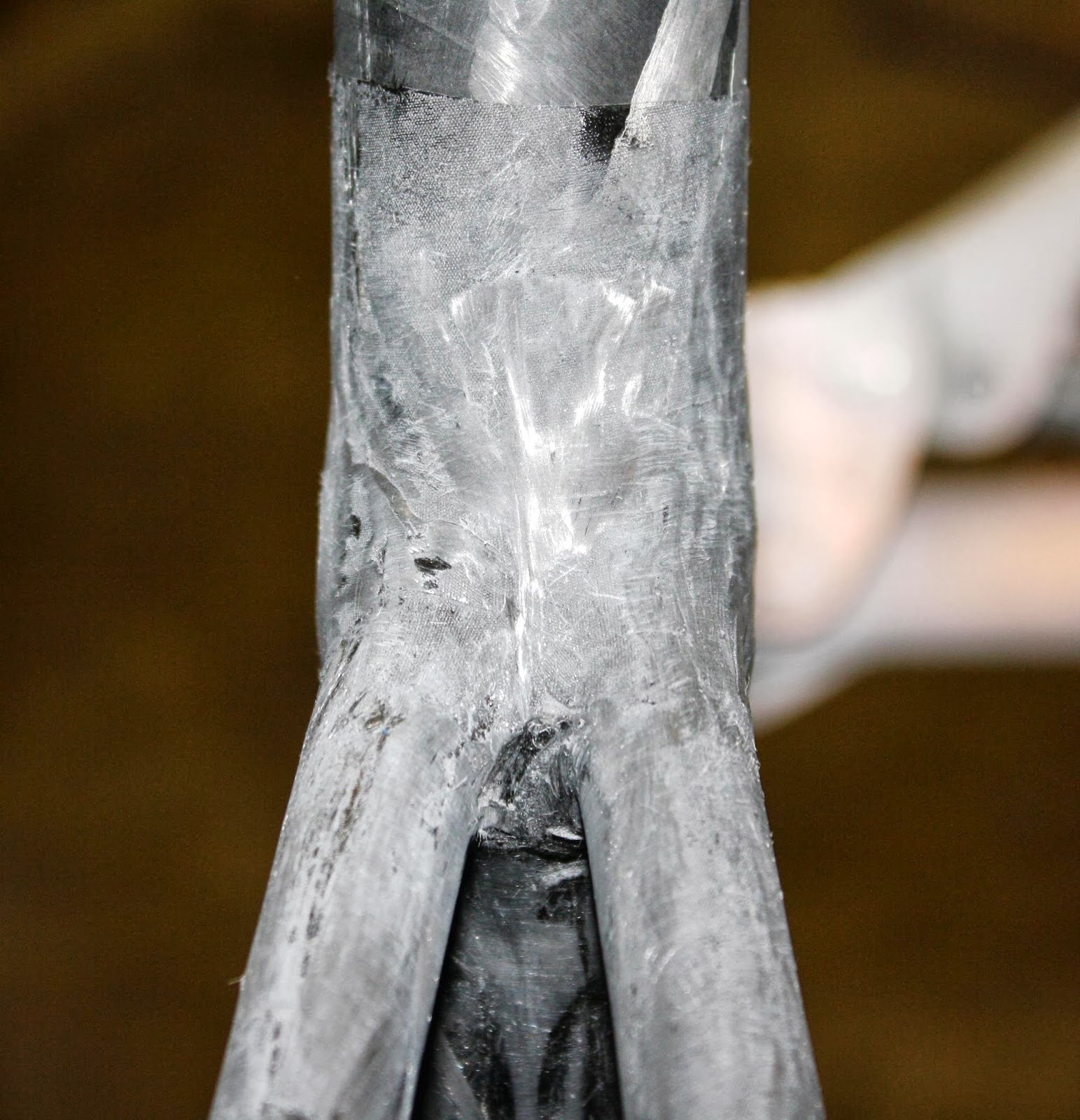 These photos are a couple of days old and I actually just finished the bottom bracket juncture yesterday. I don't have any pictures of it yet.  Most of it turned out ok however there is one bad spot on the inside of the right chainstay that will have to be sanded down completely and rewrapped.  A pretty big wrinkle got squeezed into it and it needs some work, so thats where I'm headed today, just as soon as I get my wife's car unstuck out of the driveway.  She basically slid it sideways last night and it about rolled off the edge of our drive which is not good.  Luckily its pretty secure at the moment and in the morning maybe the driveway will be melted enough to just drive it out.  Crossing my fingers.

Jess Parker and His MEECH at Cyclocross Nationals 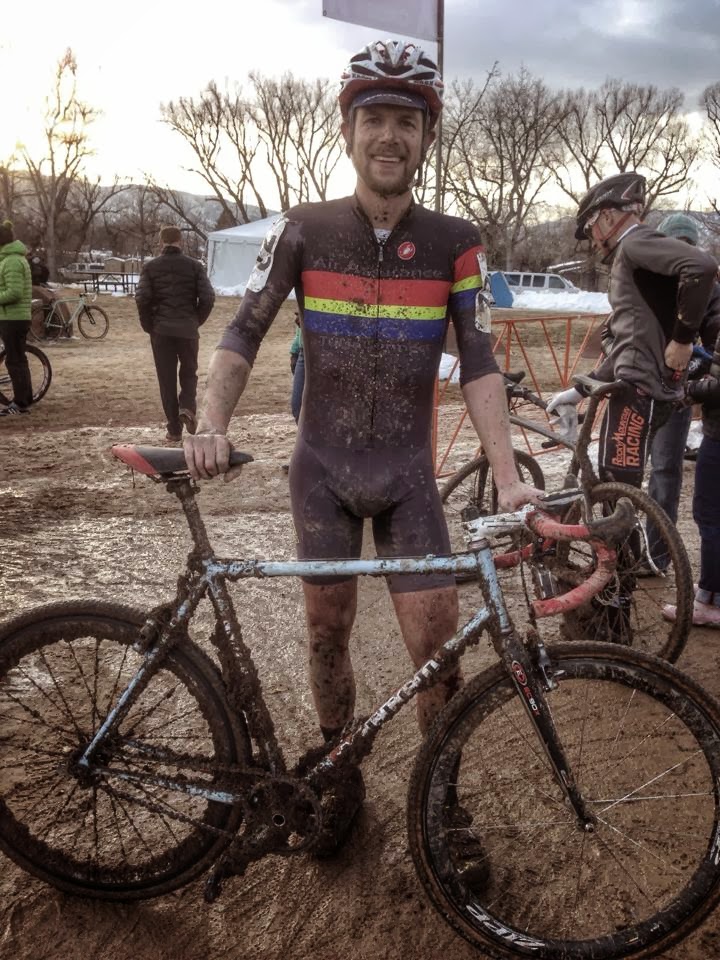 Everyone knows that I love seeing guys race their MEECH frames to the hilt.  Jess Parker is definitely one of those guys.  Look at that smile. Thanks Jess!