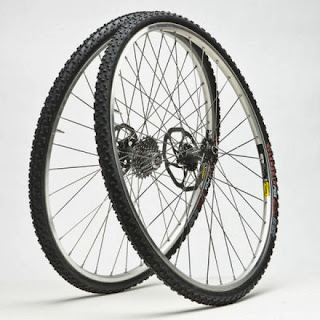 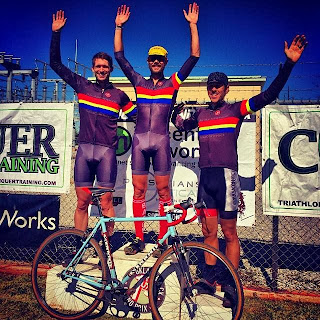 A good riding buddy of mine from my hometown of Jonesboro, Jess Parker, took first place honors in the Single-Speed class  at Crosstoberfest.  Jess was one of my earliest customers and he has been riding the molasses out of his MEECH for around 4 years now.  His riding/racing has been getting better and better these last few years as has my frame building but it always feels good to see one of your first frames still out there on the race course cutting ruts and getting on the podium.  Congratulations to Jess Parker!  Thanks buddy.  Love the hat! 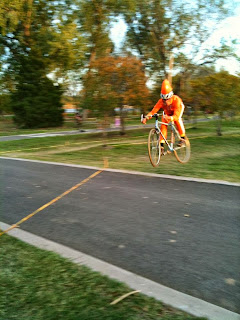 Here is an older photo of Jess airing out his MEECH.  I've posted this before but its one of my favorite photos so I break it out on occasion. 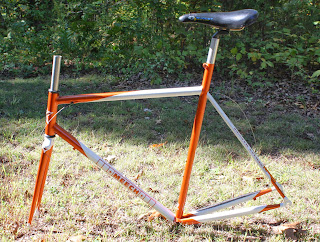 I finally put the finishing touches on this gravel road frame.  Bob Davis turned the integrated seatpost out for me and now it only needs to be fine cut to the individual. 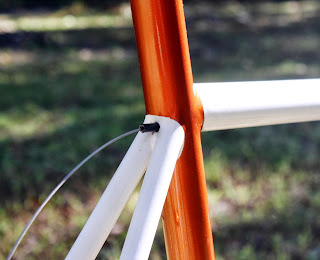 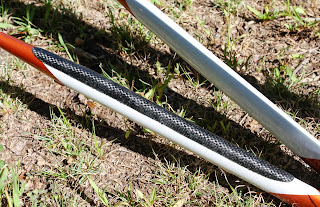 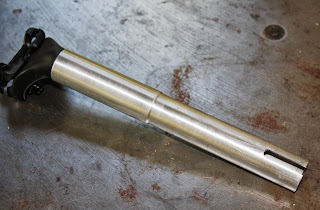 These photos show the seatpost and how it accommodates the housing passing through it.  Very simple yet effective. 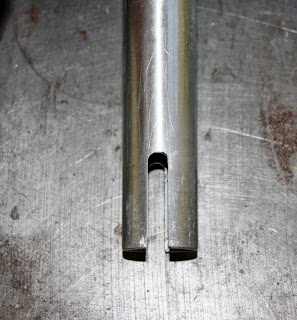 Bob cut it a little off center but it presents no problems at all as there is plenty of clearance for the housing. 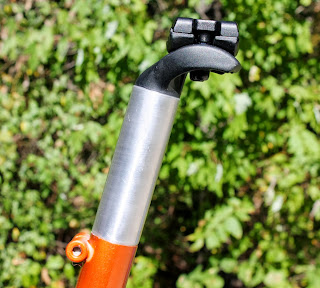 Finished look.  Until I saw this photo I didn't realize that I had missed a spot painting but you can see the while rearing its ugly head behind the seatpost binder.   Paint and photos are the 2 most effective way to find imperfections.  You can look a frame over until you're red in the eyes and not find anything and then 1 little photo can bring anguish to you.  I wasn't happy but its small potatos and I'll get it touched up.

Thanks for checking things out.  Have a good weekend. 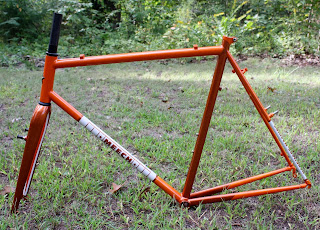 Here are a few pics of what I'm thinking may be some of the last painting I do this year.  Fall is getting close and once the temperatures drop down into the lower 60's I don't really have a way to get any painting done in the present facility.  My paint booth is a 10' x 16' storage shed, and while you could heat it I don't think you want to lock yourself into a small room like that and fill it full of paint fumes, the clearcoat fumes are even worse.  Inhale a few of those and you can actually feel little construction men going to work on your brain and nasal cavity with
jack-hammers.  Was the guy that invented the jack-hammer named Jack?  Is that the same guy that everyone is always referring to when they call you a 'Jack-Rod'?  I don't know but I'm drifting off the subject of bicycles and cyclocross really early into this post.  I used to bug my dad with all sorts of crazy questions and he would always reply, "I don't know, but do you want to know what i do know?" And of course i would always say yes, and then he say, "...is that I don't know."  And then I would say, "Well I knew that."  Ok, thats enough.  Its only been 3 minutes since I started this post and I've already forgot what I was gonna talk about.  Oh yeah, last paint job of the year, maybe, probably, unless I find a climate controled paint booth.  "Hmmm, spare bedroom?"  Better not.  Last winter I tried to pull off a little paint job in the laundry room and besides wreaking up the whole house i couldn't taste food for a week.  Is that loyalty to frame building or what?  I'm willing to die for these frames, although I'd rather it be a bit further down the road as I haven't dialed in the carbon process like I've always wanted to.  This post is officially back on track starting now. Thats what I wanted to talk about.  While I've always talked about learning how to build carbon frames I just haven't had the time.  I would always take another order for someone and then I also had to learn how to paint starting about a year ago and that derailled my carbon dreams up until now.  So what I've decided to do is to stop building steel frames for a while and work on dialing in the carbon process this winter and hopefully this spring I will be good enough to offer both types of frames, then with Spring I can start painting again.  Thats the plan.  I only have 2 more steel frames to build and then I can get started.  While I've built a couple of carbon frames by just doing it the best way that I could I would really like to dial in the vacuum-bagging process.  I've spent just enough time doing it to make it seem really frustrating.  Its gonna take some time and patience but it'll be worth it, afterall, its educational.  While I truly feel that nothing will ever ride as good as a steel frame and fork, the more performance oriented road racers prefer carbon fiber and thats totally understandable, I'm like that myself.  However, I've found that when it comes to cyclocross frames, the custom builders are building steel cross frames that don't weigh much more than carbon frames.  Larry Yancey's complete cyclocross bike weighs only 17 lbs. and you'll be hard pressed to find a carbon or ti cross bike that light.  The honest truth is that I just like learning new things and I want to be well-rounded, in steel and carbon that is, I don't give a flip about ti or aluminum.  Those materials just don't interest me in the least at the present moment but should they in the near future I'm sure I'll be all up in it. 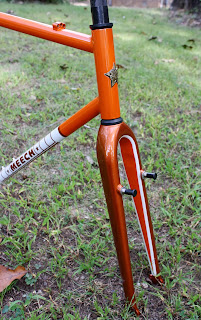 What color is this frame you ask?  Its Tangerine Pearl and Toxic Orange or Mango Tango,  whichever you prefer to call it with some white thrown in there as a backdrop.  Check out the inside of that tri-color fork, I was very happy with that.  I had some of the Tangerine left over from the last frame that I built and I've also had this Toxic Orange laying around for a while so after going around and around with about 10 different paint scheme ideas I finally decided to go with this.  I was actually thinking of doing the frame in orange, gold, and red.  Then I was thinking orange and yellow (its gonna look like fruit) and then I bailed on that idea, and I finally settled in with these colors because its two colors that you'll probably never see together.  Oh yeah, I'm definitely gonna paint a frame in yellow and Toxic Orange in the coming months, I know those colors are gonna look sweet together.  Don't tell anybody though, its gonna be our little secret. 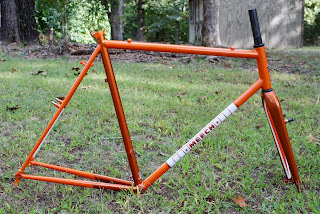 That must be the wood shed that people are always talking about when they say, "I'm gonna take you out back to the wood shed and teach you some manners."  Just kidding, thats the paint booth.  Its actually plenty big to do quite a bit of painting however I keep forgetting that the door is only 6 feet tall.  I'm 6'2" and luckily I'm always wearing a cycling cap.  Its not much protection but so far its been just enough.  My Uncle Johnny (dad's twin brother) used to be a police officer in Memphis and worked in the stolen car department.  Once he was arresting a guy and told the guy to put his hands up on the car and while my uncle was frisking him he picked up a monkey wrench out of the car seat and hit my uncle with it over the head.  My uncle said it almost knocked him out and the guy just stood there waiting for him to fall over but apparently the policeman's cap was just enough protection to keep it from splitting his head.  Then as my uncle's wits were coming back to him he said to the guy, "Buddy, you shouldn't have done that."  I'll just leave the rest of what happened to your imagination.  Both my dad and Uncle Johnny were Golden Glove fighters. 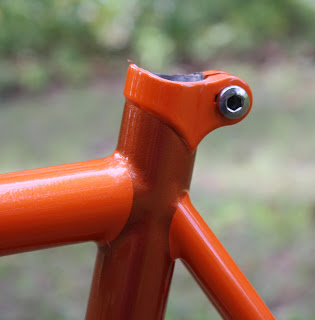 This photo shows the contrast of the two oranges. 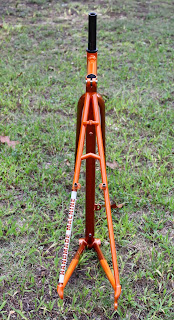 Technically its not a handmade machine just yet, but after you throw some sweet components on it thats when the transformation into machinedom takes place, and oh what a sweet machine the bicycle is. 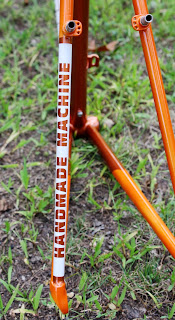 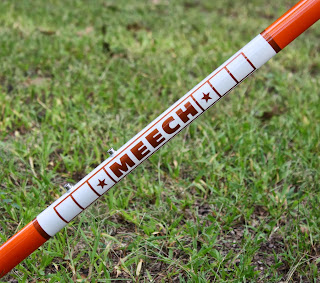 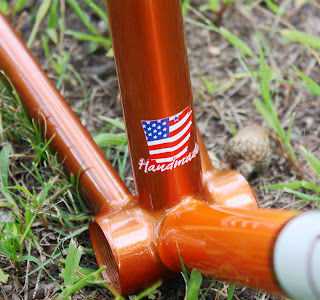 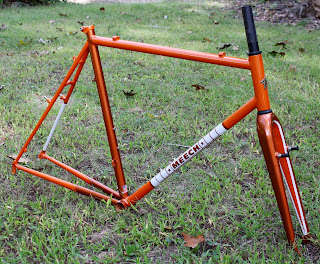