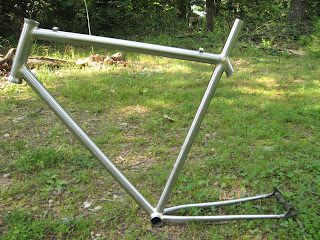 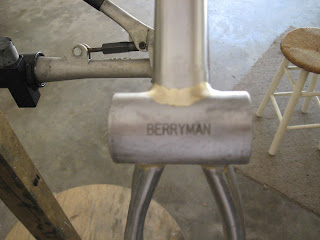 This frame has quite a bit of travel as of now however I think we need to tighten it up a little before Berryman jumps the bus. I am not sure it would have much rebound as is.
Posted by MEECH at 8:27 AM No comments: 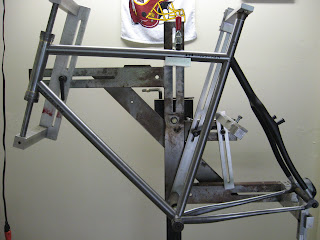 There thats more like it. Ready to start brazing this thing up so that I can cut it up.
Posted by MEECH at 7:05 PM 1 comment: 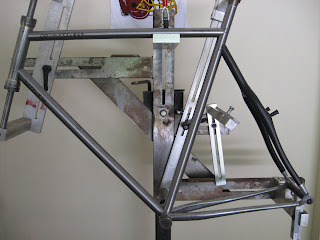 Moving right along. Basically got everything fitted except that we are gonna switch the 28.6 top tube with an oversized top tube to match the down tube and put a little slope in it to make sure its good an solid for that school bus jump.
Posted by MEECH at 7:04 PM No comments: 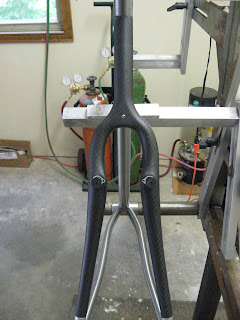 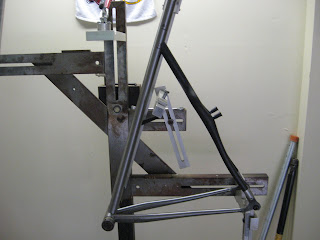 Here is the upstart of a new cross frame I am building for Brad Berryman. This frame is the first one that I have used carbon on so I am really eager to see how it turns out. We are using a Paul Taylor custom carbon seatstay and this thing is so solid I can't believe it, it would make for a good MEECHcross bike. This frame is special to me because its very similar to the style of frame I saw at a cross race 2 1/2 yrs. ago that made me decide to start building frames. There was this sweet looking Bianchi that had a carbon rear end with an aluminum main triangle laying against a tree and I was checking it out thinking, "Man, all I would have to do is weld a main triangle together and glue in a carbon rear end and "Wallah" I built a bicycle frame." Well, building a bike frame is much harder than that, thats why its taken me over 2 years to get to this one. Anyway, Brad called me up about a frame and basically told me I could "wing-it" so here we go. Along with that fat, carbon seat stay we are gonna insert some carbon tubes in the top and down tubes, that means build a steel frame then break out the chainsaw and slice it up and glue it back together again with some high-tech stuff, kinda like the Six Million Dollar Man. Its gonna be bionic alright and I am only charging 2 million dollars for it, what a steal. MEECH, always giving you more for your money. Stay tuned for this one because Brad said when its finished he is gonna jump a school bus on it.
Posted by MEECH at 4:50 AM No comments: 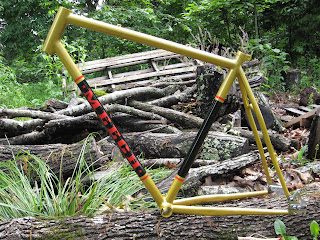 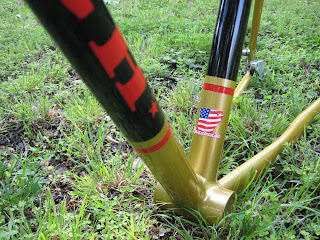 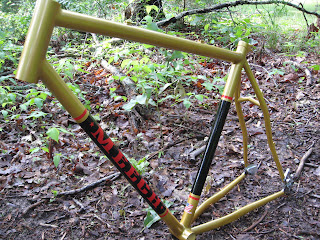 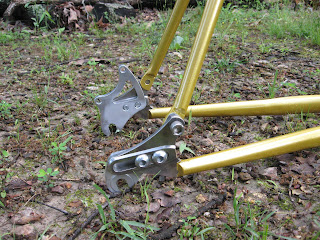 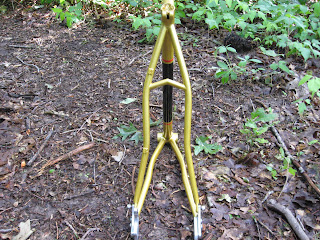 Here is the second 650B mountain bike frame that I just got back from paint. This one contains semi-removable seat stays as well to accommodate a belt-drive setup if you so desire. I didn't really know what colors to go with on it so I just took it over to Ace's Wild Custom and told Paul to wing it. He makes slapping it out of the park look easier than putting mustard on a hotdog. He painted the name on this one as well and I love the way the red letters stand out. Check out those Paragon stainless sliding drops. Fixing to go throw a shiney new bronze head badge on this dude. This thing is fun to play with even without wheels, just wait till it gets built up. Don't have a name for this frame yet, how bout Jamona.
Posted by MEECH at 2:57 PM No comments: 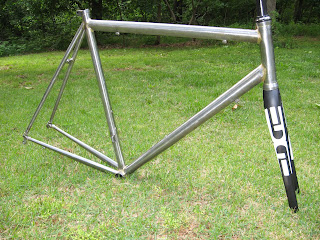 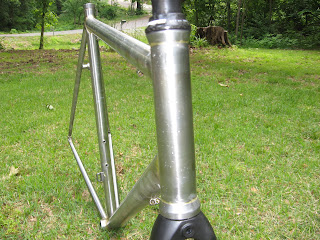 Here is the finished S3. Frame, fork, and integrated headset with an uncut steerer tube tips the scale at 4.3 lbs. in size 58cm (big boyz size), not bad. I'm stoked! Got a special paint job planned for this one. Check back. Chao.
Posted by MEECH at 6:45 AM No comments: 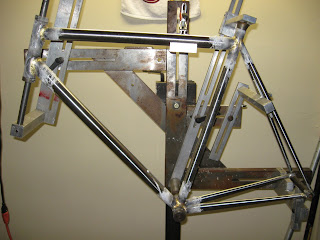 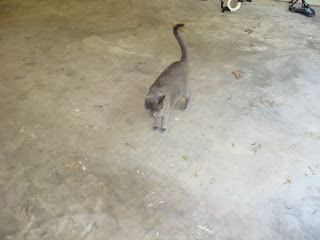 This is Smokey the cat in the shop with the new S3 Superlight road frame I am finishing up. My wife is always wanting me to include the animals in the blog so hopefully she will see this. This is the first frame that I have used all S3 tubing on and I may keep this for myself since I don't have a road bike right now and I am curious as to how this stuff rides. The frame as is now is 3 lbs. exactly, but it still needs a couple of braze-ons. When the bike is finished hopefully its gonna be lighter than ol' Smoke by a couple of pounds. Actually there is a weight limit on the S3 frameset and Smoke exceeds the limit 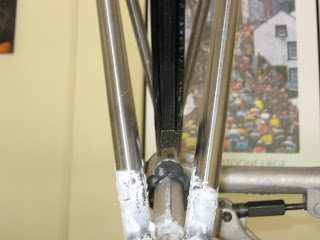 , he has no use for a road bike anyway because he is strictly a cyclocross cat. Stay outta the road Smokus! This frame is dialed in like one of my cheesecakes, the wheel is perfectly centered and this is what I shoot for on every frame. I am dying to get on a lightweight bicycle. I have been riding a 20 lb. cross bike for about 8 months in these Mountain Home hills and I am worn out, ready to do some climbing, thats why I am naming this frame "El Chava" after my favorite racer of all time, Jose Maria Jimenez, man could he climb. Viva "El Chava!" Gonna throw an Edge carbon fork and some Campy-11 on it and depending on the wheels used it should fall into the mid-16s range. As soon as this one is done I am gonna be starting on my first frame with carbon and I can't wait to start on that because I have been planning to do it for so long and just haven't gotten around to it but its coming. Stay tuned for the finished product. Chao. 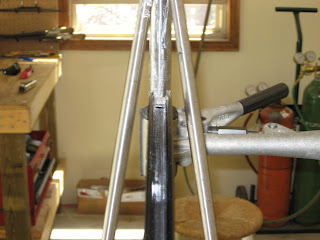 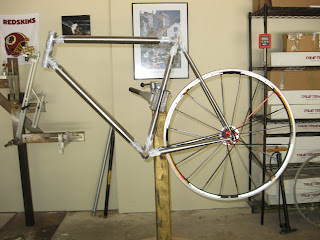