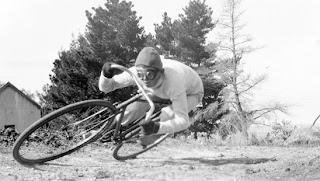 Check this cat out digging in on the descent like the horses are out of the barn. Not sure what kind of tires he's rolling but if he hasn't washed out yet at this angle, on a dirt road I mind you, they must stick pretty good, probably Vredestein 28c with about 88psi. I am pretty certain that those are Oakley goggles and I guess he turned down the Giro helmet sponsorship in exchange for the Knit Toboggan/ Jersey Glove deal. I can't see his shoes or peddles but I betcha a Coke his feet are tied to the peddles with a leather strap, hence the first stir-ups.
Posted by MEECH at 5:00 AM No comments: 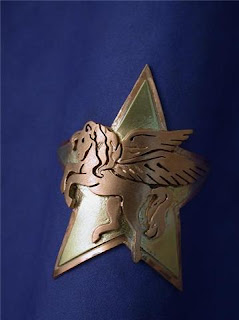 Here is a quick photo of the new MEECH Head Badge that I am gonna start using on all my frames. Jen, from Revolution Cycle Jewelry, is the artist behind this gem and she makes a ton of different stuff, all of it is treasure, truly first class. Check out her site, its worth the time.
Posted by MEECH at 9:35 AM No comments:

Video: Sven Nys Pre-riding the 2010 Indoor Cyclocross Course in Hasselt : Cyclocross Magazine - CX News, Races, Photos, Videos Check this out. Someone on the bike forum posted this video. Looks like MEECHcross may already exist to some degree. Its only gonna get bigger from here. Just a little bit faster boyz and we'll be able to clear that double-jump.
Posted by MEECH at 5:03 AM No comments: 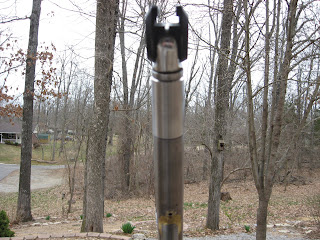 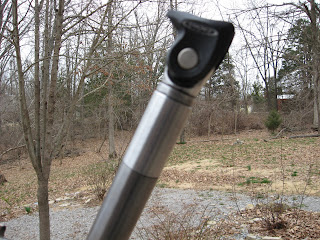 Here is a shot of my first integrated seat post design. Craig is a fan of the SDG style seat/seatpost design and after checking it out I am too. Single-bolt design with plenty of adjustment makes this a sweet setup. I have to thank my friend Patrick from Quality Machining for milling this thing down to perfection. It is also gonna have a set of 3 stainless spacers 2.5, 5, and 10 mm to give a little seat height adjustment. I want one for my bike now. Stick around, its fixing to go to paint.
Posted by MEECH at 10:22 AM No comments:

Quiz of the Day 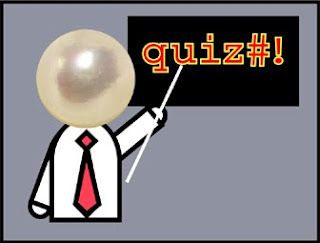 If someone is riding their bike while sitting on the handlebars facing toward the rear wheel are they riding backwards or forwards?, and should they go through the windshield of a Ford F-150 pick-up, does that count 1 point or 2?, and should the rider of that bicycle be put into a coma for 20 yrs. but comes out and makes a full recovery, is that funny or not? I know the answer to the first two but I am having trouble with the last part.
Posted by MEECH at 6:18 AM No comments: 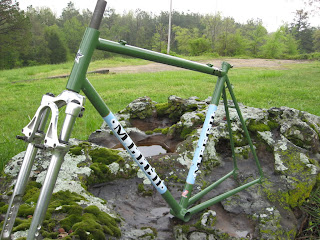 MEECHcross is coming! Heres the proof. There is gonna be live music by SuperJizz and The Pistol Lickers and the halftime show will include Bicycle Jousting. Bring lots of bandages. I need someone to operate the Flaming Turkey Slingshot and to drive the suped-up Pacecart. Applicants must be inexperienced.
Posted by MEECH at 4:33 AM No comments: 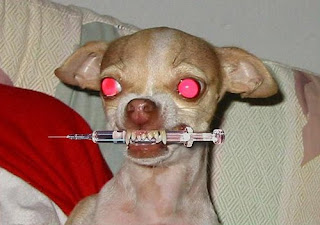 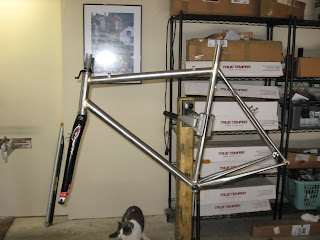 Craig Winnie's cross frame is getting close to done, just waiting on the integrated seat post to be machined and then a quick trip to Ace's Wild Custom for some paint and it will be ready to be built up. I stuck the fork on just to check out the integrated headset system because this one is the first integrated frame I have done. Its a warm, snug fit that turns like its greased with butter. The Alpha Q fork is gonna get some custom paint as well. FSA makes a sweet cyclo-specific integrated headset so we couldn't pass that up. Check out "Louis the Cat" making this an action photo. Chao.
Posted by MEECH at 10:42 AM No comments: 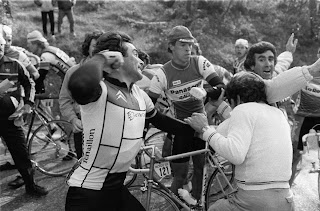 Here is a photo that velonews posted from one edition of the Paris-Nice race, I just couldn't pass this one up. Is that a woman that ol'Bernie is hitting? Hey, when a guy has a nickname like "The Badger" its best not to mess with him. Looks like the Panasonic rider took a shot also but it looks a little weak so I guess Hinault wanted to show her what a real man is. Bet he wishes he could take this one back. I like the guy in the background with his cap on backwards taking a breather, not even fazed.
Posted by MEECH at 3:45 PM No comments: 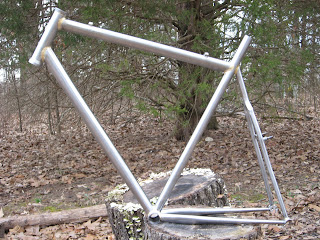 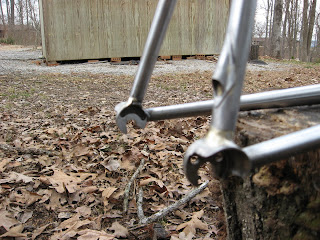 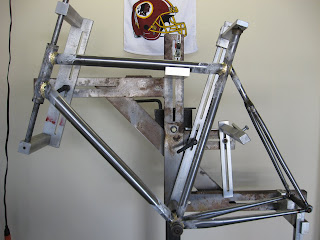 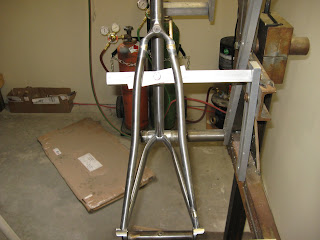 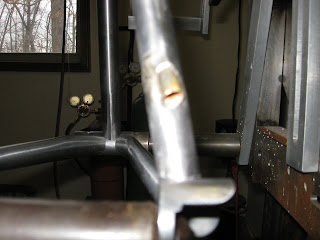 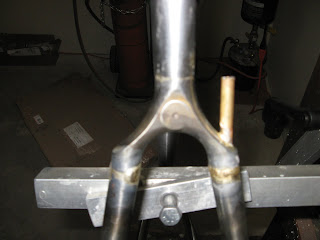 Here are a couple more photos of Craig's build. He wanted to have the rear derailleur cable running internally through the seat stay so with the help of my good friend Bob Davis, who is one of the most unique individuals I have ever met, we made it happen. Bob is an expert machinist here in Mountain Home with tons of experience building motorcycles, airplanes, bicycles, and no telling what else. I go over to his shop whenever I can because I learn something new every time I am there. The first time I went to his shop I was standing around waiting and just kinda checking things out when I noticed a blue-print of some sort of bike thing amongst all of the thousands of pounds of steel tools laying around and when he came out I asked him, "What is this? Turns out it was a blue-print to build a replica of the first ever steam-powered motorcycle. Then, he takes me into the back of the shop and shows me all of his custom motorcycles. I tripped out and if you saw it you would too. There is a youtube video of a steam-powered motorcycle, I will try to find it. Long story short, the internal cable routing wasn't a big deal to him but he did say it was sweet and coming from him thats a nice compliment. I am very lucky to know him because right up there with Koichi Yamaguchi, Bob has taught me many things that have improved my frame building drastically. Thanks.
Posted by MEECH at 9:53 AM 2 comments: