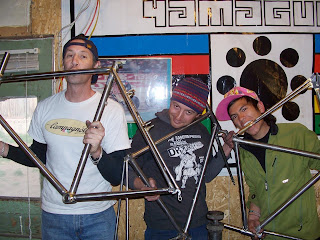 I was going through some old pictures the other day and came across these from the Yamaguchi frame school. This was the final day of frame building. It was over 3 years ago and I never would have thought that I would still be building frames, however,  building frames was the original idea behind going  so I guess things are rolling along as planned.  Judd and Will were the other two students with me.  Check out those 50 caliber shell casings brazed into Will's seat stays.  While Koichi & Will were hollowing out the shells for brazing Judd was out back trying to ignite the caps with a hammer.  Way louder than what anyone was expecting, just ask Rosco, he was under the table for a couple hours after that. Dangerously custom you might say.  Working with Koichi was a very memorable experience and I would do it again in a heartbeat, he's about as cool as they get.  If you ever get the chance to go it will definitely be worth your while.  Enjoy! 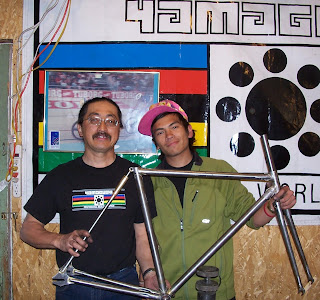 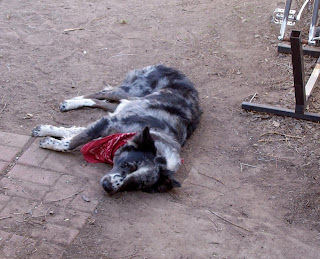 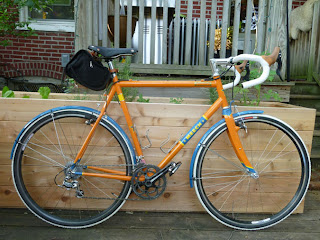 Here is Mark's Cannibal CX build almost completed. This bike is very tastefully done and Mark said the ride is responsive yet compliant so you can't ask for more than that.  There are a couple of personal accents that Mark had his painter add to make sure this custom ride was to his exact desired vision and they did a very nice job to make this bike the complete package that it is.  Enjoy the ride Mark and thanks for giving me the opportunity to work with you.  Chao amigos.
Posted by MEECH at 8:43 AM No comments:

Will It Ever End? 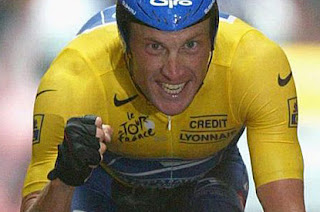 The number of people coming forth in the Armstrong investigation is stacking up.  Its been going on so long that I started ignoring it, sick & tired of hearing about it as it has no real effect on me and my enjoyment of the bicycle.  However, I have always felt that the truth should come out.  I have never really liked Armstrong and I would be lying if I said there wasn't a part of me that wants to see him get busted, thats pathetic on my part I know, but its gone even beyond that.  Now I just view Lance as a human, like the rest of us, clearly a much stronger cyclist though. Drugs or no drugs he is one helluva bike rider.  Since just about everyone from his era has been busted or confessed for using drugs its hard to believe that he didn't.  I was and still am a Jan Ullrich fan and I always hoped he would admit to using drugs so that I could still have some respect for him but I don't think he ever did.  Just admit it.  People will understand, forgive you, and have respect for you again, probably even more so.  My problem with it now is, and I guess my point is mute since the proof is not quite on the table, all the problems Lance is causing for all the people around him.  Teammates, coaches, and friends would have to be lying in order to protect him and his word.  Have you ever had anyone ask you to lie for them?  Nice feeling huh? Though now it seems like it has finally gone so far that no one can take the weight anymore. Actually its the pressure from the feds they can't handle, otherwise they could probably hold onto the lies, they have so far,  and I guess its only fitting that Lance should be the last one standing as it all  comes to a head.  As its already been said, they have wasted a lot of taxpayers money on this stupid case and its really not gonna change anything for us if they find him guilty or innocent, I would just like to see the end of it all.  Lay the truth out on the table and let the healing begin, the new era of cycling with riders who want to win cleanly and honestly, and I should also say that there were probably plenty of guys from the past who did race clean but never got the recognition they deserved because they weren't winning, so my hat is off to those guys for sure.  I used to look up to all the professional cyclists and I still do to some extent but not near as much as I look up to the everyday cyclists who just enjoy riding and racing and having a good time without drinking the junk to win.  All of what I think I know about any of this whole thing is pure speculation as I don't personally know nor have I met anybody that is involved in this, thank goodness.  The only fact that I have about any of this that I can tell you for certain is that this helmet is and always was way too small for Lance's head.  I hope he can accept that. The truth will set us free.
Posted by MEECH at 5:22 AM No comments: 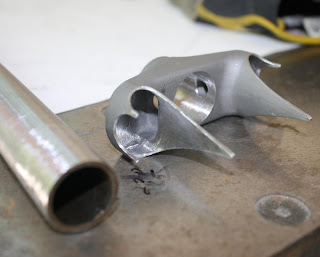 I have fallen behind a little on my blogging.  Man, I have been so freakin busy lately working on various things it feels like I'm not getting much done.  I live and build frames here in Mountain Home but I still have unfinished business in my hometown of Jonesboro, Arkansas as well.  I have been doing some repair work on a couple of rental properties and it has been going at about a snail's pace, but its coming together a little at a time.  My frame building business has gradually been growing and I am looking to cut ties with some of this other stuff I do to make green and focus more on frame building.  While building bicycle frames is what I spend the majority of my time on it doesn't pay all the bills by any means.  I have a ton of respect for anyone who is making a living building bicycle frames and I hope to stand among them one day, but for now I do whatever it takes to keep building.  Here are some pics of a touring frame I'm building for a local rider here in Mountain Home.  The last two frames I have worked on were for local riders and I have sold a recent handful of frames in the Arkansas/Missouri area.  Truth is, I don't care where my customers are from, I enjoy sending these things anywhere. I have the frame finished and I need to get this fork done today or by Monday at the latest.  You can see how clean the inside of the fork crown is, and I like to rough up the surfaces that are going to be brazed/bonded really well.  Millions of little tiny mountains and valleys are created with some 80 grit emery cloth so that the silver has something good to flow into.  Man, that sounded like poetry didn't it?  I guess that Creative Writing class I took years ago is paying off. I think I deserved better than a "D" in that class.  The first time I went to college, aside from the PE classes, most of my grades were in the C's & D's, one of the professors didn't even give me a grade at all, he said, "What was your name again?"  I said, "Look man, I have been coming to this class almost 2-3 times a month for close to 4 months now and you have the nerve to ask me my name.  This is outrageous!" Anyway, I went back to school a couple of years ago and got all A's except for one B in some history class. Even with all those A's my overall GPA wasn't much on the eyes. What does this prove you might ask?  Nothing really, except that I was really, really stupid when I was in my 20's. Did you ever see the movie "Up in Smoke?" One of these days I might tell you about my Zoology 1 experience. I thought I was gonna be a dentist. You ever tried to dissect a worm?  Sorry mom, not gonna happen. That professor actually told me that it would be better if I just quit, but I didn't, I went to that class everyday and earned that "F".  As my dad used to say, its ok if you fail just don't ever quit. Its all educational. 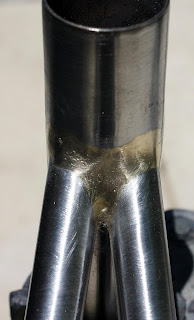 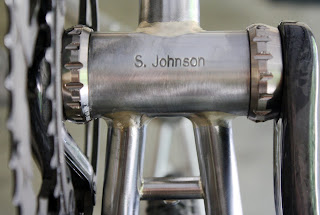 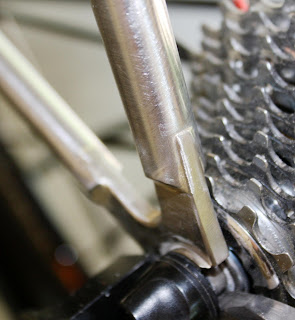 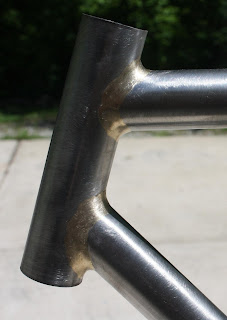 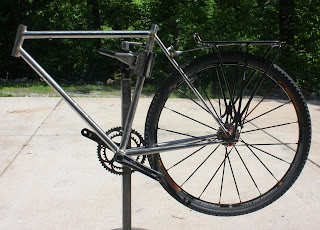 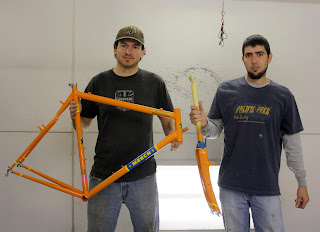 This is Paul and Wayne from Ace's Wild Custom. I met these guys a couple of years ago when I moved to Mountain Home and they have been painting my frames every since.  This shop is the coolest hangout in Mountain Home as far as I'm concerned.  Hot rods, stock cars, motocross bikes, shifter-karts, custom Harleys, helicopters, did I say helicopters?, ok I don't know if they've painted any helicopters but I betcha Coke they would, anything and everything comes and goes in this place.  These guys are super-cool and do excellent work on just about everything imaginable. Oh yeah, they do bicycle frames too.  Thanks guys! 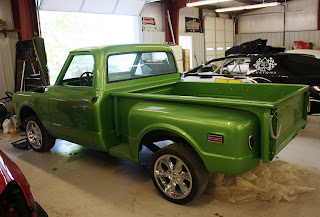 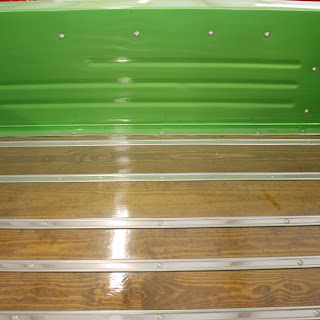 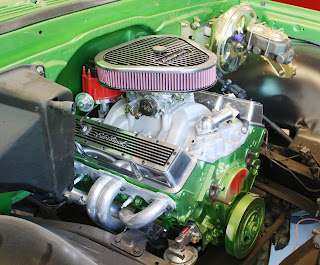 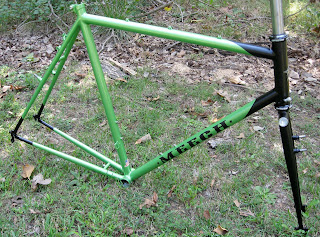 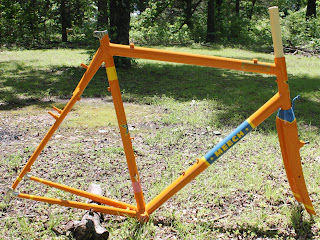 The paint has finally dried on Mark's 'cross machine and we're just gonna let the photos and the ride do the talking.  Once its complete with some Campy Chorus 11 its gonna be one sweet ride.  Thanks for checking it out. 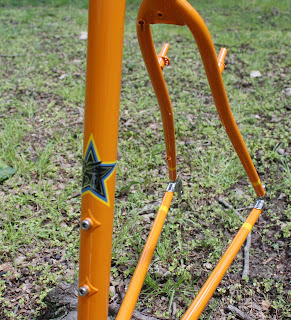 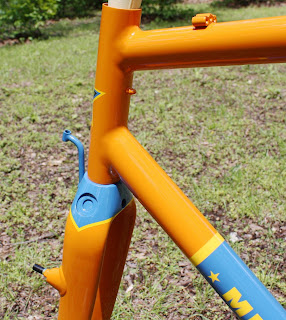 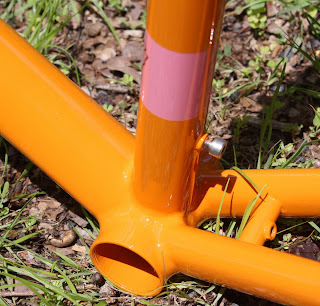 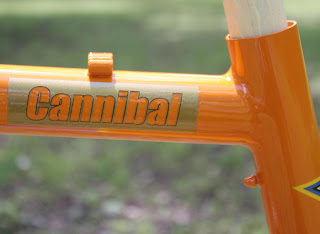 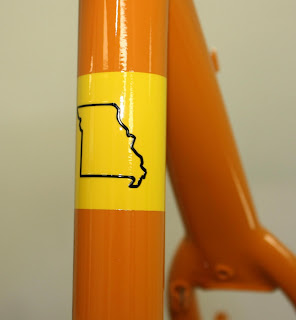 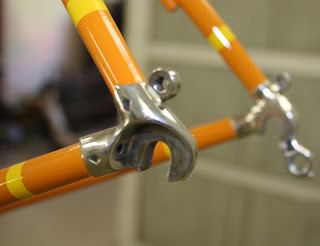 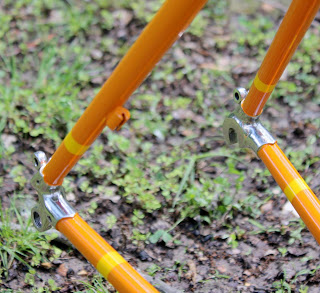 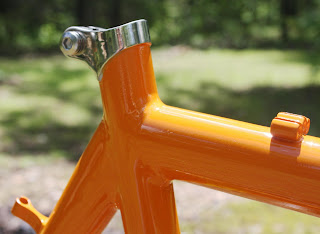 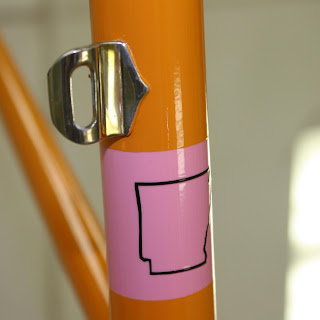 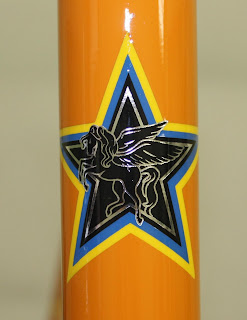 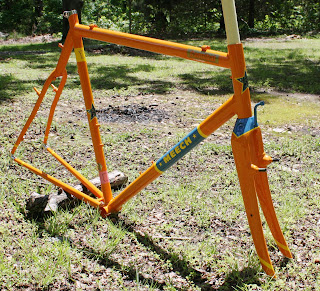 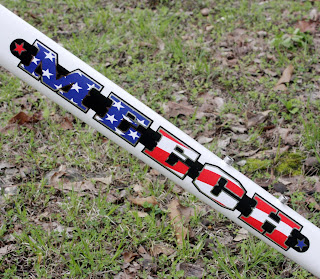 I don't consider myself to be much of a flagwaver because everyone is created equal regardless of where you are from but it is clearly a historic day for America.  Keep on rockin in the free world!
Posted by MEECH at 5:45 AM No comments: