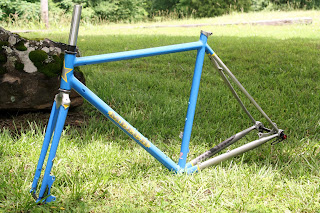 Finally got Jubail's frame finished up with the exception of the head badge and headset, which hopefully they're both in the mail.  This build has taken way longer than I ever imagined for a whole list of reasons.  Not gonna bore you with all the details but this frame build was a real learning experience. From my first steel disc thru-axle fork to the rear stays, I worked and re-worked to make everything fit. Even though this frame looks so sweet and innocent sitting here relaxing in the shade, under that French Racing Blue and Light Argent Silver is a beast of a frame that bent, molded, and whipped me as much or more than I did it. It was a pretty even match up though since we're both made of steel.   Truthfully, it wasn't that bad. There were just things that I was unfamiliar with, things I overlooked, and just lots of things in general to do that keep interfering with my focus. I was looking back the other day and reminiscing about all those times I used to get on the blog and ramble on and joke around and just have a jen-u-whine good time. Now I feel bad for neglecting this place so much.  It was like sitting on the porch step with friends in the evening. I feel so short of time these days that I can hardly see straight. My bike hasn't been washed since last fall, and my dog has pee'd on the wheel a couple of times. The chain is so stretched out that there are gaps between it and the sprockets so big that you can stick your finger through, but I wouldn't try to do it while you're rolling.  Ever done that? You know I have. Still remember the first time on that old Schwinn Scrambler I tried to put the chain back on without ever stopping. All I can say if you're gonna give it a dig is that i admire you for trying and I feel your pain. I can still remember laying on the ground on my back in front of the bicycle while my hand looked like it was still trying to put the chain on behind me, with a couple of sprocket teeth biting into my fingers nontheless. That was the most messed up party I've ever been to.

Let's go take a look at this frame because I've wasted enough of Jubail's time. He has been extremely patient and laid back throughout the whole process and I thank him.  I've always had the best customers in the world and that's why I'll never quit building frames. Vamos amigos. How bout that Giro de Italia? 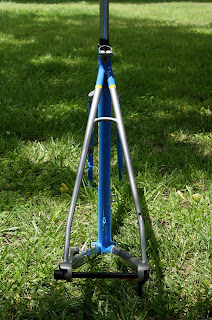 Everyone loves a sexy rear end. This rear end didn't look like this in the beginning.  I tried using straight stays at first only to find out that the disc caliper wouldn't fit.  What do you do when that happens? You cut 'em out and custom bend some new ones and make it work. And this is the result. 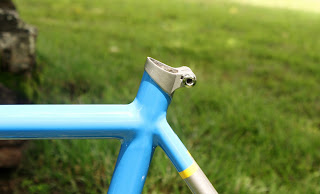 French Racing Blue in the sun. 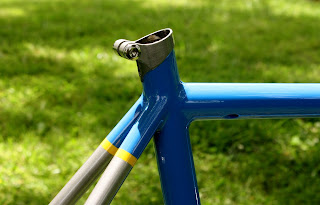 French Racing Blue in the shade. 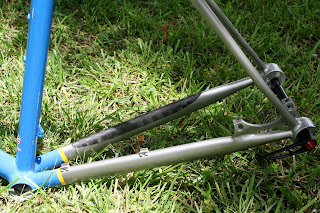 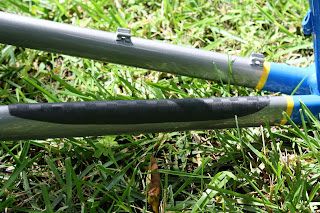 Handmade carbon chainstay protector just for your bike and no one else's. 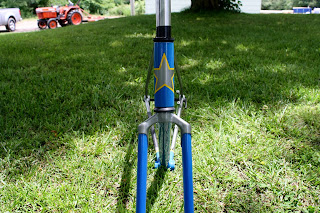 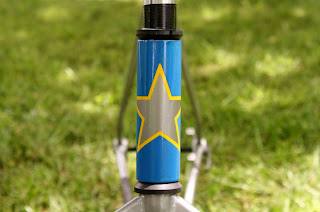 Like I said, the head badges are in the mail. 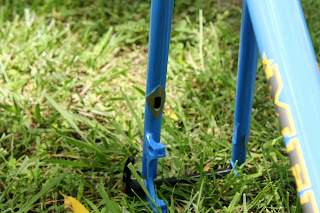 The brake housing runs throught the fork leg and this is our exit port. 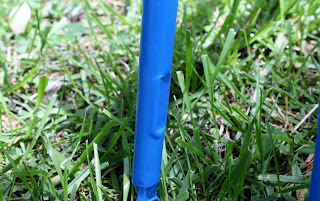 After building the first fork I found out that the larger diameter fork blades necessary for disc brakes didn't leave enough space for the rotor.  So here was my custom cutout. 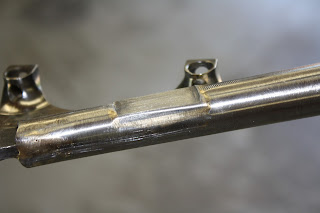 All of this work made one whole millimeter. Just try and find another fork like this in the world. 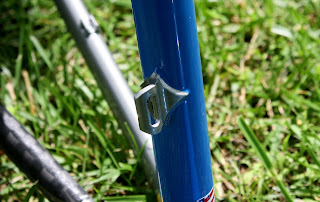 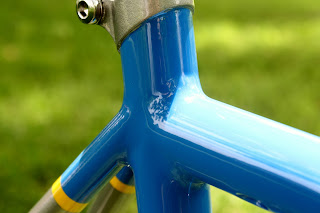 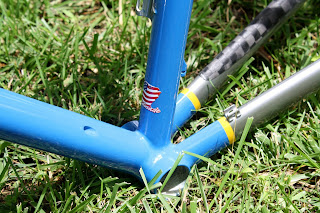 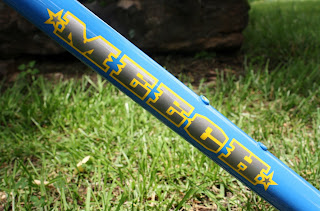 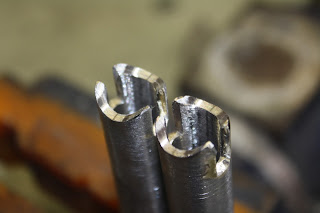 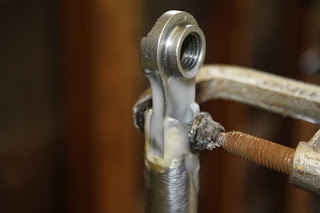 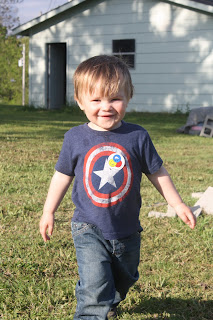 This little man right here is the reason I'm not getting to put in as much time in the shop as I need to. You think that's not a hard head? Oh well, he's worth it.  Man, just as soon as he gets old enough I'm gonna put his little hiney to work. I'm gonna make him file fillets with 400 grit sandpaper.

Thanks again for the patience Jubail.