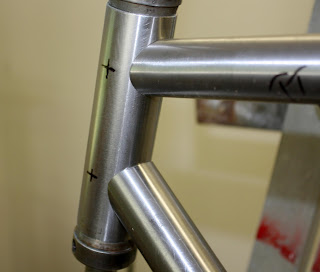 Got a few tubes cut and fit for Andy Derousseau's new cross frame.  All I need to do is fit the seat stays and then I can tack it.  This frame is the priority on tap and soon as its finished I'm gonna have to go into paint mode.  I'll be painting this frame as well as a couple 2-3 more in hopes that I have enough frames to show at the Texas Handmade Bike Show in October.  Its in Dallas this year and I believe the dates are the 27th and 28th but I'm fixin to go check that out to make sure.  I haven't been to Dallas in quite a while so it should be a good time.  Its not a bad drive from my hometown of Jonesboro, only about 7 hrs.  Well I used to be able to make it in 7 hrs because I used to haul ass everywhere I went, we'll see if I still got it.  I'm sure I still got it in me but the state troopers may try and take some of it out of me.  Back when I raced motocross I was walking a tightrope to keep my license because I had too many tickets.  I would slow down for a while until one or two went off my record and before I knew it I would be sitting on the side of the road getting another.  I once tried to bribe a cop. I asked him if he went to church, and he said yes, so I told him that if he wouldn't write me a ticket that I would donate the money to his church. About landed me in jail.  Talk about fast talking.  I talked faster than I could ever ride a bicycle or motorcycle. I never actually lost my license but it was pretty close there for a while.  Once I got a ticket and I paid for it with a check in the mail right before I left for Spain.  At the time I didn't know you couldn't send a check to pay.  So I left thinking everything was cool and my mom started getting notices about me missing court dates and payment of fines and blah, blah, blah and they had her all scared that I was in some trouble and had bailed.  All that hassle just because I was going a measely 90 mph. Pffff, thats nothing for me, I can downhill that fast.  Ok, I'm BS'n you all now.  I'm not a great descender at all.  If I don't know the descent I usually keep a finger on the brake, I don't like surprises at 50 mph these days.  I used to be banzai but these days I enjoy life and I want it to continue, don't need to exit the pave into the bush where theres no trail if you know what I mean.  Ditches, rocks, and trees have never appeared to be afraid of me, quite the contrary.  Oh geez, I just realized I'm such a pussy now. 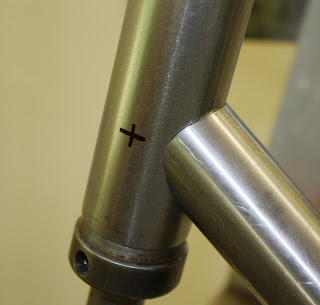 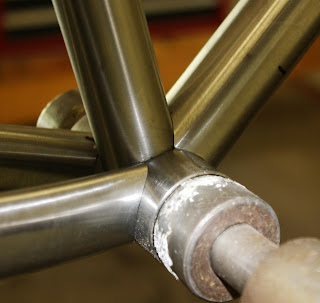 There is some serious heart and soul going on here, you feel it?  Its gonna translate into speed and you're gonna feel that, all sure.  I'm having visions of skyscrapers for some reason. 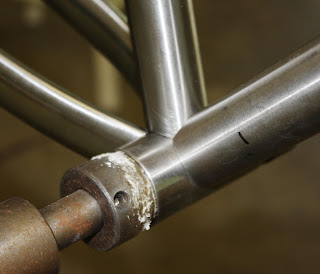 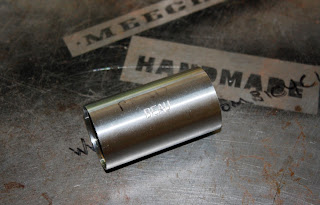 This is better than writing your name on your underwear.  I don't do that either.  What?  So now you think I wear a thong with my name on it?  You're wacked man! 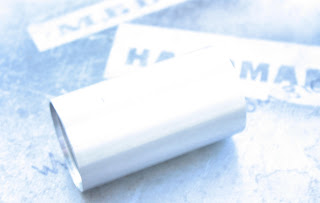 This is proof UFO's exist.  Look at that first bottom bracket picture above and now look at this one.  You gonna tell me that there wasn't a UFO with aliens right outside the window spying on the MEECH headquarters?  I'm just kidding.  Everybody knows theres no such thing as UFO's and aliens.  I don't want you all to think I'm crazy or something.  Well, I might be crazy but there is no such thing as aliens or flying saucers, I don't think.  Or maybe there is, hell I don't know, I'm just a framebuilder not an astronut.  "Maybe Jasper does the astro."  Recognize those lyrics? All this talk about thong underwear with names on it and spaceships with aliens and Jasper with astronauts, you see what's going on here don't you Virginia?  "Yeah D, its crystal clear."  I need to go ride. Aw man, I got to mow the yard today.  That sux. Chao.