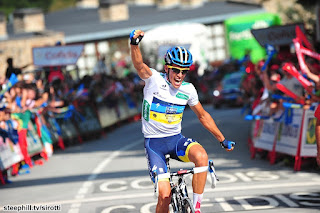 Alberto Contador would not stop attacking and today on Stage 17 he finally broke Joaquin Rodriguez.  In one of the best one on one battles I have ever seen, I thought that Rodriguez had taken everything Contador had and was gonna win La Vuelta but el Pistolero was just relentless and would take no quarter for a second place finish. Apparently he just went out on a suicide mission 50k from the finish and made it happen.  He said, "Its the only way I know to race, I don't race for second place."  I have to admit I thought maybe Alberto had lost a little bit of fire in his legs or more likely would be that he just wasn't up to full race speed but regardless he dished out more 'race' than most people have ever seen.  I seriously doubt anyone is gonna be able to stop him in next year's tour either.  I think he just wants it too bad.  I feel bad for Rodriguez because he rides like a champion and was very close at the Giro and then to lose this Vuelta, it has to be a major blow.  The race isn't over yet, anything can happen, but I think everyone just knows that they don't want it as bad as Alberto Contador.  Remember when Axl Rose came into the public eye?  I remember looking at all those tatooes and he had the one that said, "Victory or Death."  All I could do was just think about it.  Victory or Death is the way Contador has ridden this Vuelta.  I've thouroughly enjoyed watching it.  They made the entire tour of Spain for the excitement of the spectators and it paid off.  Viva Espana!
Posted by MEECH at 2:44 PM