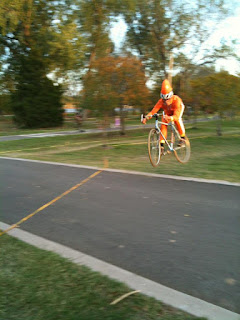 I've been getting a handful of pictures from people putting their MEECH to good use here lately.  This is Jess Parker, avid bike racer, rabid cyclocrosser, and also one of my old riding buddies from Jonesboro.  He was one of my first customers and when I told him to "Fly with MEECH" he took it to heart.  Here he is airing it out at a cyclo-X Halloween party last year. He's got some speed behind him in this little dig as well, see that blur. For this photo he gets a free MEECH cycling cap.  This is a beautiful photo.  I've seen a couple of photos out there of people jumping their cross bikes but I never thought I would get to see a MEECH completely aired out.  I love it!  Just for the records, I also love to see wheelies, one-handed especially, so if anyone feels like riding their MEECH on the back wheel (or front)  I've got another cap waiting.
Fly with MEECH!
Posted by MEECH at 5:56 AM