Fist Fight on a Bicycle 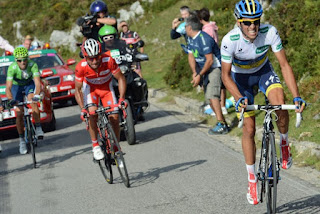 This is about as far away as Alberto Contador can get from Joaquin Rodriquez.  The Vuelta has housed one of the best 'mano a mano' slugfest on bicycles I have ever seen.  I can't remember ever seeing Contador attack this many times and never escape.  In stage 14 he had a pretty good gap and I thought he was on his way but Valverde and Rodriguez put in one hard effort and closed it up at the finish line.  There are still a couple more places to give it a dig before this race is over but Rodriguez looks like brick and mortar right now.  We'll see. 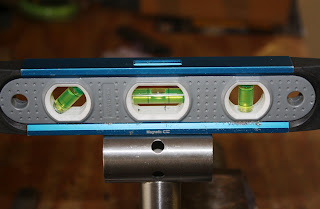 Just got started on a cross frame for Andy D. out of Fayetteville.  Nothing but prelim photos here because I'm waiting some head tube material and bb engraving.  Hopefully I'll be in full swing by the end of the week.  I've got a lot of work to do if I'm gonna make it to the Texas Handmade Show.  I was telling Larry Yancey last night I may have to borrow a couple of his MEECHs to take to the show if I don't get some stuff done.  He said, "No problem, if I don't crash'em all up before then." (He's had a little trouble keeping it on two wheels here recently but his luck is gonna change when the new MEECH cycling kits come in.)  And then I had a slight vision of showing up at the Texas show with one custom bike that was all mangled up from a cliff dive.  The fork and head tube would be raked out like an Easy Rider chopper, the top tube would look like a big 'V', and a pair of $2500 Zipp wheels would be shaped like a couple of Pringles.  I would probably have plenty of people at the booth checking my stuff out.  Ok, I've talked enough, I've got to get to work.  Thanks for checking things out and I'm gonna try to do better on my blogging.  I know I've been slacking lately, but that part-time job at the bistro has cramped my frame-building style a bit.  But thats ok because its giving me a little more financial freedom with my framebuilding budget.  And I would like to say thanks to those guys for letting me work with them.  They're good people and make some beautiful food.  I think I may ask them if I can bring my frame jig and torch down there and set up in the back somewhere.  I would have my food and work all right there together.  Hmmm, if I could just find a place to put a cot then I'd really be set up.  I wouldn't even need a car then. Wonder how Anne would feel about that?  "Go to work Dimitri!"  Ok, I'm gone.  Chao amigos. 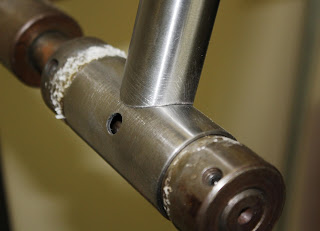