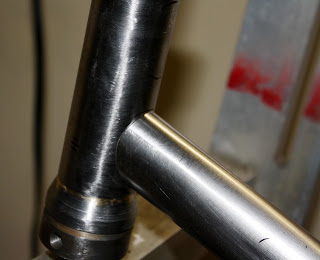 Got a little work done on Matt's Sting this weekend and thought I'd update the blog a little.  From the pictures this probably just looks like any other build but its a bit unique for me as this is the first time I've ever had anything to do with a BMX frame.  I never owned a BMXer and have never been on one of the tracks, but as a kid I did try to ride my Schwinn Scrambler like a motocross bike, that was as close as I got for a long time.  Building this frame is not much different than building other frames except that I'm just unaccustomed to the geometry and when I step back and look at this thing in the jig, I'm like, "Is that right?"  But its coming together pretty well and I think I'm on par with everything.  Its hard to tell in the pictures but the down tube and top tube are ovalized a bit just like old Stings.  This is something that Matt wanted to incorporate into this frame. 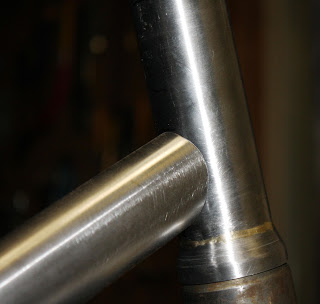 This is the "other side."  Other Side is one of my favorite Chili Peppers songs along with Scar Tissue.  Now that sounds like a BMX song. 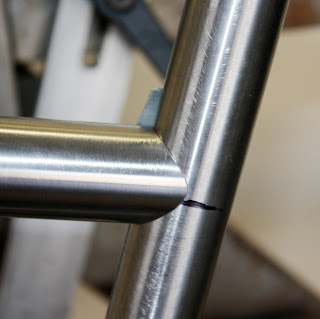 In order to get a photo of the top tube mounted I actually had to use some small pieces of duct tape to hold it in place as my Bringheli was not designed with BMX frames in mind.  Its worked pretty well so far with some minor upgrades. 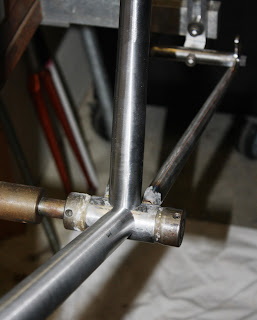 The seat tube is ovalized at the bb shell as well.  Still a little hard to tell but if you look close you can see it. 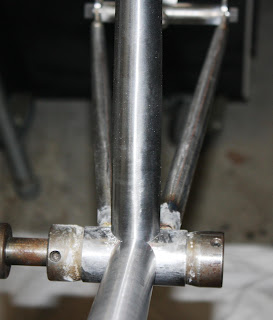 I think its even harder to tell here but don't worry its oval.  Maybe I should have taken a photo from the side.  Think Dimitri, think. 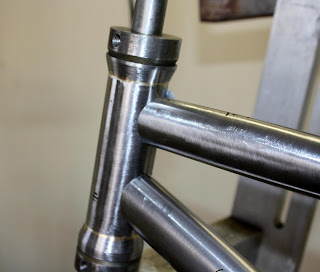 I love using integrated head tubes, I just like the way they look.  Look at it like this, if you are sitting at the drive-thru window and you're placing your order and the girl says, "Would you like to have that integrated?", you'd say, "But of course."  I'm probably gonna raise that head tube a bit before tacking it and take up some of that space.  I guess I didn't tape it in the right place. 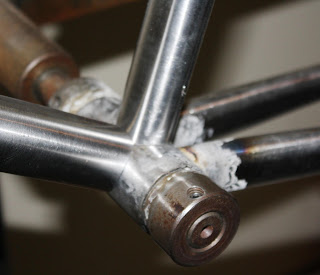 BB shot.  I can tell its oval but that may be just because I know it already. 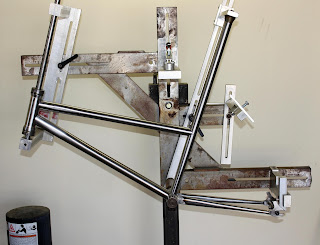 All I need to do are the seat stays and then I should be able to have this thing together.  Oh yeah, and the fork also.  I'm waiting on a couple of machined parts for that.  I talked to Bob the other day and they should be finished shortly.  Can't wait. 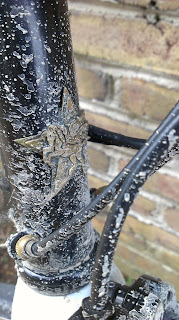 These are just a couple of random photos that one of my hard racing customers sent me yesterday.  You may remember this frame that I built for Jonathan Ruiz this past summer.  Anyway he's been wearing it out on all sorts of terrain and has't avoided any dirt roads as far as I can tell.  I may need to try and get him on one of my cross frames.  I love seeing photos like these because I know that the bike is being ridden in everything and that really excites me.  Do me a favor and never baby your MEECH.  Maybe take the seat post and bottom bracket out every now and again and spray the inside with some WD-40 and let it air out.  Other than that you should be good for a long time. 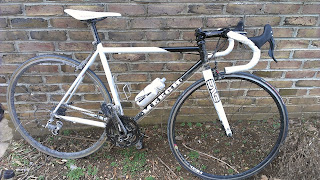 This is a good looking bike.  One of the handful that I've painted myself.  There will be more. Thanks for the photos Jonathan and thanks to everyone for stopping by and checking things out.  Now stop reading this and go ride.  Chao.