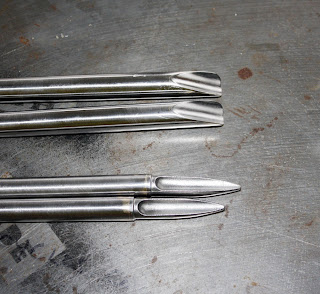 I just finished making this second pair of stays which is more along the lines of the traditional Sting.  They truly are hand made as the stays on the bottom are just seat stay caps that are brazed in, however I do like the way they look as they lay tighter against the frame and don't stick out as far.    Good news is, they are both dangerous.  The ones on the bottom have a sharp tip whereas the top pair are a bit edgy around the sides. Its all just personal preference from here.  The homemade stays are way lighter though and lighter translates into speed.  These new stays should be in place shortly and then its on to the fork.  I'm gonna save the "silver arrows" for my own personal BMX frame that I'm gonna build and jump it over a bus.  Ok, maybe a Hot Wheels bus.  Once I was thinking of doing a publicity stunt for MEECH Bicycles.  On many of my road rides I ride across the Lake Norfork bridge and I'm always thinking, " Man, I would so like to jump my bike off that bridge."  Of course I would be landing in water right?  Well, depending on the lake level the drop could be anywhere from 40-80 feet.  Thats a long way down, and since I haven't jumped a bicycle in like 20 years or so I imagine I wouldn't exactly execute the perfect form and hitting the water on your back or side from like 50-60 feet up could hurt, it could hurt bad.  So anyway, like always I've given in to common sense and pussed out again on my comeback. Man, I miss the old Meech who would just do things and think about it later at the doctor's office.  Guess I'll just keep making frames and let you guys do all the stunts.

Some of these ads that they're putting up on my blog are annoying me.  Most are ok, like the bike or motorcycle ads, but there is one that they've been running lately that says, "Putting on your pretties", and its a bunch of pink girls clothes.  All sure I'm not liking that but luckily right next to it there is a Can-Am ad that helps keep the machismo in the room. Later.