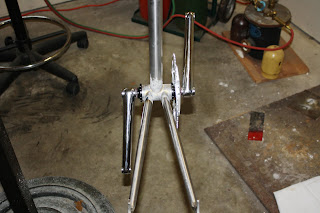 Wanted to do a quick check to make sure I have plenty of chainring clearance before I stuck the seat stays on.  I didn't anticipate a problem but am unfamiliar with BMX cranksets.  I've been putting Campy Ultra Torque cranksets on and off for so long that I needed a crash course in order to get these dialed in.  They're super-easy and the Profile website even has a quick video showing you the installation but I couldn't figure out how to get them off.  They include a tool for putting them on and I thought the same tool was somehow used to extract the crank arm like an ordinary crank pulling tool but after trying to use that tool in every imaginable way I could think of I layed it down and called Profile. After talking to Termite (theres a name you don't hear everyday, I'm guessing with a name like that he is a pretty hardcore BMXer) it turns out you just screw the bolt into one side of the crank spindle and tap it out with a hammer, but it takes more than a tap, lets just say an aggressive tap.  Who woulda thunk it?  A hammer.  I normally just use those to throw through the window when I get pissed off.  Just kidding.  Sometimes I think it would feel nice to just let a hammer fly out of my shop window but windows are kind of expensive and its too cold out there as it is.  My shop this morning was a balmy 30 something degrees.  Work a little, go in and stand by the fire a little. 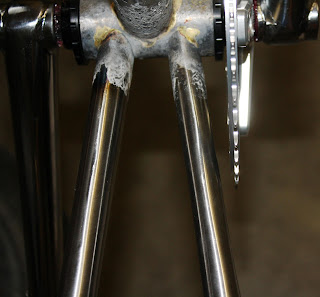 Plenty of chainring clearance and the tire clearance is about as tight as this also but BMXers don't worry about mud issues like cyclocrossers.  The courses are usually dry, hardpack, and probably nicely groomed, which is the same way I prefer my cyclocross courses and motocross courses as well.  Its sounds weird but i prefer cloudy and rainy days on the road bike.

I know this is a pretty boring post but i just needed something new as its been a few days. But look at it this way, by posting a picture of every little step I take out in the shop its almost just like you're in the shop building this frame with me, and if you're here with me then I can blame that broken window on you.  One time when I was a kid in school i pretended to be sick so that I wouldn't have to go that day.  There was snow on the ground and I didn't think we should have to go and I was pretty disappointed to find that they didn't cancel.  Anyway, so I faked being sick and I'm sure my dad knew, as he always knew everything, but somehow I managed to get the house all to myself.  After a couple of hours of TV boredom starts to set in and I noticed a lot of birds outside on the snow so I went to my closet and grabbed my trusty Crossman 760 pellet gun and very slowly opened the window, picked out the biggest bird I could find, and yes I did it, I shot that bird.  Only thing was it didn't kill it, it was just running all over the yard leaving a big bloody trail all over the snow.  I was like, "Oh crap, i gotta do something fast before my mom gets home."  So I grabbed my house robe and house shoes and am outside chasing this bleeding bird around in the snow with my pellet gun when my dad pulls up in the driveway.  Turns out he decided to check in on me to make sure I wasn't dying since I did such a good of job acting like I was so severly sick.  So there I am standing in the snowy backyard  in my house shoes with my robe half open and pumping up my Crossman to try and finish this bird off.  Talk about being caught red-handed. Where do you even start to explain a situation like this one.  "Well dad, I was laying in bed and feeling really, really sick and this bird kept pecking on the side of the house.  I was afraid he was gonna peck a big hole in it so I figured I would just shoot real close to him and scare him real bad so he would quit destroying the house that you and mom work so hard for.  Well dad, the pellet must've ricocheted and hit the bird and I was just trying to put it out of its misery.  The bird wasn't even a woodpecker, probably like a robin or something and it managed to escape while I was explaining what happened to my dad. All the other birds were probably up in a tree going, "Man, can you believe the story that little punk is telling?"  Well, the next day I really was sick, I guess from running around in the snow half naked and bare footed, but do you think I even dared ask to stay home?

Hopefully tomorrow I can make some real progress. Its supposed to be about 10 degrees warmer and that'll help out a bit.   So now if you'll excuse me I have to go walk my dog out in the snow and look for that hammer.  No ride today, cross my fingers for tomorrow.  Chao amigos.