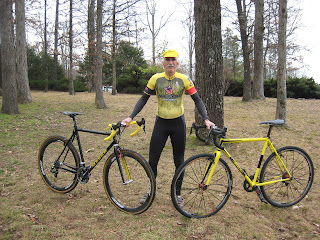 Here is a quick shot of Yancey with both of his bikes prepped and ready for the 2013 Master's World Cyclocross Championships.  This will be the second year in a row for him to be hanging it out in Louisville mud.  If the weather forecast goes as planned its gonna be a cold, muddy race but he's gonna be going too fast to see or feel any of it.  This year he has two bikes to attack with along with a new MEECH team kit.  The boys in the factory are pretty stoked about this gig.  We're well represented again, even moreso than last year.  I hate it that I can't be there because this is a once in a lifetime thing but I'm wishing him all the best in this race.  I know for a fact that he's been training for this race every since last year's race ended and I can assure you that Larry doesn't take his training lightly.  It hurts me just thinking about trying to keep up with him.   I've had alot of good moments in my life and to see this photo with Larry on two bikes that I built going to a race as big as the World Cross Championships ranks right up there with the best of them. Yellow and black never looked so good.  Go get 'em Yancey and have fun doing it.  Thanks partner. 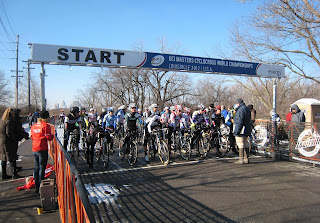 I decided to include a couple of pictures from last year's World Championship to get him all fired up. 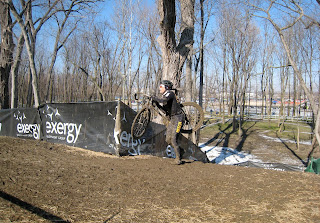 He has trained a lot harder this year so when you running this year he'll probably be smiling and laughing during sections like this.  Out of all the racers that I've met, Larry is the racing'est hombre I've ever known.  He truly loves it.  Rock 'n' Ride!

Be cool,
Be fast,
and
Stand on the gas!

Famous words written and lived by none other than Larry Yancey.