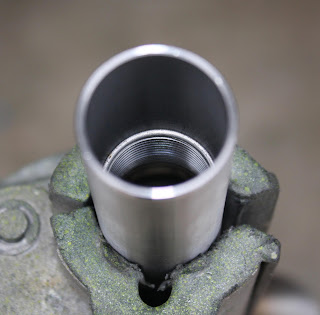 First of all, I would like to say that I know I've been lagging a bit in posting on my blog.  I'm not happy about it as I really do enjoy posting new things and getting to talk about them.  Blogging is therapeutic for me.  You get to talk about how things are going, what you're working on, and hopefully you have an audience that is listening to you and is able to share in the moment, they can even comment if they like.  I don't get a ton of comments on this blog but there are a few.  I imagine most people are just checking out the photos and seeing whats new and I can relate.  Thats the main reason i started the blog.  I just wanted to show off the bike frames I was making and hope that someone noticed.  I never expected any comments but they're always welcome if you got something on your mind.  I love to talk bicycles or just whatever.  Anyway, this BMX frameset that I've been working on is most definitely the slowest that I've ever built a frame.  I've probably already given enough excuses so I'm just gonna spare you all that as I know you guys are probably taking care of alot of the same stuff.  MEECH Custom Bicycles is always leaning more toward quality over quantity so time is really no issue.  I have read here lately in a couple of books by people who basically say there is no such thing as time, that its all been created by us, is a figment of our imagination, and that it has no relevance on our life at all, but who has time to waste talking about that crap.  Try that one on your boss in the morning after you stroll in an hour late.  "But boss, time isn't real, its created in our minds."  I imagine his response will be.  "Oh yeah, well so is money."    I am slowly making progress with this build and it will be finished before too long.  "When?"  Mind your own business Virginia.  It'll get done when it gets done and its gonna be one sweet ride.  "What is this even a picture of?  It doesn't look like much to me."  Sweetheart, thats because you know nothing.  This is a picture of the inside of a steerer tube manufactured by Standard Bykes.  The threaded sleeve is machined into the steerer according to Jess who works for Standard.  That would mean its made of steel, however my good friend Bob Davis says that it appears to be an aluminum sleeve that has been glued into place, truthfully I'm not sure as its really hard to see down in there good enough to tell.  So don't get me to lying about how its made when all I know is its a very nicely made fork.  The crown race is actually machined onto the steerer tube so maybe this is as well.  One thing I know for sure is how mine was made and if you'll follow me down to the next photo we'll check it out. 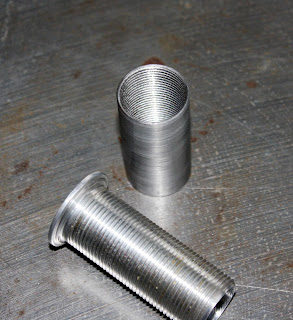 This is the sleeve that Bob made me and this is your average BMX lock-down cap.  The sleeve is cut out of steel and I'm gonna slide it down into the steerer and then silver braze it in place. It would have been much easier to cut this sleeve out of aluminum and then glue it in place however i was worried about it possibly coming loose over time and I didn't want that on my conscience.  Is that how you spell "conscience?"  Who knows.  The stem lock-down cap is readily available from most any bike shop in a variety of colors.  Follow. 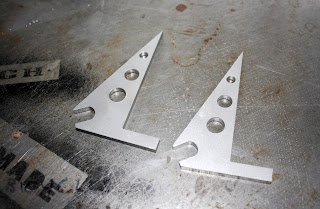 Now these are new.  These are some custom dropouts Bob made me for the fork.  He does really nice work and I'd be up a creek without a paddle if it wasn't for him.  If only you could see his shop.  He doesn't use any CNC machinery.  Its all older equipment and I think he has some things in there that are over 100 years old.  The other day he was rebuilding a motor that was a few years over a century old.  This guy is a trip and can do anything.  BMW motorcycle riders call him up from all over the world wanting him to make parts for their old bikes that they can no longer get parts for.  Once again, an incredible guy and I'm lucky to know him much less have him 10 minutes away.  Thanks Bob and I hope Virginia gets well soon.  Bob's wife's name really is Virginia, but she's not the Virginia that I'm always referring to.  Bob's Virginia is super-sweet, my Virginia, well, theres still time for her to come around. 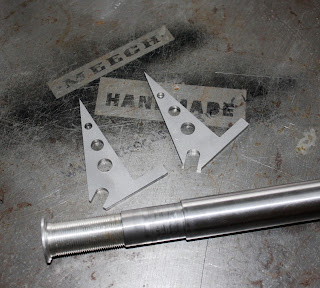 Anyway, thats all I have for you today.  I actually took the top tube and down tube and ovalized them a little more than in the previous post and the ovalization is much more visible.  I have to go sling some hash tomorrow but come Tuesday morning I'll be out in the shop trying to get this thing closer to done so hopefully I'll have some new stuff to show you. I really do want to finish it up so that we all can see it.  I hope I haven't forgotten how to fillet braze.  Not a chance.  I'm really enjoying this build and have been learning quite a bit from it.  I'm hoping that all this time that I've been spending on other work outside of frame building will translate into more frame building for me down the road.  I have just had to slow the frame building down a little in order to take care of some other business and I'm hoping that eventually I'll get everything streamlined a little more and that will allow me to get back into the shop and get back to some more frame building.  I've actually had to turn some orders away because I haven't been able to get everything done as efficiently as i like, and I really didn't like doing that but if I can't get things done for people in a timely manner then I'm just gonna do a little at a time until I can. The days are gradually getting longer and thats gonna help out a lot, mentally and physically.  Thanks for bearing with me and don't hesitate to give me a shout. I'm always ready to build a frame just a soon as a get these next few done.  See you in a couple of days.