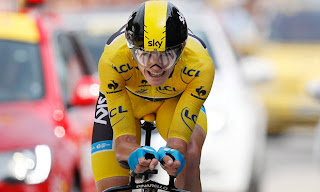 Today Chris Froome won the stage 17 time trial by 8 or 9 seconds over Alberto Contador.  Even though everything makes this tour appear to be over, and I thought it was probably over quite a while back, I'm not so sure it is.  I do believe that Froome is without a doubt the strongest rider in this tour but if fatigue happens to set in on one of these mountain stages coming up he could be in trouble.  Contador is obviously getting stronger and even though he himself has admitted that Froome is the strongest he won't quit trying to win. He cracked Joaquim Rodriguez on the second to last day in la Vuelta.  All I'm saying is that with the Alp d'Huez double-climb coming up it could be a really bad day for Chris Froome should he have one of those moments.  Meanwhile, one of my favorite riders, Roman Kreuziger, has ridden himself up into third place by just working for Contador.  Not a bad place to be for someone hired to work for the man.  I hope he can hold his place all the way to Paris.

In regards to Alberto Contador, whether you love him or hate him he makes the grand tours much more exciting.  He goes for it all the way to the end and Froome has got to be begging for this tour to end.  Its just now getting good.  Just for the record I think Froome is riding clean even though he does make it look like he's not.  Win or lose I wish him well.

Here is a little quote by Bjarne Riss about the dangerous descent coming up.  I admit I hate wet descents but I love this comment.


“Listen, riders have been going down dangerous descents one thousand times before. They must hit the brakes and be careful,” Saxo boss Bjarne Riis told reporters. “This is a bike race; it’s not some Sunday morning grandma trip. They have to learn how to race their bikes and stop complaining.”