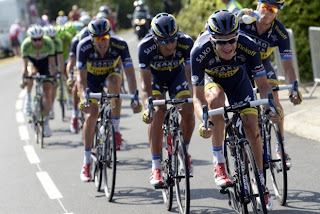 Just eight hours ago I was babbling about how the Tour de France is boring and that it pretty much looks to be over and then i come home from work to find out that on one of the flattest and most boring looking stages of this year's tour, Alberto Contador and the Saxo boys put the hammer down in a crosswind and took over a minute out of Froome.  Valverde, who was in second and having his best Tour de France ever was caught out on a wheel change and lost something like 7-8 minutes.  Bad day for Movie Star?  I would say yes.  Now Saxo have Contador and Kreuziger in the top 5, and Team Belkin also have 2 riders in the top 5, Bauke Mollema in 2nd and Laurens Ten Dam is in 5th I believe.  Ten Dam is such a cool name.  Thats almost as good as Moto Jam.  Can they beat Froome?  I still kind of doubt it, however things are looking up for Contador and company.  They have cards to play. I'm just happy that some excitement was injected into the race.  I didn't want to spend the next week watching to see who's fighting for second and third. 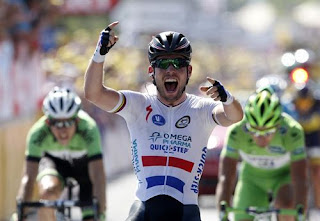 Mark Cavendish got a little self redemption after getting pee'd on (builds character) as he was in the winning break and easily outsprinted Peter Sagan and the rest of the guys for the stage win. Feel better Mark?

I would imagine that after a long shower and a Stage win in the Tour de France he'll be back on track, not to mention pissed off.  Get it?  Pissed off, after getting pissed on.  I crack myself up sometimes, I'm not funny though.  My grandmother once told me that.  She said, "Boy, you ain't funny."  On another occasion she told me I wasn't special.  She said, " Boy, you ain't special."

Just wanted to add that these photos are courtesy of Velonews.com
What a great online magazine. ;)

Well, now I can't wait for the fireworks to start this weekend.  I think Ventoux is on Sunday so we'll get an idea of who has the momentum going into the final week.  Thanks for stopping by.  Good riding!