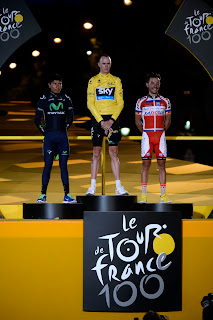 Congratulations are in order for Chris Froome, the winner of the 100th edition of the Tour de France.  He pretty much dominated the race from beginning to end with no more than a couple of scratches on his armour.  Even though I like Alberto Contador more as a rider and I was rooting for him, I was happy for Chris Froome and to also see all fresh faces on the podium.  I got tired of everyone hounding Froome about doping, I still think he's clean, he was just a little stronger (ok, alot stronger) than everyone else.  He seems pretty genuine and said that his yellow jersey will stand the test of time.  It would be cool if everything in cycling got kinda cleaned up.  I enjoyed watching Nairo Quintana collect a couple of jerseys, white and polka-dot.  Its probably not often that a country like Columbia has a real hero like him.  Man he's a little dude.  Wonder what size frame he rides?  He could drop most people riding up a mountain with a beer in one hand and a cigarette in the other.  Joaquin Rodriquez looked like a no-show at this year's tour but came up from the depths in the last week to get the final podium spot. He seems like a pretty good dude however I don't think his kids belong on the Tour podium, I think it should just be for the racers.  I'd like to see him win a 3-week tour, it may be this year's Vuelta. 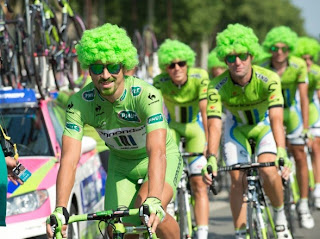 Ok, I must admit that I screwed up in one of my earlier posts when I said something to the nature that the Tour de France was the most boring of the 3 tours.  I think I was a bit disappointed that the race seemed to be over so quick.  Chris Froome made it look easy however the Tour is not a boring event.  Someone who was actually in the race would probably smack me across the lips if they heard me say that.  Its easy to call it boring when you're sitting on the couch with quac and chips screaming, "ATTACK, ATTACK!"  But the truth of the matter is, its the biggest bike race in the world and this year's race was a really special one.  The racing wasn't that bad (no different than any other year really according to Peter Sagan).  It was better than last year when Bradley Wiggins basically just bought a train ticket to Paris and said, "... and give me the long, scenic route you cunt."  For what its worth, I like Wiggo.  On occasion he wears that British punk rock hairdo and he has that "F the media" attitude, which I really like.  What really surprised me this year was the ending ceremonies.  I normally don't pay much attention to stuff like that but they outdid themselves for this edition.  The light show was exceptional.  I thought it was super-cool and I while I've never been that interested in Paris I couldn't help but to think that I wanted to be there, and maybe one day I'll go.  I avoid hectic, overcrowded events at all costs however it would be a great moment if I could make it over there. 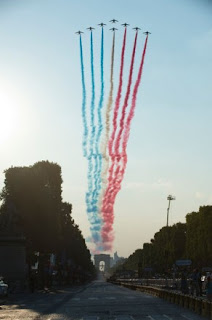 How many races have you been to where they break out the Air Force.  This is basically the only time that France uses their military jets.  Its the biggest bicycle race in the world, 21 days of racing across an entire country, and the racers go through more than they ever have in their entire careers.  To say its boring was a big mistake on my part.  I've had to eat so much crow that I've actually got a pretty good recipe for it now.  The first thing you do is don't remove the feathers.  That makes it really hard to swallow and it makes you look stupid for a longer period of time with all those black feathers poking out of your mouth.  Anyway, I'm always a little sad when the Tour de France ends, mainly because I'm out of quacamole and cherry limeaid, but also because I know that the next day when I wake up there is no race to watch.   While I was watching the podium ceremonies I was trying to imagine what it would be like, not just to be there watching (which would be great), but to also be standing on a podium in front of the world because you just won or placed in the biggest bike race in the world.  You can't imagine something like but its fun to try.  And after you do, then think about how you'd feel if you had won the race and everybody just kept trying to tear you down with accusations.  Nobody deserves that.  So congrats to Chris Froome!  I hope he's clean.

Just wanted to say that I got these photos from www.velonews.com.  They probably get tired of people like me stealing their pictures but i have no other way of getting good photos from pro races so I hope they don't mind too much.  I read velonews on a daily basis because its good stuff.

Wait!  I do have one of my own photos from this year's tour, its not mine but its one taken by Steve Jauch, who took his MEECH over to France and spent a few days climbing.  Let me get it. 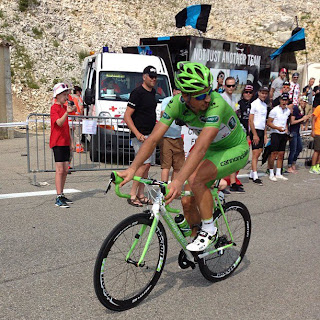 Here you go.  A true photo of Peter Sagan taken by a true fan of cycling and the Tour de France, none other than Steve Jauch.  Steve was my inside connection to this year's Tour and for letting me use this photo I'm gonna send him a MEECH jersey.  This is a great photo and Velonews couldn't have done it any better. Thanks Steve!  You might get a job offer out of this.