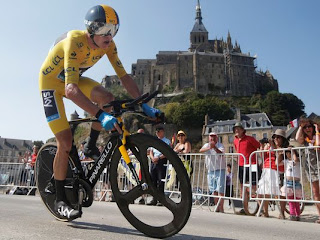 Chris Froome has pretty much dominated the Tour thus far and he's making it look like its over.  He definitely looks much stronger than the rest and its hard to imagine anyone can overtake him without him having a bad day.  There are some hard days to come so I'm sure we're gonna see some attacks so I'm hopeful that the race will come around because so far its been as boring as last year.  I'm starting to realize that the Tour de France, being the biggest bike race/tour in the world is also the most boring of the three tours, although the year that Cadel won it was interesting right up until the finish.  Lots of times it seems like the Tour is over by the tenth stage.  So far the most interesting day was Stage 1 when the bus got stuck under the finish line.  How sad is that?  Mark Cavendish seems to be quite popular this year. Everybody seems to think he took Veelers out but I didn't see it like that.  I thought Veelers drifted into Cav's line and that Cavendish didn't have a choice but to stiffen up and lean back into him.  I'm sure it will be debated forever.  Could "the Manxster" have gone a little easier on Veelers, probably, but when you're going all out at 40+ mph and someone impedes your progression...well, who cares, they're sprinters, let them fight it out amongst themselves. If you pay close attention you will see that Veelers is taking a look backwards about 1 second before the incident takes place.  Only saying that what kind of a pro decides to look back  when you're going over 40 mph and you're in the front five riders.  Sounds like a Cat 4 move to me.  Actually most of the Cat 4 riders I've ridden with were smarter than to look backwards in a sprint finish, but its all open to interpretation.   Enjoy. http://www.youtube.com/watch?v=LlBWnTPwmgI

The "missle" got pee'd on during his time trial and that is just wrong.  Nothing like suffering at your max and having some corn nut throw urine on you.  That clown deserves a beating in my book.  Since Cavendish didn't need to worry about his time trial time he should've just stopped and went back and wrecked the guy's face.  Umm, maybe not.  Have you seen Mark Cavendish?  He's only about the size of a Mounds bar, that being one Mounds bar, there are two in the package.  I love it when Cav wins a stage and stands on the top step of the podium and the trophy girls are still taller than he is and they're standing on the floor.  Anyway, I like Cavendish.  I like him because of an interview I read about him once.  Apparently he unplugs everything in his house when he leaves because he's scared of a fire burning it down.  I don't go that far but I can relate.  I really liked his response to the interviewer when he was asked about this.  He replied,

"...what looks more stupid, unplugging everything in my house or coming home to a burned down house?" 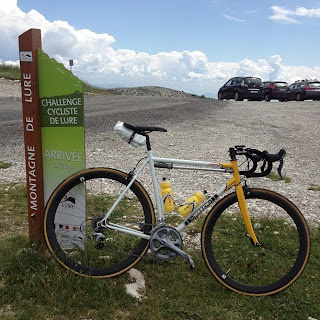 Now this is what I'm talking about.  Instead of just making boring conversation about some tour in France how about going over there and doing one yourself.  Thats what Steve Jauch has done the last couple of years. Between last year's trip and this year's trip it looks like Steve has climbed about half the mountains in France.  This is too cool.  Love it!  Thanks for riding a MEECH! 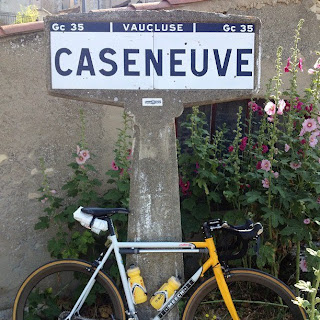 This MEECH deserves a rest once in a while. 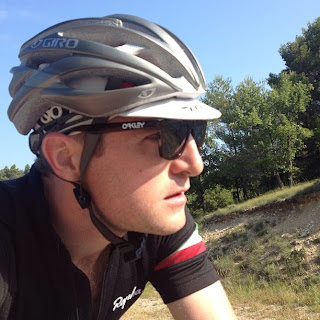 This is the pilot, Steve Jauch.

Thanks for stopping by.  Have a good weekend.
Posted by MEECH at 6:05 AM