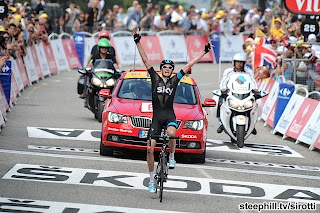 The Tour finished up it's ninth stage yesterday and these photos pretty much tell the story.  Chris Froome dominated stage 8, which was the first mountain stage of this year's race.  He had a lot of people saying that the tour was over and it kind of looked like it however with all the experienced racer's this year there is no way they'll give it in to him that easy. Sure enough, just as soon as stage 9 started the peloton started firing bullets and busted Team Sky all up.  I don't think they really hurt Froome however they let him know there is lots of racing to come.  Nobody expected to see Contador struggle like he did, especially when the climbs suited him, but maybe it was just a bad day.  My man Kreuziger had to tow him to the finish.  Kreuziger is one of those guys that rides really well when there is no pressure on him. Valverde looks better than I expected.  He's definitely a great rider but he hasn't really been that impressive at the Tour over the past years.  Lots of racers only race good in their own country and I think that its pretty common with the Spanish.  However it never bothered Indurain and it doesn't seem to bother Contador too much either, but who wouldn't rather be in their own country, especially if its Spain.  Most people in the world would rather be in Spain.  Valverde has won stages of the Tour but he always seemed to falter sooner or later in the mountains and he's never that good in the time trial. I've often wondered why because I would think he'd be strong in it.  He appears to have a good team and if he can tap into the Valverde of last year's Vuelta then he could be dangerous.  I would imagine that he and Contador will collaborate to break Froome.  I'm gonna shut up now because I feel like this post isn't telling you anything more than you already know.  I probably should have just posted something more along these lines:

Froome looked unbeatable.  Contador looked terrible. Valverde has a team and a plan.  Andy Schleck will try to get a stage win. There is still lots of racing to go.  There, thats better. 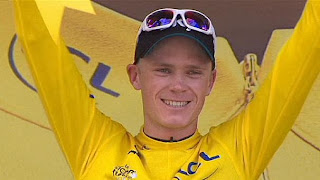 I hope Contador finds his legs to make it a more interesting race, or Valverde, or even and outsider.  That would really make it fun.  Chris Froome seems to be a likeable enough guy so if he wins I'll be happy for him but I know Contador is brewing inside.  Froome has been riding at 100% all year long.  Is it possible that he could get a little tired going into the last week of this race?  Hmmm.

I'm gonna try to get myself a road bike built up in the next couple of weeks.  Its my old S3 frame and I'm giving it a makeover.  Also Anthony Moat's frame is getting close to being finished as well. I'm just waiting on some seat lugs to get here and then it'll be ready to paint. I have a bear picture.  "What?" Yeah, just as soon as I can figure out this friggin scanner.  I'm miserable with computers.  Sometimes I can't even believe I have a blog.  Thanks for stopping by. 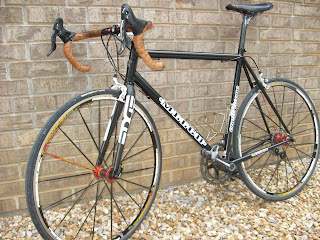