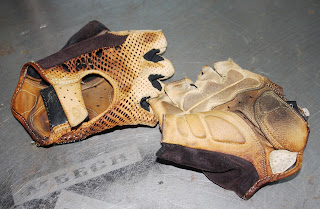 I'm gonna do a product review.  "What?"  Yep, why not.  The reason is the other day I went into the laundry room where I keep all my riding stuff and when I went to pick up my gloves I just sort of stared at them for a while.  There wasn't anything different about them from any other day, but they looked so bad on this day that they just sort hypnotized me for a bit. They were sitting there a wadded up mess with a crusty, dryed-cement look to them and they wreaked so bad I didn't want to put them on any more.  I was disappointed.  Why?  Because I don't buy alot of riding apparel these days and when I do I use it for a long time before getting new stuff, unless it tears up.  I normally try to buy good stuff for this reason. I've got winter riding jackets that are 10+ years old, my helmet is the last helmet I bought back when I was still racing the first go-round (13 years ago), and I normally wear my shoes a minimum of 5 years.  I've been wearing my current DMTs probably closer to seven.  I hate breaking in new shoes, especially since the DMTs took about 6 months to get broken in real good. They were made using some unusual material, almost like plastic. They feel good now, like they're molded to my foot, but the sole is coming off at the heel and so it was time to toss them.  Back to the gloves.

I started looking at gloves and these Giro LX gloves stood out at me because I've always been a fan of that natural color, I use to run that Cinelli natural bar tape all the time because I was a fan of the way it looks.  Anyway, these gloves looked really cool but they were pretty expensive, like 60 bucks, kind of high for gloves but they looked so good and since they were Giro I figured that they were  some of the best as normally Giro makes good stuff.  Actually I had never owned anything Giro except helmets because that was all they made before breaking into other stuff a few years ago. I read about them a little bit and figured I would be wearing these 'so cool' gloves for years to come since they were made of top-grain leather and so I bit the bullet and paid the price, unfortunately I actually did pay the price.  I remember the first time I wore them (no photo), they were beautiful and soft and the padding felt so good, my hands thought they were in glove heaven.  I felt like I had discovered something big, like a new band or something.  An hour later the sweat starting changing the color of them to this milk chocolate brown and it was slowly spreading around the gloves like lava across the landscape.  "Should've bought black I said to myself."  They didn't look cool anymore but I figured they would dry back to their original color and everything would be ok, this was some high-tech leather right?  No it wasn't, and they didn't.  From day 2 on they were
2-tone/3-tone brown gloves, but I continued to wear them because they still felt good and looked pretty solid.  That didn't last long either.  The dryed sweat from day-in day-out riding starting breaking down the leather and it started stretching and tearing.  Turns out that this was no special leather like I had imagined and I realized that a cow's arse is just a cow's arse and they haven't evolved much over the years, not to mention that the sweaty stinch just gets embedded into the leather and you can't get it out. It kinda smells like...well, a cow's arse. I tried washing it out to no avail, its there for good.  To be fair to Giro, I didn't give these gloves any special treatment.  No special cleaning care or oiling was given to them.  Who has time to waste on glove care, I only lube my chain once a week, if that.  So anyway, these are fixing to go in the garbage.  I've had them almost a year but I didn't wear them during the winter so I will be generous and say they lasted 6 months.  Thats nothing to me.  Sorry Giro, these gloves stink, really stink, and I would not recommend them to anyone.  They are worth $60 bucks for about one ride. 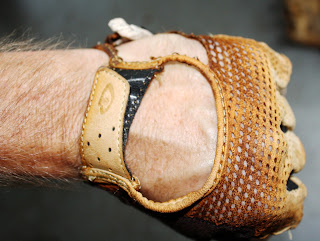 You can see how they just tore away from my hand.  Once again, I did not give these gloves special treatment.  Maybe I should have read the instructions or something but I just took them out of the package and went riding because thats the way I've always done it with other gloves.

"Man, you got some hairy arms brother."  You don't even want to see the rest of me.  I like the hair pattern that I have on the front of my body, its consistent and uniform, but the problem is that I have that same exact pattern on the back of my body.  I hate shaving.  The last time I did the state trial I actually shaved my arm hair.  It didn't help any. 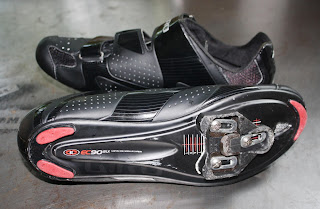 "You had the nerve to go buy some Giro shoes after that glove experience?"  I've got lots of nerve, truth is I bought these shoes back in late winter before the gloves had completely fallen apart but I would have probably tried them out anyway as I read about them quite a bit and I felt comfortable giving it a shot.  Notice I bought black this time.

I think the shoes are gonna be ok.  I'm gonna make this review short as I've only worn them for one day and I'm missing the final mountain day of the Tour.  They feel really good, kinda like they are already broken in, or at the least, it won't take long to get them broken in.  They come with different insoles so you can dial them in to your foot type and you also get a little bag to put them in if you're one of those people that carries your shoes around in a bag.
The Easton carbon soles are a nice touch also.  Only problem I've had is that it feels like I can't get the cleat far enough forward.  It sort of feels like the cleat is behind the ball of my foot but I tend to ride more toward my toes so I should get used to it with some time.  "Dance on those pedals boy!"  I'll let you know if they start falling apart but I feel like these are gonna be ok.  Let's hope.  Oh, yeah, almost forgot, they're light.  So freaking light that I had to put weights in the toe of them just to hold them down on the table for the photo. Alright, I'm outta here to go watch the end of the Tour.  Its all for second place now but hopefully it will be a good race.  Chao amigos.