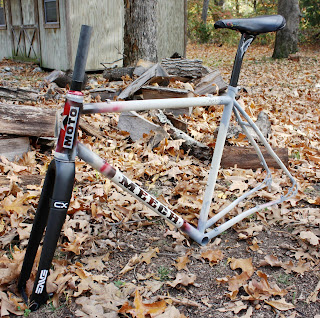 Anyone remember me working on a tapered-head tube disc-brake cross frame many moons ago.  Well it's just been hangin in the shop with primer on it waiting on an opportunity to be painted.  Well, it was supposed to be painted for this up and coming show however it didn't get done.  What can i say?  Things didn't work out as planned.  I did manage to mount the bearing cups for the headset and get the headset installed and its got a brand new beefed up ENVE fork that fits nice and snug into that tapered head tube.  With the tapered head tube, which is a tad on the heavy side, the beefy fork, and the meaty Paragon disc dropouts this frame is a bit heavier than my average cross frames, around 5.5 lbs with an uncut steerer but its not quite as heavy as I thought it might be.  This is a big boyz frame size 58cm if I remember correctly.  This dude is something you could ride across the country on, road, gravel, dirt, trails, it won't matter.  Its built for abuse and with that paint scheme it looks as though its already been abused. 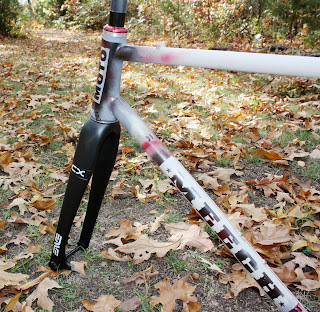 Ok D, so tell us what the deal is with that gawd-awful paint job.  Well,  I just didn't have enough time to get everything painted that I wanted to.  Paul helped me out on one frame for Andy D, gonna have some pictures of it tomorrow, and I was waiting on some warmer weather to shoot a couple of paint jobs on two frames that I was planning on showing.  Well the weather got situated the other day and I went to shoot the base coat on one frame and it looked ok but I had to sand a couple of spots down and it needed another coat of paint over the whole thing.  It didn't happen.  So that was one frame for the show that didn't get painted, it was a gravel-road racer, nice frame that will get painted soon just not before the show.  Then there was this one that I also had planned on getting painted but was waiting on the headset to get here.  Well the headset made it but you can see that there is no paint.  Well there is some paint on it but not a complete paint scheme.  So I JB welded the headset cups into the frame and installed the headset and mounted the fork and just thought I would take it as is, a complete frameset that has only been primed, better than nothing right.  So then I thought, "Well, why don't you at least stick a MEECH decal on the down tube to represent."  Then I realized I had a couple of old stencils, different sized ones, and decided to paint the logo on graffiti-style.  Then I just kept digging out stencils and spray painting stuff on the frame with about 3 different colors and that my friends is how this frame ended up looking like it does.  "Are you just gonna leave it like that?"  No Virginia, I'll eventually paint over everything when I have all my ducks in a row.  "Sure you will."  Can it Virginia! 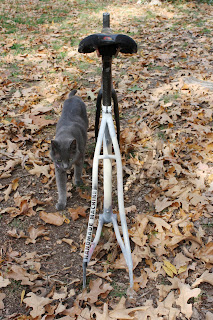 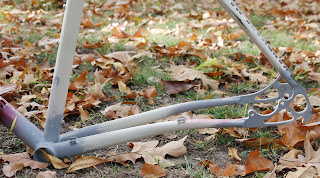 Not sure if you can see it or not but I put a little extra funky bend in the chain stays. 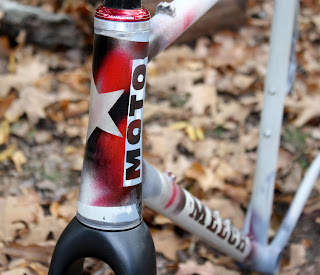 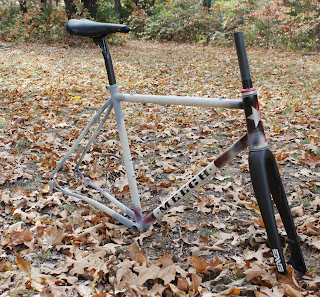 It is what it is and its going to Dallas just like this. 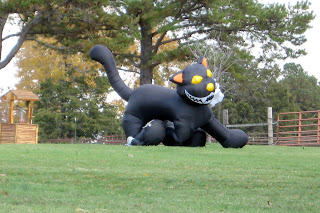 This thing got after me today on my ride.  It was pretty big and scared me a bit at first sight but when it saw me shift into the big ring it didn't even bother coming after me.  It looked like it was wounded or something.  Now a couple of miles back I was just sorta tooling along and rolled up to the base of a little hill, two dogs came out of nowhere and had me on my toes.  It was in the middle of nowhere, no houses, no driveways, no indicators at all.  Just a big roar and leaves started flying off the bushes that they were behind.  I honestly didn't know what it was until they finally barked.  They were two of those big dogs that people keep around cattle and goat farms.  They kinda look like a cross between a big yellow lab and a Saint Bernard or something.  Dude I was diggin in all the way to the top of that hill even though the dogs quit chasing me about half way up.  I was completely gassed and when I went to shift down into the small ring to catch my breath the chain dropped.  Glad I didn't try shifting sooner I may have been Alpo.  Maybe I'm in better shape than I think I am.  No, I'm not.  The dogs were a legitimate close call however that giant cat in the picture is tied down.  I didn't even know big cats like this were native to this area.  They say they only come out around Halloween.  Thats just what I heard.  I did pass a tarantula on the road a couple of weeks ago.  No lies, and no camera either. 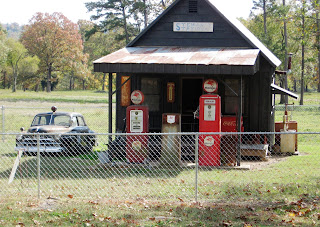 This is a little old gas station that someone restored along the route I was on.  Its pretty neat.  I screwed up with my camera and shot the fence. 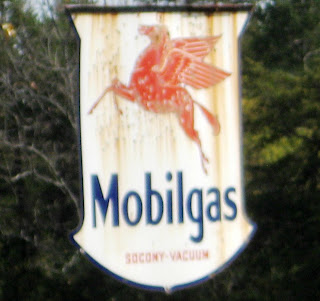 A couple of people have asked me if this Mobilgas emblem was where I got the idea for the MEECH Pegasus logo and while they're very similar I had honestly never seen this image before.  I actually got the idea for my logo off of a piece of old Greek pottery that I found a picture of.  It actually had a warrior with a spear on the back of the Pegasus but it was way too detailed to get on a head badge so we just scaled it back a little.  But the first time I did this loop when we moved to Mountain Home and I saw this sign it kinda blew my mind. 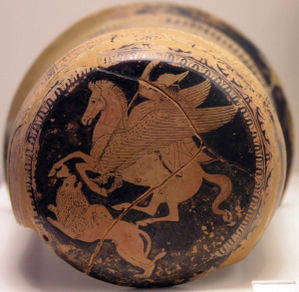 This is where I came up with the idea for my head badge.  Gonna post some pics of Andy's cross frame tomorrow before I leave for the show.  His frame is one of the ones I'm taking to the show.  Its tight.  Thanks for checking thing out.  Hasta luego.