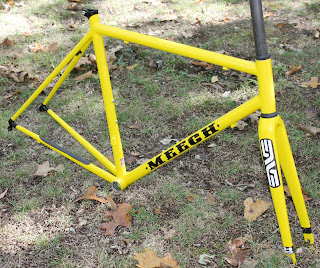 Oh my gosh, where can I start with my complaining about not having enough time to get everything done?  I'm not gonna do it because I know that you all are in the same exact situation.  It is what it is and we just deal with it the best we can.  Its been so long since I have posted a blog that 'Blogger' has changed. The other day I had one of my customers/readers get on to me for not blogging enough and all I can say is that I totally agree.  I finally got something finished yesterday.  This frame has been sitting in our spare bedroom for a month or so but it had no fork, so yesterday I finally got it sprayed.  The frame looks good and the fork looks good however I'm not so sure that they go good together.  I mean its not bad but i'm not sure that they meld.  I was gonna put a steel fork on this frame but then decide to put a carbon fork on to shave some weight and make it more raceworthy, racers tend to like lighter if you know what I mean.  I tell you what, if you want a steel fork to go with this frame I can build it.  Agreed.  I also have another frame over at Paul's getting sprayed, hopefully this week, for Andy D.  Thats actually the last frame I finished building and will be the last that I build until after the Texas Handmade Show thats coming up at the end of the month in Dallas.  The 27th and 28th if you want to go.  I have to get at least two more frames painted for the show and that is my priority between now and then.  The weather is changing, a lot of rain and a little cooler and since I don't have a controlled climate painting booth that presents a problem for me.  It has to be above 65 degrees and thats just to paint carbon, since steel is always about 10 degrees cooler than the temperature outside you need it closer to 75 to be painting steel and next week has a couple of days around that area and I just happen to be off.  wish me luck.  Anyway, luckily Ace said he would help me out even while he's working on his house.  I've been priming everything so all he has to do is spray the base and the clear.  He's saving me.  The forecast shows a few warm days in the week ahead so I'm planning on knocking one or two out.  Oh yeah, I just remembered that I also have to get Yancey's backup frame painted, thats three.  Oh well, I went to church this morning and the preacher said that God has a plan for me already made out so hopefully I can ask you to just roll with me. Thanks. 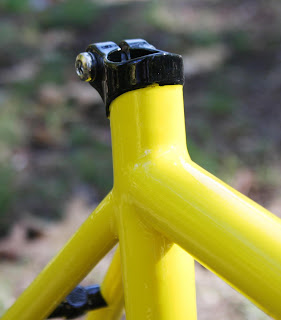 Oh no, more of these shots!.  Yeah, you know it. Hey, I'm an amatuer photographer and there is only so many areas/angles to shoot on a bicycle you know, unless someone is riding the bicycle and then the possibilities are endless.  Cross season has arrived and I have some frames rolling around the courses in all four corners, so send me some pictures of you riding and racing and give me something to blog.  I'd appreciate it. 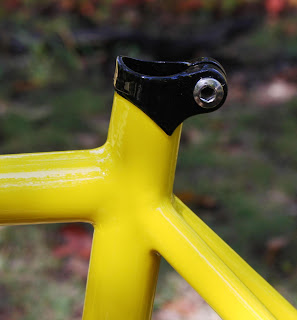 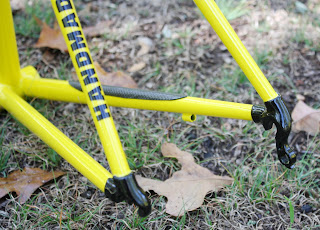 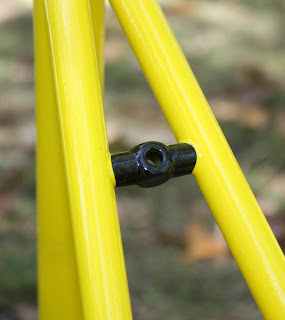 I painted the brake bridge to contrast.  Did I really need to tell you that?  No, but I'm trying to make up for my lack of writing. 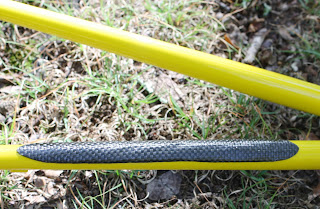 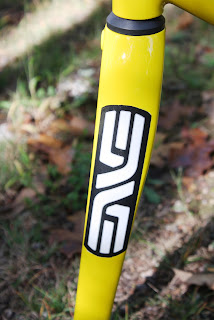 This is what threw me off.  Enve's logo is just too cool to paint over so in an effort to let the world see it I left it unpainted.  The black of the carbon fiber is not exactly the same color black as the MEECH logo so thats where I feel like they don't totally meld.  However you know where they do meld?  This frame and fork are built for one another and will roll beautifully with one another so these two shades of black are just gonna have to get along.  Its all about the ride. 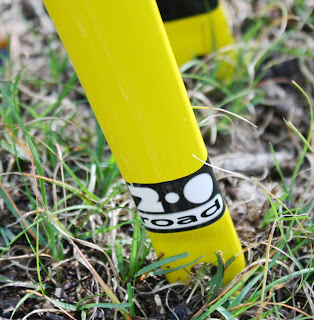 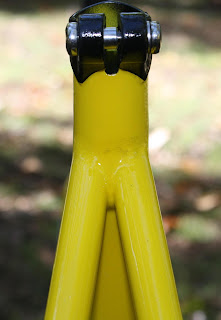 Overall I was pretty pleased with this paint job however I did have a couple of spots of overspray and this is one of them.  Just when you think you have everything taped off frome even one paint particle getting through you peel all the paper and tape off to find that you left a small opening and you're gonna pay the toll.  Its not gonna slow it down one bit.  Black on yellow is a tough one and doesn't allow much room for error. 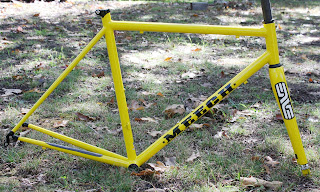 Not an exact match but it will work.  Throw a white stem on it, perhaps a different colored saddle, some bar tape, maybe some wheels that have some white on them, one white spoke would be really cool, come on, use your imagination and you'd be surprised how good this frameset will look. 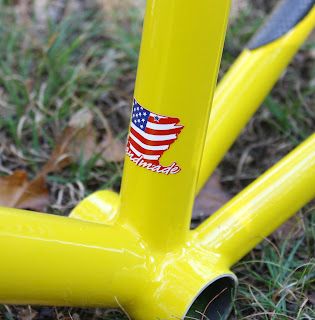 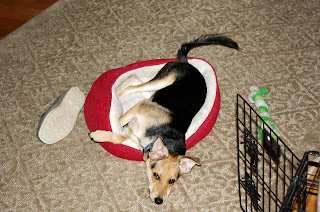 I think Dizzy may have outgrown his bed, it doesn't matter though because he's always sleeping in ours.  He jacks the covers all up.  Half the time I'm freezing with the corner of a sheet while he has the blankets, pillows, and all.  Then he wakes up all fired up ready to go run.  Dizzy consumes a little more time than I imagined but he's worth it, we love him.

Thanks for checking things out and I will try to be posting a little more frequently.  Chao amigos, love ya!