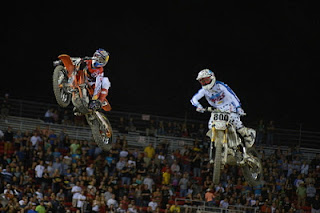 Ok, I know this isn't cycling related stuff but anyone that knows me knows I'm a sucker for motocross.  Last night in Vegas was the Monster Energy Cup race which is just a big, end of the season race for big money and bragging rights.  Its a 3-moto race and if one rider wins all three motos they take home a kewl $MILLION.  Last year Ryan Villopoto actually did it.  He should change his name to Moto, Moto Villopoto.  Anyway, check out this photo above.  Ryan Dungey destroyed his shift lever early in the first moto and rode the whole race shifting gears with his hand.  What?  He finished in 3rd.  This photo is extremely cool and is basically why I'm putting this on the blog, I've never seen anything like it.  Whats even cooler is that he is actually dicing for the lead right here. Forget destroying your shift lever and saying, "I'll have better luck next time."  Forget saying, "Oh well, I'll just ride around and finish the race."  Forget pulling into the pits and having a new shift lever put on the bike and reentering the track 2 laps down.  Screw all that and say, "I'm gonna ride with one hand on the gas and one on the shift lever and I'm gonna win."   'Increible'  Thats spanish for incredible. 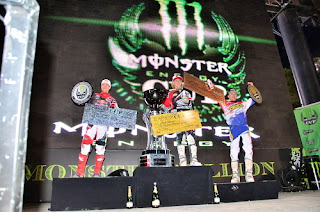