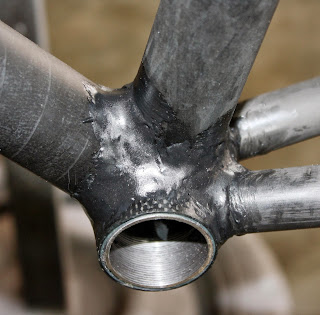 Sorry for the long delay between posts.  Every since the Thanksgiving holiday I haven't worked on the frame at all.  I was finally able to get out there today and get a bit done.  I finished sanding the fillets so I thought I would show a couple "before" and "after" pics just to post something.  I've been at the bistro, my hometown, and cleaning up my yard here, trying to get things done before this winter storm arrived.  It just showed up here about 10:00 a.m. and we've been getting a little ice but its not sticking to the trees, which was my concern.  The road is covered but I don't plan on going anywhere today.  The electrician came a couple days ago and got my heater hooked up, so even though its sub-30 outside the garage is roughly 60-65 degrees and thats perfect. 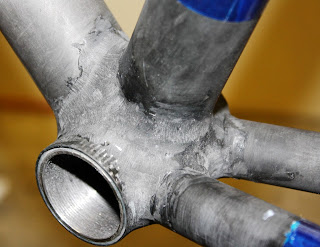 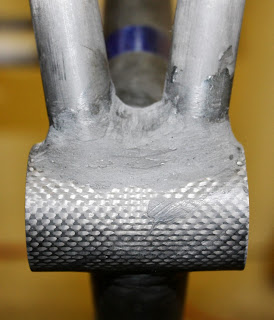 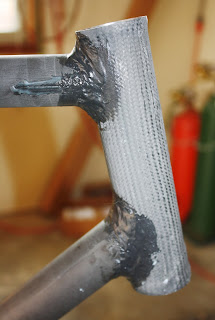 This are the fillets after I brushed them on.  They're not too rough however they're not as smooth as you think.  Even though this is gonna be covered with 3-4 layers of carbon, the rough spots would still show through I'm sure. 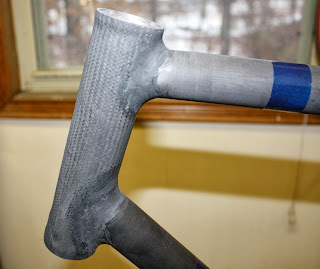 Now they won't.  All the fillets turned out pretty good so I have a good smooth surface to lay down some laminate on.  Its kind of like the calm before the storm for me because now I'm down to the hard part which is laying down carbon and then trying to vacuum bag it all.  I've vacuumed some smaller parts without issue but trying to do a whole frame is a different story.  The head tube shouldn't be too difficult however I'm a little concerned about the bottom bracket shell.  Oh well, the only thing we have to fear is fear itself huh?  You can see the flash tape I wrapped the tubes with.  This is basically as far as I want my carbon to go. Nothing will stick to this stuff.  You can kind of see the ice and snow through the window.  I thinks its already stopped now and I'm glad. 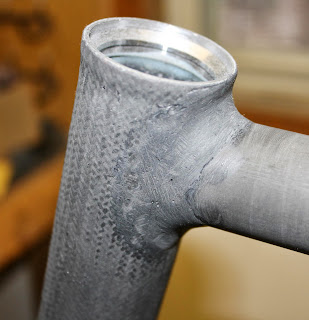 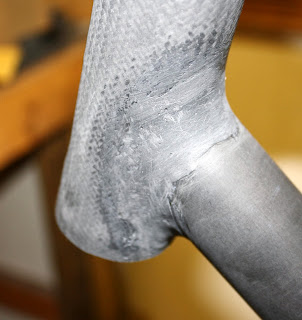 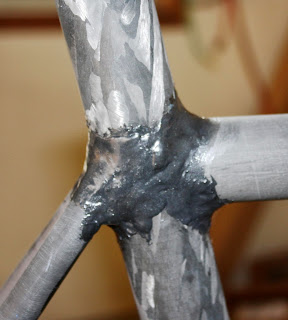 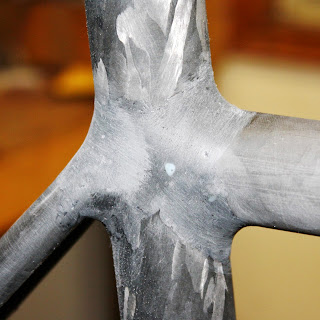 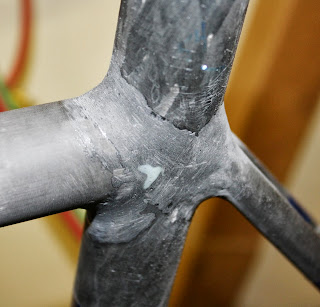 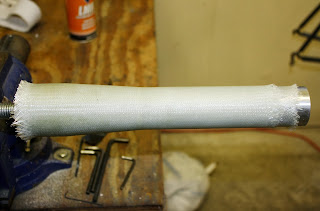 I had Bob put a threaded insert into the mandrel so that I had a way to hold it in a vise for some added ease.  I just got done with my first attempt.  Its drying now.  I put 3 layers of fiberglass down first, then I wrapped a piece of pretty thick uni-directional carbon fiber, and lastly a piece of carbon sleeving for the final layer and for good looks. 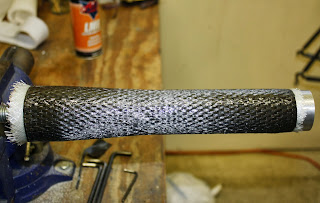 The uni is not in a sleeve form so I just cut a piece to fit the mandrel and hand wrapped it. 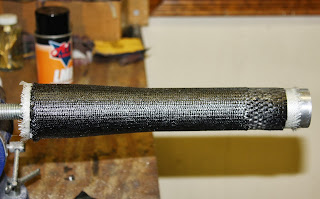 The sleeves are cool because they open and contract to whatever the diameter of the mold and after its on you can work it up or down in order to make it tighter.  Its like the Chinese finger trap.  Now if only this thing will come off the mandrel after its cured.  I sprayed it with some high-end mold release but I still have my fingers crossed. 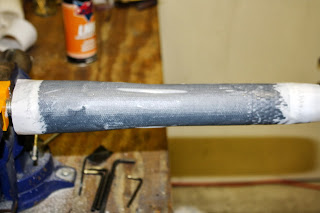 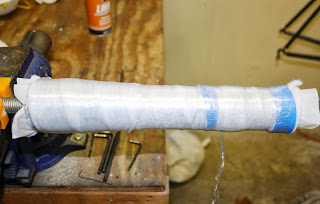 All compressed with stretch film. 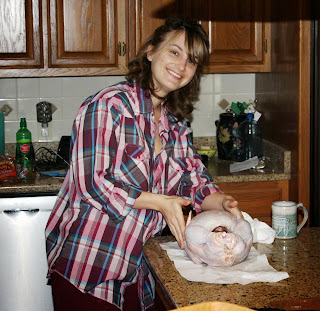 Here is a pic of Anne cooking her first turkey.  She's an excellent cook and it turned out great, dressing was good too.  I've only cooked a turkey one time.  I did it years ago just to give it a try, it wasn't even Thanksgiving or anything.  Anyway, I forgot to take the plastic bag full of innerds (the neck, giblets, etc.) out of the bird before cooking it.  I didn't forget, I just didn't know they were in there to start with.  I had eaten most of the turkey before I realized they were in there.  I was embarrassed and never told anybody about it.  Then, one Thanksgiving a couple years later, my mom was telling us the story of the first time my dad cooked a turkey and he did the same thing.  The apple never falls far from the tree huh? Apparently its not that uncommon.  Always remember, there are two plastic bags inside the turkey.  The first one is easy to find but the second is easy to overlook.  If you bake the turkey with that stuff in there it will probably be alright, however if you fry the bird that might could give it a funny taste. Ah, just pour some epoxy flavored gravy on it and you'll never notice.  I've personally never eaten fried turkey.  Enough about turkey, I'm out of here.  I'll keep you updated on the head tube.