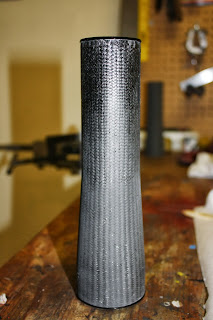 I have one complete carbon fiber tapered head tube finished, and it only took two attempts to get it right.  Well, two and a half.  This is the second one that I did the other day but i decided it would be better with a layer of uni-directional carbon in there and then I threw one more sock on top of that for cosmetic purposes.  Its a tad over 2 millimeters thick and this thing feels very solid in your hand.  I'm almost certain that its more than enough for a mountain bike which makes it enough for most any bike.  I'm gonna use this on the next carbon frame I build.  "Are you ever gonna finish the first one you started?"  I'm getting closer.  Needless to say, I'm very happy with how this turned out and I can't wait to use it.

In other news, I couldn't let yesterday's failed bike ride attempt go on any longer.  So as soon as I had a cup of coffee and took Dizzy for his morning walk, I slammed a PB&J sandwich, mixed up some Psycho Ragin' Punch, and got the horse out of the stall (bike out of garage).  I skated through the first 300 meters like I had done this before (I did, yesterday), without falling mind you, and out onto the  road out of the neighborhood, then onto the main roads where I proceeded to ride for over 1 hour, yes, over an hour.  And oh what a ride it was.

"Really?  What could happen in an hour?"

I stopped at the car wash before pedaling out onto the main road in order to get the ice sludge out of my cleats so that I could clip in, then I was off.  Man it felt good to be spinning circles again after 10 days of walking the dog on ice.  Ok, they weren't circles that I was spinning but more like squares, but they felt good anyway.  It was 32 degrees, wet roads, and a North wind blowing around 20 mph and I wasn't feeling any of it because i was just so happy to be on my bike.  I quickly dropped a couple of gears down into what I consider my cruising gear (53 x 19) and after about 45 seconds of that I realized that I wouldn't be doing any cruising, so I backed it off a couple of teeth and just decided to enjoy the ride and not worry about going fast.  The wind was slapping me in the face as the icey water on the road was trying to get me legs a bit wet.  I felt a little like I was on the Cornelia Marie catching crabs in the Bering Sea, not really, but i was a happy camper, all the way till about mile 6 when just as I crested the top of a little half-mile long hill the rear tire starting feeling a bit soft.  "PISS!"  Pardon my language Virginia, I'm no saint you know.  Not a good time for a flat.  "Is there ever?"  The part that really lathered my arse was that this was the third time that i got a flat at this same exact spot.  "Whats going on here?"  So I crest the hill and find a small clearing to change the tube.  At this moment I felt fine, not cold at all, just a little put out with having to change a flat.  The flat tire change went pretty smooth for the most part but by the time I was finished the fingers were wet and greasy and starting to get a little cold.  I packed my bag, threw the gloves on my dirty, wet hands and I was off again in the big ring going downhill anticipating getting warm again.  I pedaled for all of one minute when the tire started going down again.  All of the drivers that were passing were kinda staring at me as I stood there bellowing  Sunday hymns out loud.  I was not happy but there was nothing I could do about it.  My first instinct was to call someone, but who? I didn't really want to see anyone at this moment.  My second thought was to stick out my thumb, as I've always seemed to be able to catch a ride when I needed it, but I didn't really want to talk to anyone.  So I climbed back in the saddle, big ring and all, and just started pedaling back up the hill.  The tire and tube were screeching against one another as the rim bounced an inch off the ground every time the valve stem came around.  I didn't care.  I normally take pretty good care of my stuff but at this moment I didn't give a tootleey squooot.  That little man inside my head, Partially Semi-Smart Dimitri, said,

"You're gonna trash that tire."

Then he said, "You're ruining that wheel."

I retorted, "Good.  I want some new ones anyway."
I even told that little smart aleck that I didn't care if the frame broke in half because I'll just build another one.

This was my S3 frame and if you've ever seen how thin that stuff is then you probably know its not a good idea to be riding on the rim, at this moment though it didn't matter.  I even dropped a couple of teeth on the back and accelerated while standing out of the saddle.  All and all it wasn't even that bad.  I actually think I rode the 6 miles back to my house faster on the rim than I did with 110 psi in the tire.  Yeah the tire is toast, and yeah the rim is garbage, but I think the frame is still ok, I think.  I'll have to check it out later.  Anyway, that edge that was building for the last few days has been dulled a bit. I feel pretty good for the most part.  I may be in better shape than I thought I was.  No, I'm not.  Did I mention that I stepped in a pile of Pinky's poo while cutting through my backyard?  Nothing like having frozen dog crap embedded in your cycling cleats.  I'm switching back to Vredestein.