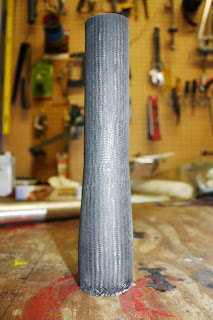 Last night I peeled off my second attempt at a tapered head tube.  This one turned out a little nicer than the first one mainly because I only used the fiberglass and carbon sleeving on it and no uni-directional.  The uni-directional has a tendency to wrinkle easily when doing wet layup. This one turned out much better but did have a couple small wrinkles that were easily sanded out.  After talking to a tech specialist at West Epoxy Systems I think the head tube will be a little more frameworthy with a layer or two of the uni, however I still think this tube is plenty strong.  You also have to remember that its gonna get even stronger when I wrap the joints with another 2-3 layers of carbon, but its better to be safe than sorry.  This second head tube didn't slide off the mandrel quite as easy as the first and I'm not quite sure why.  I fought it for quite a while and didn't really know what else to try so I decided to put it  in the freezer and hope the mandrel would shrink a bit.  Not sure if thats what did it or not but it did break free with the next attempt to spin it off.  I think I may have tried to pull it off too soon and the epoxy wasn't dried enough.  Honestly I don't have any idea but its off now.  I am gonna add a layer of uni-directional for strength and another layer of sleeving for cosmetic purposes and then use this tube on the next frame I build. 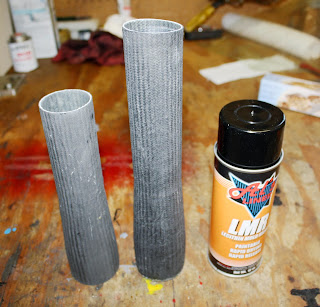 Here are the two side by side for comparison.  The shorter one is much rougher, more wrinkles.  That LMR stuff is the mold release that I bought locally at the paint store.  Its apparently used on bed liners in some way or another, perhaps bed liner molds or something.  Its worked pretty well so far but I'm gonna experiment with other release agents to find the best one. 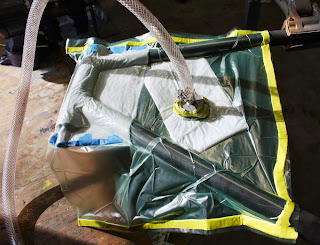 I'm fixing to lay down some laminate on this frame in the coming days and so I wanted to become a little more comfortable with the bagging process.  The few times I've tried in the past it was kind of a hit and miss thing, never leaving the experience feeling like I knew what I was doing.  This was a dry run and I took special care in making the bag, and I used quality components as well.  Everything seemed perfect but i never could get it to pull a good vacuum.  Kinda like my ice-driving escapade the other day, everything appeared to be right however the results weren't making sense.  Everything on the pump checked out and I could find no sign of leaks anywhere in the bag but the pump was only pulling about a quarter of the vacuum needed.  Then a thought struck me like lightning.  "Could it somehow be pulling air through the frame?"  The head tube is plugged but only with steel cones and they aren't air-tight.  Then I looked at the open end of the seat tube and the bottom bracket shell and remembered the vent holes that are cut at both of those junctures.  "No way!"  I plugged those holes up and it pulled a full vacuum in about 5 seconds.  "Wow!"  Just like finding the emergency brake on with my car spinning sideways on the ice. But I have to say that I didn't feel quite so dumb this time because this was an easy one to overlook being unfamiliar with the vacuum bagging process. Maybe that whole parking brake thing was easy to overlook too since I'm not familiar with driving on the ice? "No Dimitri, that was just plain stupid."  What can I say?  The cold weather really does give me brain-freeze. My mother is a blond and I think I may have some of her airhead genes.  I most definitely do.  Love you mom!  My mom  can be pretty ditzy sometimes.  Once when she was driving through Mountain Home to visit me with one of her friends and she got pulled over by a cop who had been following her for like 5 miles with his blue lights flashing.  Her and her friend were just blabbing and laughing and never saw him.  When the cop told her that he had been trying to pull her over for like 5 minutes she just told him that she concentrates on whats ahead of her and not behind her, then her and her friend just busted out laughing again. I don't even think she got a ticket.  If I as much as walk to the mailbox without a seatbelt on I'll get busted. 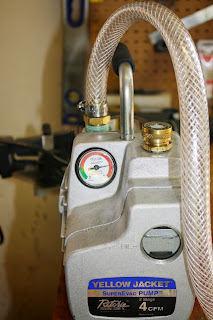 Here is the gauge before I plugged the seat tube and bottom bracket shell.  This gauge actually starts at the red and goes counterclockwise.  The green is a stronger vacuum. 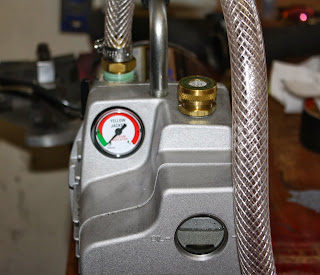 This is what you're looking for.  "Thank goodness."  I'll sleep good tonight.  And after 4 days of driving on ice I'm getting a little more comfortable with that too.  Not knowing what mistakes you're making can almost drive you crazy but when you figure it out it sure feels good.  Never give up!

Thanks for stopping by.  Later.