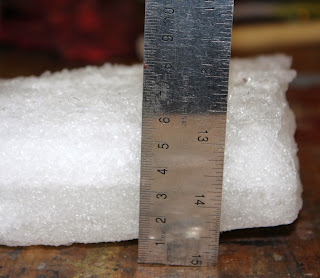 This is the beginning of what rolled over Mountain Home the last couple of days.  Its roughly 2 1/2 - 3 inches of ice and then the snow started and it didn't stop for 24 hours.  I know thats not too big a deal but I've got no other material to work with right now.  I'm trying to make something out of nothing.  I haven't done anything in the shop since the carbon head tube because I've been shoveling snow and ice, taking Anne to and from work, getting her car unstuck and restuck multiple times, etc. I did one of the dumbest things that I've ever done in my life.  We parked in our neighbors driveway on the first night so that we could have an easy time of getting out onto the road, as we have to go up a hill right out of our driveway.  Anyway, so we get in the car early to leave and I can't even get this thing rolling.  The tires are spinning and we aren't moving an inch. So I shoveled everything out from under the front wheels (front wheel drive car) and we manage to get out into the street but then the car is only sliding sideways and not going anywhere basically.  We are on a decline, we're not stuck in anything, and are defying all laws of physics here.  Someone even stops to help push and get us started and the car just slides sideways again and comes to a stop blocking the whole street.  I was lost, totally lost, didn't know what to do anymore.  I know that I'm not a good snow/ice  driver but this made no sense at all.  Then I saw it. The parking brake was on.  I wish someone would've been there to slap me so that I could at least feel punished for being so stupid, but as it is I'm just having to live with it.  I've never shoveled so much snow and ice in my life.  I seldom even pick up a shovel these days, maybe 1-2 times a year.  My back has never been this tight ever.  Its kind of a good thing though because I don't use my core muscles enough and my back could use a little strengthening and having to do it is about the only way I will do it.  Lets move on. 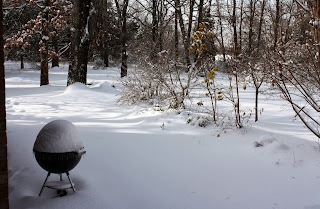 I didn't intend for this picture to be here.  I thought I deleted it but apparently not.  This is a picture of  'snow in a backyard that didn't get deleted', if you've never seen that before. 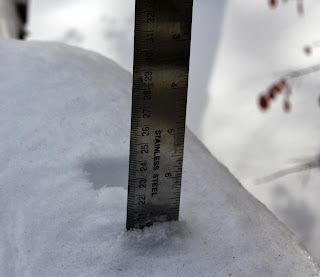 I measured the snow just for the sake of having something to do.  Its approximately 210 millimeters deep.  You thought it was 6 1/2" deep didn't you?  Thats also a 15 inch ruler. You would've known that if you would've payed close attention to the other boring picture.  Framebuilders shouldn't use inches, only millimeters and sometimes centimeters.  Inches are like big globs of unneeded cole slaw on your plate.  Notice that this is a stainless steel ruler.  What'd you think I would use, aluminum?  Titanium?  Oh man, you're making me really laugh hard now.  If this ruler was made from titanium it wouldn't be stiff enough to stand up straight like that, it would be folded over like an ice-stricken tree branch.  Aluminum would've cracked.  Ok, I'm messing with you guys.  Every material has its own rights and should be respected but I'm using the First Amendment here. 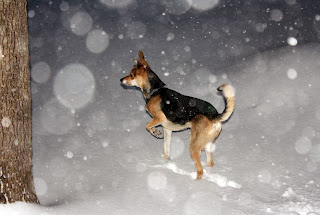 Here is Dizzy striking a pose as the snows starts accumulating.  It would eventually get closer to his belly, and he has pretty long legs too.  He and I are built just alike, long skinny legs, big nose, big ears, and no body fat.  He seems to enjoy the snow much more than I do.  I don't like it.  It slows me down, and I move slow enough as it is. I can't help but to wonder what it might be like having four legs instead of two as I'm walking him across the icey road.  Ok, I'm out.  I just wanted to touch base as i have no idea when I'll get anything worthwhile done in the next few days, and don't even want to think about when I might get a ride in.  I rode for an hour and a half on Wednesday because I knew this was coming.  I wish I had a mountain bike or at the least a cross bike just to stretch my legs.  Anyone know a framebuilder?  Chao.