Blogging is starting to pay Dividends 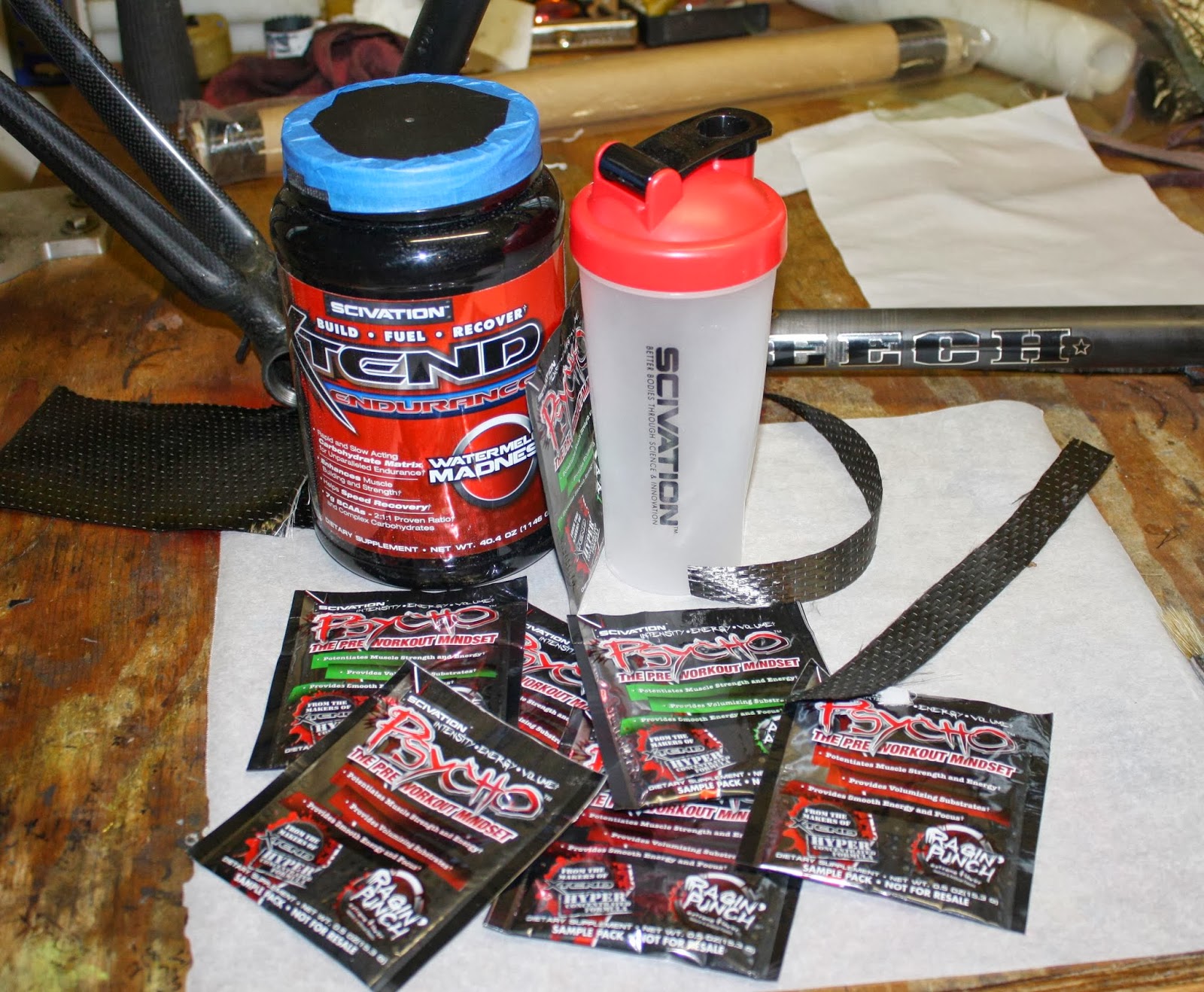 I received a little package in the mail yesterday from Kevin Waggoner of Scivation.  I had never heard of them before but they make a variety of performance workout/recovery drinks.  Turns out someone sent Kevin a link to one of my old blog post, The Highway Salute, and apparently he enjoyed it enough to shoot me an email and also send me some of their products to try. http://meechcustombikes.blogspot.com/2012/12/the-highway-salute.html
I don't train much anymore so I never buy any of these type products, but if someone is gonna give them to you then why not.  I couldn't wait to try them out so today I decided I was gonna go ride for a short bit since I haven't been on the bike in over a week and it would be a good excuse to mix up some of my new juice.

When I don't get to ride a little bit every couple of days I start to develope a little edge. I guess all cyclists are like that.  I wouldn't make a very good caged animal.  Ever seen Katt William's standup act about the tiger attack at the San Francisco Zoo.  Pretty funny stuff.  I'll see if I can't find a clip.  So anyway I'm itching to ride pretty bad.  The main roads are clear of ice however my neighborhood is still pretty bad.  The roads are about 50% ice with a clear tire path for cars.  Normally I wouldn't even consider going for a ride in these conditions but I needed to take the edge off.  I thought that if I could just get out of the neighborhood and onto the main roads I could get a short ride in to curb the enthusiasm.  The conditions were less than stellar.  It was 34 degrees and starting to spit rain but I got dressed anyway, got my bike, closed the garage door, and then just kinda stared down my driveway for a few moments.  I knew this wasn't a good idea.  It was gonna break my record for the worst day I've ever ridden.  I've ridden when it was 10 degrees before but it was dry on that day.  The coldest day I have ever ridden the temp was 37 degrees and it was pouring down rain,  and I could only stand it for an hour and a half.  I'm sure others have endured much worse than that but that was one long 90 minutes as I was soaked and freezing within 5 minutes of being on my bike.

As I stood at the top of my driveway looking down the rain started coming down a little harder.  The driveway was wet and seemed slicker but i told myself that the temp  was over freezing so that it couldn't really be ice, only wet. If ice isn't slick enough already just add a little rain on the top of it and see what happens.  Then, right before my very eyes, a fight broke out.  A fight between the old, young and dumb, do anything Dimitri, and the new, older, partially-smart, wiser Dimitri.

The wise Dimitri said, "Its not a good idea, wait another day."

Then the old, young, dumb Dimitri shoved me a bit and replied, "You only have to get to the main road and then its gravy."

Then the partially smart Dimitri said, " This driveway is already getting slicker. Your bike is already sliding and you're standing still."

Then the dumb Dimitri landed the knockout blow when he said, "If you had any balls you'd do it."

So I clipped my right foot in and dragged my brakes down to the bottom of the driveway to see if it was slick or just wet.  I came to some patches of ice and I sort of skated my way over them to any little pavement I could find.  I didn't see anyone looking at me and I hoped I wouldn't. Then about 100 meters in there was a lady turning her car around.  Her eyes said it all but I just looked the other way.  I found a patch of pavement and clipped in and actually started pedaling with both legs.  Then there was a lady on her porch smoking a cigarette, I didn't even look at her. I could see her looking at me out of the corner of my eye but I just pretended to be focused on the ice, which I was.  Then there was a car sitting at the next stop sign.

"Why do I feel guilty of something here?"
"Because you're guilty of being stupid."

Finally, after 200 meters of skate riding I reached the main road that leads out of my neighborhood and it looked to be clear.  I clipped in and took off pedaling down the hill and no sooner than I got a little speed up the front end washed and I was sliding on my side like a flounder on a wet boat dock.  It didn't hurt but I was pissed off.  I didn't even look around to see if anyone was watching.  I just picked up my bike and walked across the neighbors yard and into my backyard.  "Rides over!"
So I'm sitting here typing this with a headache.  Thats the first time I've been on the pavement in quite a while, probably since I put my head through the back glass of the Ford Taurus that was parked on the overpass a few years back.  "MEDIC!" 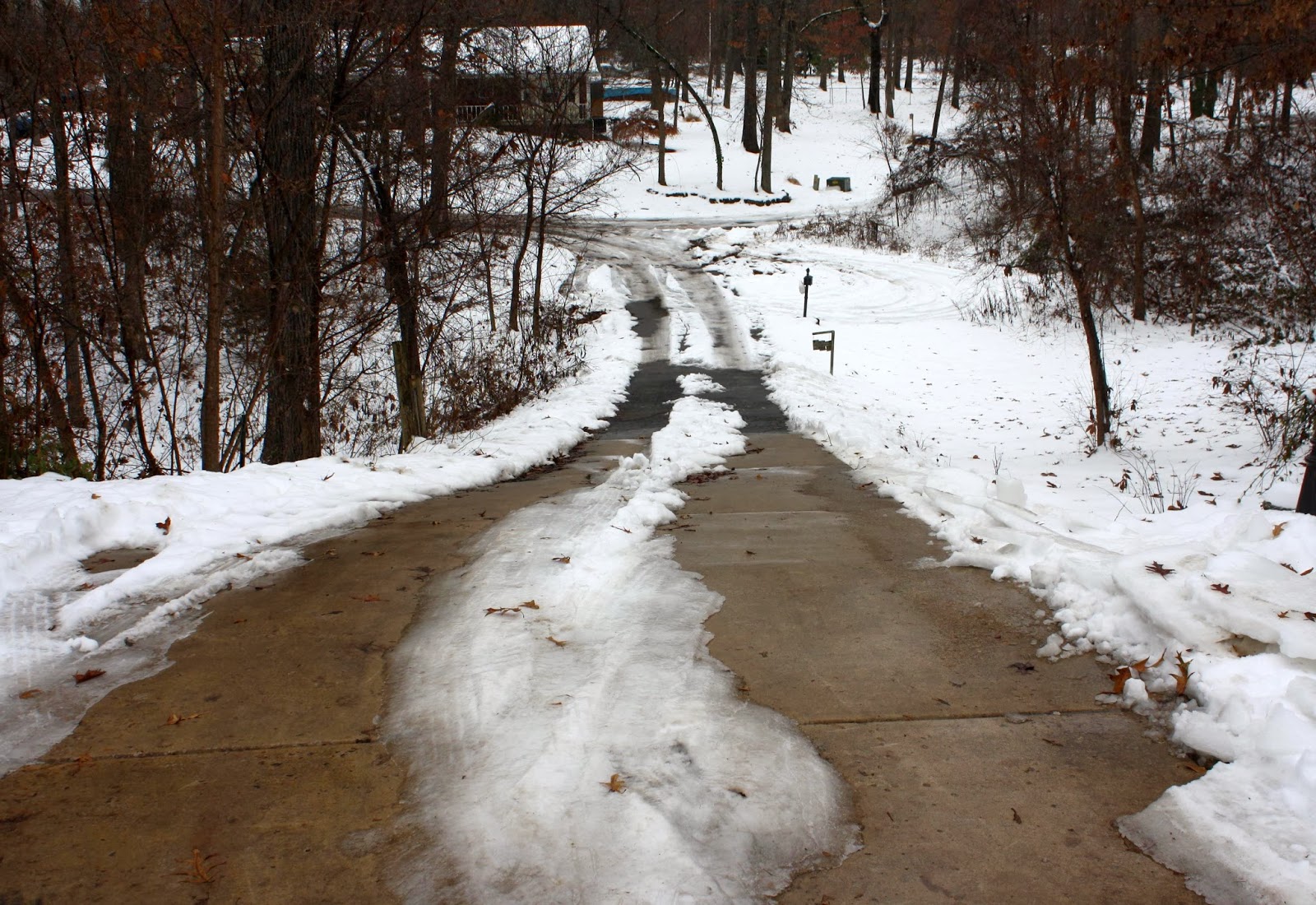 This is the view I was staring at while the revelation was taking place between Smart Dimitri and Dumb Dimitri.  The entire neighborhood looks like this for the most part and I never even got out of it.

Anyway, just wanted to say thanks to Kevin for the workout drinks. I'm still drinking the Apple Asylum that I mixed up as I wasn't gonna waste it.  It taste good.  If only I could get the guys from Preparation H and Little Debbie to read my blog.  Have a good weekend.