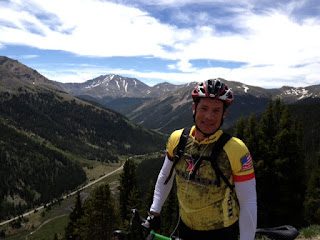 This is Scott Taylor, an old riding buddy of mine that I met way back when we were in college.  He and I and a couple of roommates of his were always hanging out on our bikes.  We were notorious for doing nighttime rides, no lights either.  Despite moving and getting married and all those things that can change your life we're both still riding pretty regular, and Scoot (nickname because he's fast) is an avid rider of the annual Bicycle Tour of Colorado. I went with him about 3-4 years ago and it was a bicycle trip of a lifetime.  We've had some good ones in the past.  One of the most memorable was roughly 10 years ago when he called me up out of the blue and wanted to take a road trip to Taos, New Mexico.  When we arrived, Scoot had booked us a stay at an out of town hostel/campground called the Abominable Snow Mansion.  So we walk in the front door and a cloud of "freakin weird" just slaps us in the face.  Couldn't really put your finger on it but it just felt weird.  There were a handful of people just sort of laying around all over the place and it was kinda dark and dingy.  If you've ever seen the movie "A River Runs Through It" and you remember that scene where Brad Pitt, his brother, and their dates walk into that old card shack/bar and everyone just sort of stops what they're doing and starts staring at them, well it sort of felt like that.  So no big deal, we get our key and go to our room.  Everyone that we'd meet would tell us they had been there a couple of months.  They would all hang out outside under tents and canopies, some dude would be rolling up little bails of incense to sell, and another dude was making a pair of gloves out of yarn, and just stuff like that all day long.  The dude that was making gloves told me that he had been living there for, yeah you guessed it, a couple of months, and that he was just making gloves and selling them to get by.  So I asked him how much they sold for and he kindly told me around $50, so then I asked him how long it'd take him to make me a pair and he told me about a month.  "What? A month?"  Do the math on that one and see what you come up with.  Something is funny here.  Oh well, its interesting to meet all kinds but there was one morning that I didn't much care for.  I was walking out to the truck one morning and in the backyard of this place it had all these tipis that you can rent.  I noticed out back behind one of them there is this fat little indian-looking boy with a bow and arrow and he's chasing this cat around and then he took a shot at it.  He missed it luckily but then he ran and grabbed his arrow and started trying to sneak up on it again.  I could tell the cat was sketched out by this freaky little indian and so I picked up a rock and right about the time he was taking aim I hurled the rock at these garbage cans close by and rattled his nerves a little. He never even saw me and that was good because I wanted him to know what it felt like to have someone  hunting you.  Hopefully the cat made a clean get away.  You know if an indian is fat that is strike one right there.  Whoever heard of a fat indian?  Anyway, the trip was interesting and we got a couple of good rides in not to mention we climbed some mountain out there, on foot that is. Nightmare!

Check this farm out and see what you think.   Check out the video.

So back to the photo.  The photo above is Scott at the top of Independence pass I do believe.  I rode up this one the year I went with him.  I believe this is the one that they did in the Tour of Colorado, or the Pro Tour Challenge I think is what they call it, a couple of years ago and it turns into hardpack dirt for the last few miles.  I posted a pic with Andy Schleck and some others laying it down.  Its a killer climb.  Scoot has been riding a MEECH for 2-3 years now and you can see he's sporting some Team MEECH colors.  Thanks for the photo Scott!  Wish I was there with you guys. 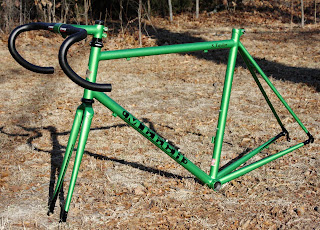 This is Scoot's frame.  Is that green or what?  This frame has about three Bicycle Tours of Colorado on it.  Scoot has been a MEECH supporter since the beginning and he's a blast to hang out with.  Thanks for riding a MEECH! 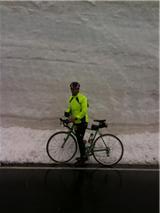 Here is another photo of Scoot from a couple of years ago.  Sometimes the weather doesn't cooperate to well in the mountains.  This photo won't enlarge for some reason.  Enjoy.