Hey, what's up?  Been a while huh?  I know.  I've been an absentee blogger.  I can't help it.  Its not that that I haven't been working on stuff, just the opposite.  I've got a frame in the jig, just finished painting another, 2 more to paint, 2 more to build, 3 days a week at the bistro, mowing grass here, mowing grass in hometown of Jonesboro, running dogs, keeping the wife happy, and oh yeah, trying to squeeze in some riding time.  Thats what we're really all living for isn't it.  Well, sort of.  That an everything else.  Last week I managed to get 3 short rides, 3 days in a row, which is the first time I've ridden 3 days in a row since I can remember.  I'm not even sure you can count the 3rd day because I was so tired it was more like drifting than actual riding.  Lets just say I sat on my bike for 3 days in a row.  I'm still riding the cross bike that I built up last July.  This is the first time since I don't know when that I've just ridden one bike all year long.  Usually its a cross bike for 6 months in the fall and winter and then a road frame in the Spring/Summer but this year I haven't even taken the time to build up my road bike yet.  I need tires, cassette, chain, and would like to have some new compact cranks and a new wheelset but I don't know when I'll break down and actually buy them. The Vittoria tires I'm riding on now have been showing the orange wear marks for close to two months now.  I still have a pair of new Giro shoes that I haven't put the cleats on yet.  Oh geez, if I die before I get all this stuff done just throw it all in the casket with me and I'll eventually get to it in heaven, should I make it there.  And oh yeah, don't close the lid of the casket and bury me, that kind of stuff kinda freaks me out.  Just take me to the coast and sort of float me out past the breakers and let me sail. I've always wanted to become comfortable with the ocean however I've always been a little scared of it at the same time.  I figure if I'm dead I won't be scared at all, ok maybe a little bit.  If I run into Bin Laden out there I'm gonna make him kiss the back of my hand. http://www.youtube.com/watch?v=iBGZ1Vc2KPU
Don't forget to put some sun screen on my face and my Oakley Zero sunglasses.  Those are the best sunglasses for cycling ever made.  Just my opinion.  Really though, I've got no complaints.  Life is going good right now.  My family, friends and I are healthy and we manage to spend some time together and thats a good thing.  I hope everyone else is as fortunate.  Your family and good health are everything.  Love 'em!

"So what's the deal?  Why haven't you been blogging Dimitri?"

The honest truth is that there really hasn't been anything very new or exciting to write about.  Everything has just sort of been plugging along but nothing has really stood out.  So instead of just trying to throw something on here without feeling I just decided to step back for a while until something comes up.  I hate to tell you this but still nothing has come up.  I'm just writing because its been so long.  I did just finish up a nice paint job on a frame for an old customer and its probably my best one yet.  I'm pretty stoked about it and I would have posted some pics already except for I'm waiting for his fork to get here so that I can paint it to match.  Unfortunately I think the fork may have got lost in the mail.  So there's that delay.  I have some photos on my camera of my current build but I just haven't uploaded them yet, and to be honest they are just more of the same.  You know, miters, brazing, etc.  I figure you guys have seen enough of those to last a lifetime.  Anyway, I'll probably still post some pics when its all cut and fit just to have something to post.  It is gonna be a sweet frame, and its a cross frame, my favorite.  I love building cross frames.  I love riding cross bikes.  Don't care to much for racing cross though.  Why you ask?  Cause it hurts.  I don't mind taking a beating on the bike but I'd rather not have to get off and run while taking a beating. Imagine if every lap of a crit you had to take a whip with a leathered-up bamboo stick across your back.  That sounds like an interesting race to watch huh?  What's funny is that if someone put that kind of race on and offered some prize money there would be two hundred guys sign up for it.  Talk about a crowd draw. Wonder what the prize list would look like?  If its anything like a lot of the races I was at it would be like $50 for 1st, $30 for 2nd, and $15 for 3rd.  That wouldn't buy enough Neosporin to heal the wounds from the whipping.  Holy cow Batman.  Now imagine being in that race and getting dropped.  Now you're off the back, alone and embarrassed, and the whip-bearer is getting some wide open real estate to really put in some good licks.  I'm actually fidgeting around in my chair right now.  If this type of racing ever catches on I'm gonna start manufacturing padded jerseys. 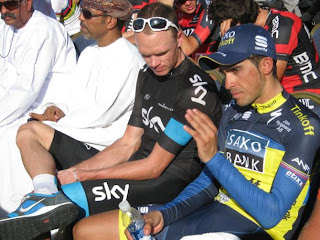 What else has been going on that is not interesting?  Well, Chris Froome just won the Dauphine stage race.  Everyone is getting tuned up for the Tour.  This one could be a good one, as opposed to last year's Tour that nearly put every cycling fan in the world to sleep.  I like Brad Wiggins ok but the Tour last year was a snooz-fest.  I like the way Wiggins deals with the media though.  First off, I don't think he gives a rat's ass about them.  They're all trying to overhype some small thing to create a story.  Second, he just says things like he sees them.  He tells it like it actually is.  For whatever reason, I seem to get, or think I get, what he's saying.  Lastly, I believe Wiggins has had a fairly successful cycling career and will continue to win a few more things in the future, but then I think he will just leave racing behind and not really miss it.  Some riders just can't quite seem to let go of their cycling careers but i think Wiggins will just say "Adio, I'm outta here.  Cheers."  But then what do I know?  He may fall into a drunken stupor and gain 200 lbs and try to come back again when he's 42.  That will be a good story for the cycling media.  Anyway, back to Froome and his rivals.  Who are the rivals?  Well, they say there are a couple in the likes of Valverde, Rodriquez, Evans, and a couple of others, but I think there is only one guy who can beat him and thats el Pistolero, Alberto Contador.  Froome has been winning just about everything he's entered all season long while Contador hasn't seen that much racing and has basically been off the map.  He didn't really impress anyone at the Dauphine but I think its a mix of playing possum and riding himself into form right up until the last week of the Tour.  Contador is putting all his eggs in one basket this season.  This year's Tour de France is gonna be "Victory or Death."  Nobody ever knows whats gonna happen in the Tour but if Froome and Contador keep their bikes on two wheels this race will be a showdown better than the Armstrong-Ullrich years.  If anyone remembers how Alberto Contador rode last year's Vuelta ( he attacked Rodriquez everyday and cracked him on the second to last day) you know what I'm talking about.  I watched it everyday on Steephill.com and I've never seen anything like that before in my life.  I don't think anyone had.  I don't know much about Froome but he is badass this year, as he was last year as well.  Froome thinks this year is his year to win the Tour and Sky is bringing a stacked team to support him.  I think he will be the man to beat but I'm still gonna pick el Pinto to win the overall and I think Froome will be on the podium with a very disappointed face.  And then in next year's Tour I think Nibali is gonna stand on the top.  Oh no, what am I babbling about now?  Did I just make a prediction?  "No, you made two."  Oh well, its just for fun.  The only thing I really know is that I have to go walk Dizzy Dog right now and then go to work at the bistro.  I'll get some pics of the latest work just as soon as I can.  Thanks for stopping by.  Chao amigos. 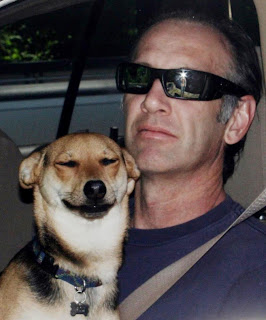