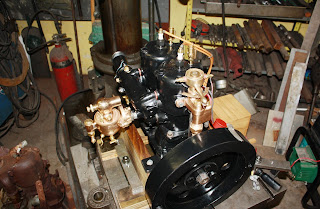 This is a 1905 Roberts inboard motor that my friend Bob Davis has fully restored for someone.  He just finished it up the other day and while I was at his shop the other day he did a trial run to make sure everything was working.  It works.  He primed it with a little gas and using an air drill gave the flywheel (if thats what it is?) a couple of turns and it fired right up.  It has this really deep slow idle that just sounds really cool.  Not sure if its supposed to have a muffler on it or not.  I got a really cool video clip of the whole thing however for some reason I can't get it to upload onto Blogger.  There may be another way so I'll keep trying.  Anyway, I know this blog is mainly about bicycles but when I get the chance to show something interesting I'll take it.  Bob Davis is one of those people that you're lucky if you meet in a lifetime.  His depth and knowledge of a lifetime of work in machining metals is second to none.  His machine shop is practically a museum.  To prove it I took these photos.  Every once in a while you meet a man...well, just check out the pics. 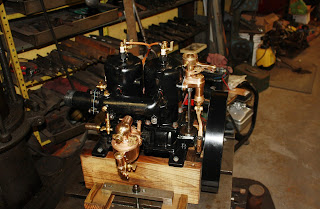 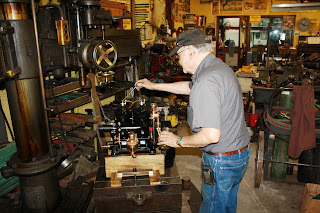 This be Bob Davis.  Probably the most famous person in Mountain Home but also known all over the world for his motorcycle building skills. 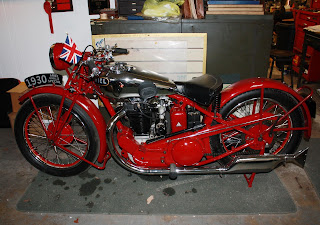 This is a 1930 Aerial.  Ever seen anything like this?  I doubt it.  This is really hard to comprehend however Bob just told me yesterday that there are only two, yeah 2, of these in the world.  One is in England and the other is right here.  Is that possible?  Its still hard for me to grasp. 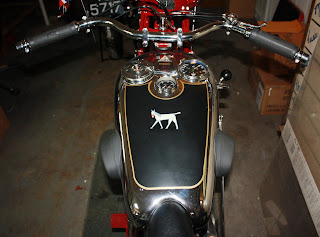 This would be your view if you were so lucky as to ride or even sit on such a bike.  I have never touched it.  He wouldn't mind if I did however I have no business touching a bike like this as I don't even fully understand all of its beauty, but I try.  I'm a motocrosser.  That little Aerial trademark/head badge reminds me of Don Quixote. 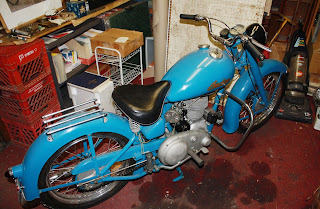 I've posted a pic of this one before.  I think maybe this is an Indian.  I forget. Yes, it says it right on the gas tank. 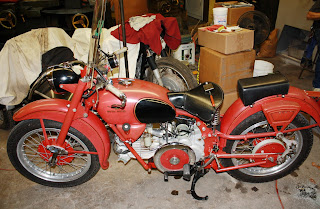 Moto Guzzi.  Gotta love anything with the name Moto in it. 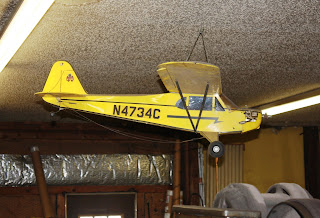 One of his old passtimes. 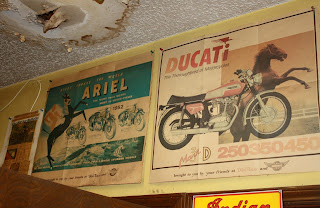 I would imagine these posters are pretty rare. 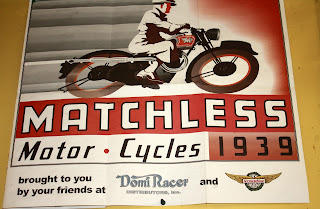 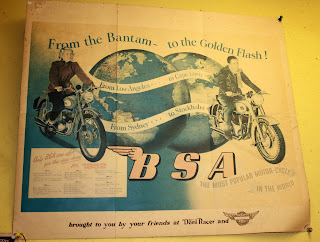 This is not Bob here but it is the guy that he bought the Aerial from.  Now the guy keeps calling Bob wanting to buy it back but Bob keeps saying, "No, no, no."  Bob told me what the guy was offering and what he thought he could get however I'm gonna keep that silent because its not my business to be sharing. 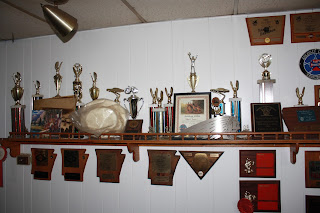 Just a few awards that he's received over the years. 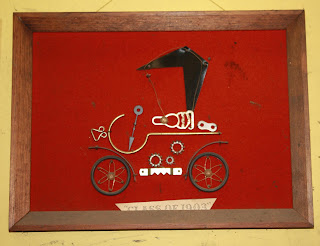 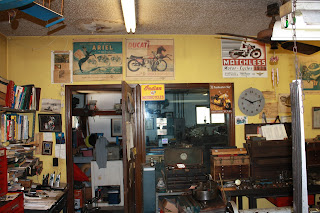 This is his shop.  I probably should've taken some more pictures of some of his older machinery but I didn't want to look like a picture-taking fool, but there is alot of stuff in this shop.  If you enlarge the photo and just sort of scan around you can get an idea of what it looks like on every square foot of this shop.  Stuff is everywhere up to the ceiling.  I think he told me once that there is like 80 tons of machines and tools in this little shop. 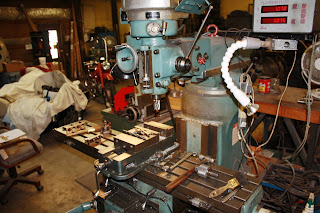 This is just a milling machine but it has cut some really unique parts for people all over the world. It has made quite a few MEECH custom parts along with the lathe sitting next to it.  People come to Bob from all over asking him to make BMW motorcycle parts and any others that they can't find.  Most of the stuff that he shows me I really have no idea of how original it is but its more original that a one-off custom bicycle frame.  It hurts me to say that but sometimes the truth hurts.  Did I mention that Bob plays the bagpipes?

I really wish I could get the video uploaded.  It only ran for a few seconds but it was really cool to see something run that had basically been pulled out of the grave and completely rebuilt to its original state from 108 years ago, it was probably even better.  I'll keep trying to get it on here.  I may post it on YouTube.