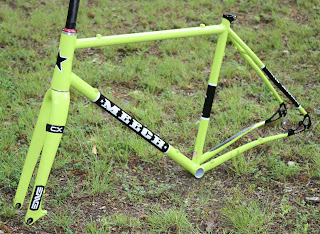 Alright,  I've had this frame hanging around in the shop for quite a while now and just never had time to get it painted.  Well, finally got it done.  This is the frame that I was building for myself when I was planning to ride my bicycle around the world.  "What? Ride around the world.  HA!  You can't even make it around the block."  Ok,  I'm kidding.  I never planned on riding around the world, never really wanted to, and don't have the time to, but, if I did decide to ride around the world this would probably be a good frame to do it on.  Steel main frame with  a Dedacciai tapered head tube, Paragon disc-brake dropouts, and an Enve carbon disc fork with tapered steerer of course.  This frame is like a big truck.  Its a little heavier than my average racing cross frame but the added weight is pretty balanced out.  Whenever you have a steel frame with a carbon fork the rear of the frame is gonna always be heavier, however in this case, there is added weight in both the steel, tapered-head tube and the carbon fork with disc tabs.  "How heavy is it?"  Well, this is a size 58cm frame (just happens to fit me) and it weighs 5.75 lbs as is, frame, uncut fork, and headset. It already has all the water-bottle bolts and seat pin in it also if you really want to get serious with your gram counting.  To put all weight worries aside, with the right components I believe you can still build this thing up into a sub-20 lb. cross bike.

I painted this thing Hot-Lime Green, similar to the Kawasaki KX motocross bikes just for the heck of it.  I have also seen some photos of a Cannondale cross bike that was painted in similar colors.  I wasn't really trying to copy anything in particular, I just had this color laying around and I decided to use it on something.  For some reason in these photos it doesn't look as 'hot-lime' as it really does.  I don't know what gives but I imagine it has to do with my photography skills.  After about 2 full days of rain, my yard and all the trees are so freakin green it looks like a rain forest, but even the grass is the photo doesn't look that green.  Anyway, trust me, its green.  Actually the paint job went really well for me.  No problems peeling the stencils off, the lines are all pretty well in tact, and overall I was really pleased as this was one of the harder paint schemes that I've done on my own.  Lets move on. 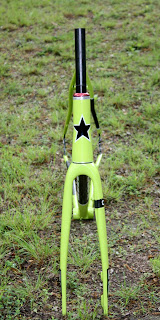 Here is a little front view for you.  The frame isn't sitting perfectly level here as you can see but we're gonna have to live with it.  I really do like the look of this tapered head tube.  They are a bit heavier but very nice.  I heard that someone else is coming out with one that supposedly is a little better but I haven't seen it yet. 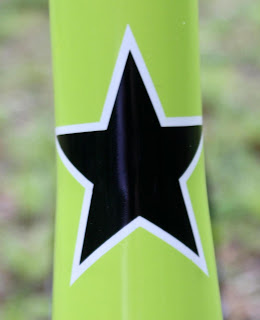 For some reason I'm always tilting the camera to one side.  If I don't pay close attention all my photos will end up leaning like this.  Even when I see a photo of myself I'm usually leaning my head to one side.  Oh well, I put this photo up because I was really happy with the way this two-color star turned out.  It will look even better with a custom head badge sitting right in the middle. 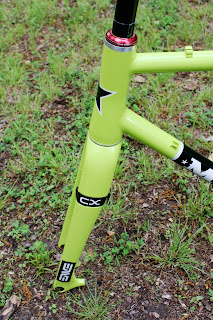 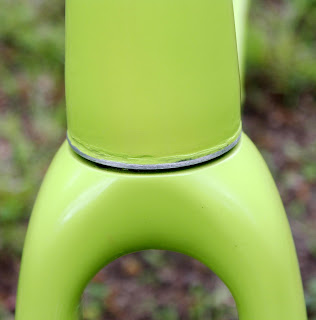 This was the only place that I was dissappointed with the paint job.  I tried to tape off the aluminum bearing cup and after the paint and clear had dried it became very hard to get off.  Anyway, some of the paint peeled off down to the primer and so I had to do a little touch up work.  Its not really noticed unless you look for it.  I tried everything to make it look better but the more I did the worse it looked so I finally just had to let it be.  A couple of years ago there was a video made about Richard Sachs.  I believe the title was "Imperfection is Perfection."  I'm not sure if that makes any sense but I like the sound of it now that I screwed up the paint on the bottom of this head tube.  There is another saying about "imperfection" that I found online apparently by Marilyn Monroe and it says:

Imperfection is beauty, madness is genius, and it's better to be absolutely ridiculous than absolutely boring.

I'm liking her more and more. 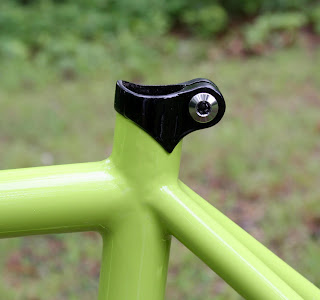 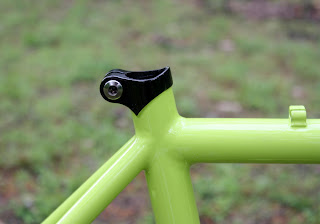 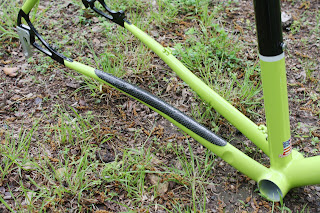 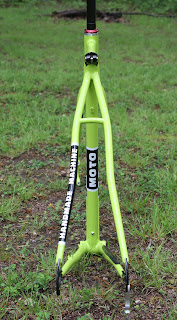 This is my favorite picture out of all of them. 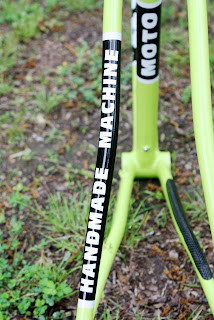 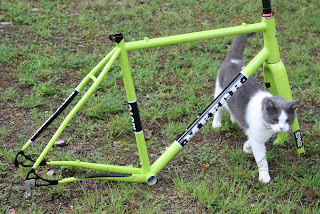 Look at Louis Maxximus "Soul-Katt" Jackson making a rare appearance.  The other night both Anne and I, as well as the neighbors, woke up to some awful racket outside like I've never heard.  It didn't sound like your typical catfight.  So I went outside about 4 a.m. and all I could see was a couple of raccoons walking across my neighbors backyard.  I couldn't find Louis and I thought that maybe he ended up on the wrong end of a bad fight.  Luckily he showed up a little later unscathed.  Only thing I can think of was maybe the raccoons were fighting, unless, is it possible that Louis whipped two raccoons hineys? Louis is smarter than I give him credit for.  There has been many times when i didn't think I would see him again only to have him just appear out of nowhere like a ghost.  Louis reminds me of the Clint Eastwood movie Pale Rider, I think thats the name of it.  I worry about my animals too much. 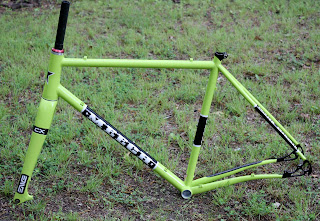 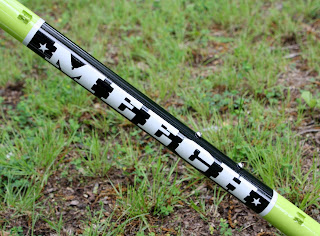 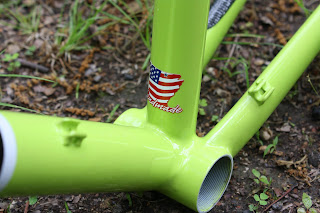 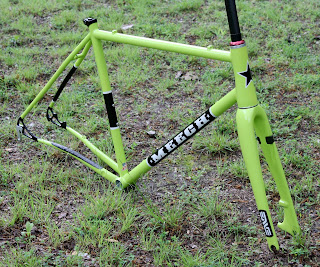