Just caught a quick product review on velonews.com of the new Bell Super helmet.  Helmets rarely get my attention and I'm bad about not wearing one on the road.  Basically the only time I wear one is when I race (not often) and when I ride with a group that doesn't permit/like when people don't have one on.  I've ridden without one for a long time and I'm just really comfortable without it and thats when i enjoy riding the most.  When I go ride, I'm only thinking about the ride and I don't think about crashing, of course thats no excuse, as crashes happen when you least expect it.  If someone would've told me that I would run into the back of a parked car that was sitting on an uphill overpass and put my head through the rear window while riding by myself I would've laughed in their face and said, "Pffff."  It happened so quick I couldn't believe it.  I must've been riding with my eyes closed.  I sometimes like to pretend I'm  blind and/or deaf.  I'm not trying to offend anyone here but sometimes I'm sure that I do.  The other day I was walking my dog Dizzy and we were on a long straight stretch that is pretty quite and i wondered how far I could go with my eyes closed just letting him pull me along.  We went about 20 yards before I ended up in someone's front yard.  I did it a couple more times because its kind of refreshing.  As far as pretending to be deaf, I'm pretty good at that because I can't hear good anyway.  I ignore most everything my boss says to me, I do what he says but I just don't acknowledge it, and I've got a really bad habit of saying "what" even though I probably heard what you said to me.  When I was a kid, my mother took me to get a hearing test because I said "what" so much to her.  My tests came back fine, so now she tells people that I only hear things that I want to hear.  I think it may be true.  Anyway back to this Super helmet. 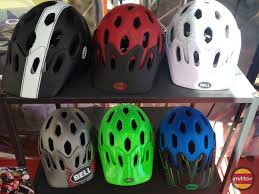 Even though i feel much more comfortable not wearing a helmet, don't think that I don't know that I could bump my head in a split second.  I've hit my head a handful of times in races and i was glad that I had a helmet on.  The other day while watching Paris-Roubaix I saw one of the riders crash and he bumped his head real hard, and yes, i cringed at the sight of it and thought, "Maybe I should start wearing a helmet."  I'm gonna be open and honest about why I don't where a helmet:

Reason #1   I'm much more comfortable without one and I think (in my head) that I can ride better when I'm the most comfortable.   Simple as that. You can say that its BS all you want but thats my reason.

Thats it in a nutshell. 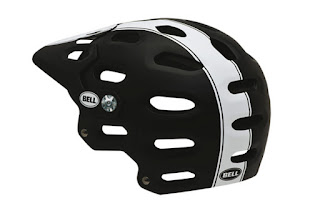 This helmet actually looks cool.  The first thing I thought about this helmet when I saw it was, "I might wear that on the road if you can remove the visor."  Well... 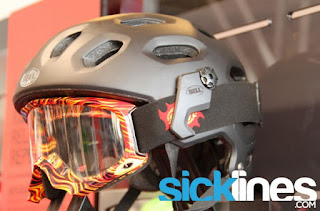 ....KAPOWWW!.  I love it, and I'm thinking about getting one.  Its not as cool as a cycling cap or a hair-net but its pretty darn cool.... 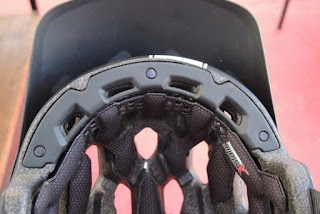 ....and looks like it would be a comfortable and well fitting lid.  They said in the review that is felt like it would stay on your head even if it wasn't locked.  It also comes with a Go-Pro camera attachment so the next time you see Bigfoot or a UFO you'll have some proof, you might even get on TV.  Whats not to like about that? 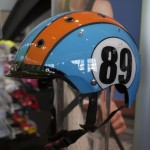 Of course this is my all-time favorite.  Now this helmet I would wear, and I'm thinking about getting a Bell Super and then custom painting it myself since I've recently been into painting stuff.  Custom bicycles with custom helmets, yeah, now we're rollin.

Just wanted to add that I always hope that we don't crash, but should we, I think we're safer with a helmet on.  I don't think they work in every situation but the handful of times that I hit my head on the pavement I was glad I had one on.  In regards to the incident where my head went through the rear glass of that Ford Taurus, I think my hard head punched right through it with a quick impact, kinda like a karate-man punching through a bunch of boards. I honestly don't think the helmet would have gone through, leaving me more vulnerable to a neck injury so I'm actually glad that I only had a cycling cap on for that one.

I've always wondered why so many people, especially motorcyclists, want to go helmetless.  Most people just say, "...because they're stupid and have a deathwish.", but I'm certain thats not the reason.  I know that some of them may actually be stupid but I'm pretty certain theres more to it than just stupidity.  So many types of people ride motorcycles all over the world and you can't tell me that every one of them that does not wear a helmet cannot be  intelligent.  It also amazes me that Arkansas used to have a helmet law for motorcyclists not too many years ago and that they did away with it.  How did that happen?  It was give or take around the same time that wearing seat belts became a law.  Both seat belts and helmets can save lifes so what gives.  I've actually thought (more like fretted) about what if they make wearing a helmet a law for cyclists.  Are they gonna make motorcyclists start wearing them again?  Who knows? I don't know if it has to do with comfort, freedom, personal tastes,  wanting to have the wind in your hair, or whatever, but lots of people don't like helmets.  Occassionally I'm reminded of my childhood.  Back then we just went outside and got on our bikes and did as many dangerous things as we could think of.  We rode trails, wheelies, jumped ramps, jumped ramps over each other, and any other crazy thing that we could think of.  We would put a ramp of plywood and a cinder block at the bottom of a hill, walk our bikes up the hill, rest for a couple of seconds, and then pedal back down as fast as we could go and hit the ramp.  We used to mark lines on the street with chalk so that we knew who jumped the furthest.  Good times, no helmet.  Back then those things didn't seem dangerous, they just seemed fun, and I think thats probably the way I still view this whole topic today. 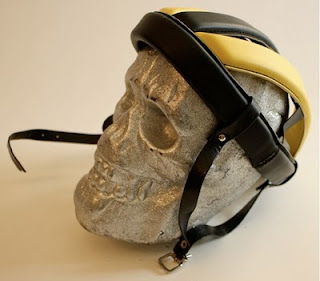