Its May already and that means its Giro time.  I can't believe its already here.  A cold front just moved into northwest Arkansas last night and its been cold, raining, and even a little freezing rain. Will somebody turn the Global Warming switch back on again, I'm freezing my arse.  The only time I've ever seen snow in May was actually coming back from the Yamaguchi frame building class.  I caught a ride with Judd, one of the other students, and his dog Rosco, who were both from Winter Park.  So anyway, that night we're driving into Winter Park and the snow is just coming down.  Judd, being much more accustomed to driving in those conditions, was cruising down those winding mountain passes much faster than this Arkansan was comfortable with. It wasn't just the fact that he was doing 55-60 mph down a snow-covered mountain, it was also his passing other cars on the way down, in the dark mind you.  He never missed a beat though so my hat is off to him. When we finally pulled into Winter Park the whole place was lit up with Christmas lights and covered in snow.  I felt like I had drifted back in time or something.  When the van finally stopped and I put my foot on solid ground (it was snowy and icey but felt solid enough) I breathed a sigh of relief.  I would much rather bust my arse on a slick parking lot versus driving off the edge of a mountain pass.  Ever seen the Tour stage where one of the racers goes over the side of the road and lands in a tree?  Actually it happened a couple of times within a year or two.  Nothing quite like riding your bike over the edge of a mountain, landing in the tree tops 30 down, climbing 30 feet back up onto the road, only to find your team car waiting there with another bicycle.  Judging by the look on the rider's face I imagine the conversation went something like:
Team Manager:  "You ok?"
Racer:  "Uhhh."
Team Manager:  "What were you thinking?"
Racer:  "Uhhh."
Team Manager:  "Here drink some water."
Racer:   "Uhhh. " (While choking and coughing)
Manager:  "Now hurry up, they're getting away."

Still want to be a pro bicycle racer? I think one year it may have been Johan Bruyneel.  Wonder what he's up to these days?  Pfff, who cares.  Anyway back to the bike race thing in Italy.  Apparently its some sort of big deal or something.  They usually have some real good coverage here.  I enjoy listening to them babble on in Italian even though I can't understand it. http://www.steephill.tv/giro-d-italia/ This is last year's champion,  uhhhh whoops, let's see here, wait just a second while I double check my notes.... 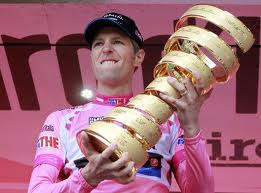 ...ok now, this is last year's champion, Ryder Hesjedal.  He was pretty solid last year but I'm gonna have to go with Vincenzo Nibali from the Cannondale squad.  I read that he's been working pretty hard for this year.  Whoa, I just had a mind lapse.  Nibali races for Astana now. Bet he's missing that Cannondale EVO. He'd never admit it but I know he does. Is Nibali even racing this year's Giro? Yeah, he is but i had to go check to make sure.  Thought for a moment he may just be waiting on the Tour.  I don't know if Roman Kreuziger is racing in it this year or not?  If so, I'd like to see him do well.  He always rides good when nobody has any expectations for him.  Some guys are like that.  Jan Ullrich was kind of like that.  That is one kooooooooool trophy that Hesjedal is holding.  Wish I had one of those sitting next to my Punt, Pass, and Kick trophy.  Yep, first place in the 12-13 yr. old class.  I was in the 6th grade and even beat out all the 7th graders as well.  I remember one of them called me a "weenie arm" during the sign up.  After it was over and they handed him his 2nd place trophy, I told him he could suck my "weenie arm."  I'm just kidding, I didn't say that. I was too shy to say anything like that, so I just took my gold and held it up with one hand and flipped everyone off with the other.  Talk about sweet revenge. ;) 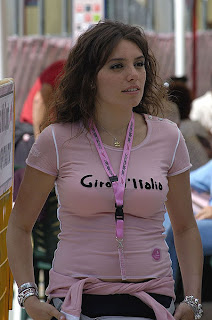 Uuummm, what? Huh? There is a bike race or something going on? Huh?  What are you babbling about? A giro?  I don't care.  Man, why didn't we have trophy girls like this in the Punt, Pass, and Kick.  I just got some spode from the Ford dealership that gave me my trophy along with some McDonald's coupons. He wasn't even wearing pink. I think I got ripped off. 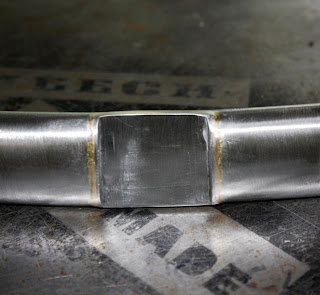 Here are a couple of pics of some of Friday's work.  I put a little custom chainring clearance in this chain stay.  I decided to go with the rectangle cutout instead of the oval on this one.  It takes a little less meat out. 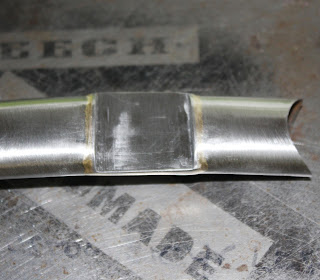 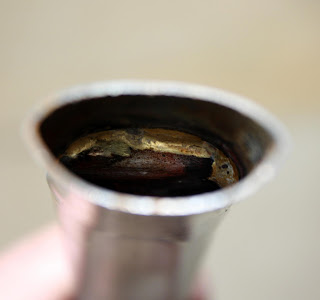 I got a nice little internal fillet on the inside of this piece.  Extra strength! 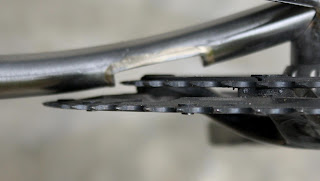 Perfect fit.  Campy Ultra-Torque cranks provide the least amount of clearance with these chain stays so if I can make them fit then I know most other brands will also.  This is actually a 53/39 tooth chainring setup, so thats why it is as tight as it is.  This is actually built for a cyclocross crankset and that will provide even more room.

Thanks for checking things out.  I just finished painting a frame the other day and am gonna throw some pictures up just as soon as I can.  There were a couple of spots on the clear that needed to be cleaned up and I haven't gotten it done yet.  It shouldn't be long.  Check back.
Ciao.

Note:  LC Creative Productions got a second gallery page up on my website.  Its got some frames that I didn't get on the first page and its got some of my latest frames as well, along with a couple of MEECH riders/racers.  If you get a chance go check it out.

Thanks to Linda and Hal of LC Creative Productions for taking care of me.  There is a link to my website on the blog's main page and here is another:
http://meechcustombicycles.com

Here is a quick clip of a young, skinny, Johan Bruyneel in the Tour.