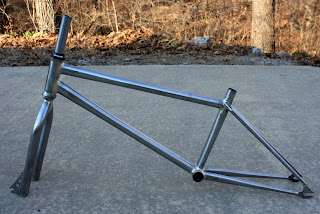 Alright.  I've been waiting for a long time to get this frame finished up.  "Is it finished?"  Ummm, well pretty much.  I still need to braze on some brake posts and I'm waiting until I get the brakes  to do that so I get everything positioned correctly and then I was gonna put a seat stay bridge in there today but i decided to wait because I wasn't sure if I wanted to go with something straight or curved.  Everything on the frame is kinda straight/angular so I'm probably gonna lean in that direction.  Regardless, it won't take long and I'm waiting until I get some parts in  before putting the finishing touches on it.  After spending this much time trying to get everything right I'm not about to just throw the last couple of pieces on just to be done, its gotta be right.  One day I'm gonna take this dude to a bike show, oh yeah, and I've already been checking out the landscape to pull off a jump for testing purposes.  My neighbor is a school bus driver so I'm thinking about asking him if I can borrow the school bus for a little Sunday afternoon jump, then on Monday morning when the kids start loading up there'll probably be a big caved in spot where I landed and then bounced off doing a 10' nosedive off the back of it.  "MEDIC!"  My mind isn't even from the same planet as my body is. In my mind, I'm going outside and wanna take my jet-pack down to the 7-Eleven for a Slurpee and a candy bar, meanwhile my body is going,  "You can't even walk down the stairs to get to your jet-pack."  I'm talking as if I own a jet-pack.  The main thing to remember when you're operating a jet-pack is to keep your head up so that you remain straight up and down, cause if you tilt your head down a little bit and hit that rocket trigger you're gonna end up doing some X-Games shit like Wile E. Coyote.  Next thing about jet-packing you want to have dialed in is make sure you have the carburetor jetted correctly, especially if you plan on jetting around at an altitude of 100 feet or more (...and who wouldn't, why would you even own a jet-pack if you weren't planning on flying high?).  You don't want it spitting and sputtering like the 2-stroke dirt bike of some novice motocross racer at the local backyard track.  You might even consider having it professionally tuned before going out rocketeering but I'll leave that up to you as I don't know what kind of mechanic you are. Lastly, a good thing to remember about jet-packing is to keep an eye on the fuel gauge.  If you're getting a bit low on fuel you might want to bring the altitude down around the 20 foot mark so that just in case you do run out you'll only end up with a couple of broken ankles and some skinned up elbows, but remember, when you're flying at these lower altitudes you need to keep an eye out for power lines, they can ruin a good jet-packing trip real quick.  Nothing quite like going out for a walk with the dog only to find some sky-surfer in a tank-top tangled and sizzling on some power lines while your dog is licking up the remains of a Slurpee and chewing on a flip-flop.  How many times, how many times, how many times have they told you, "Don't drink and drive!"?  Thats dumber than trying to give a rattlesnake a bath. ("Thats a strange analogy Dimitri."  Well maybe I have a story about giving a rattlesnake a bath.  Tune in tomorrow and see.) You can't fly a JET-Pack with one hand, that was the first rule in the instructions book.

1.)  Keep both hands on the controls at all times!

You f**cked up.  You decided to save a few bucks and opted for the model without the cup holder.  Good luck with that.  At the bistro they're always playing Elton John's "Rocket Man", you think I haven't thought about jet-packing a little bit.  When I die I want them to put me in a Sky-Cycle like the one Evel Knievel jumped the Snake River in and just light the fuse, don't even worry about giving me a parachute or any knee pads, heck, I might be up for that even if I'm not dead, but if I'm living  I want the knee pads.  Imagine how Travis Pastrana's face would light up if he woke up on Christmas and there was a JET-Pack under the tree.  Lets get back to this frame. 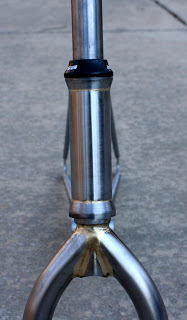 Little front end shot with the camera tilted as usual.  I always have to throw one of these photos in.  The integrated headset fits nice and snug.  I'm gonna get a different headset for it when I build it up but I had this FSA just laying around in the toolbox so I thought I'd throw it on. 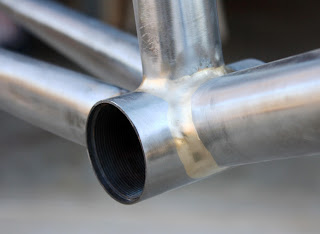 Ahh, just remembered that I forgot to face the bottom bracket.  Wait, I think I did already do it, its just been so long ago that I forgot.  I often wondered if I'd get this thing finished up but after a while it sort of became a mission and I was thinking that I would have to get this frame finished before I die in order to rest peacefully.  Technically its not done but I feel pretty good about it in the coming days.  God willing. 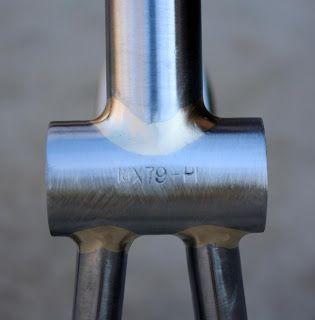 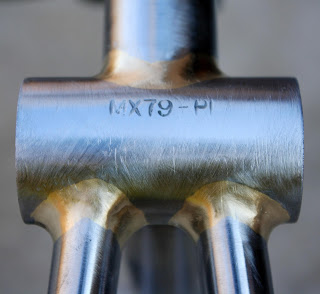 I just noticed a little spot I need to smooth out. 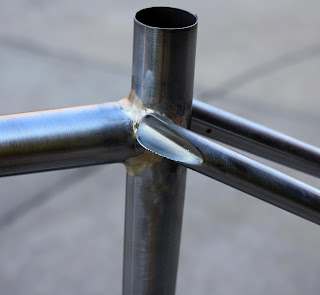 This wasn't the way I would've normally done the seat stays.  I would've put them on the back of the seat tube like I normally do but this is the way the old Schwinn Stings used to be so thats the direction I went. 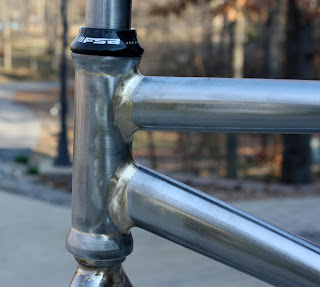 I do like the flared ends on the tubing.  It gives it a little extra something and I plan on using it on the next build as well.  If I had shown more of the top and down tubes in this photo you would be able to see it better. 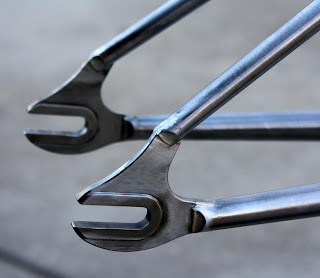 Paragon stainless track dropouts.  Not exactly the angle we were looking for as these are road dropouts but the stays butted up pretty well and there is still a little meat that can be taken out.  If I did this again I would have custom dropouts machined and would probably go with some fatter stays but this frame is so solid it doesn't even feel like a frame made out of tubes, it feels more like a solid piece of steel. 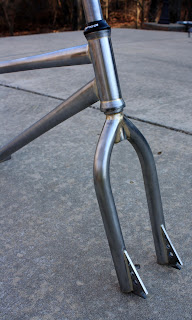 I like this shot as I like this fork alot.  This fork and I have become close friends over the past couple of weeks. 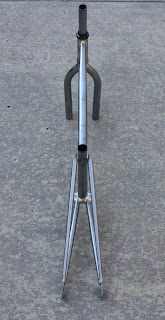 I like this shot alot also.  After seeing the frame from this angle and realizing the curve in the fork blades I may go ahead and use a curved seat stay bridge.  I think it'll look alright. 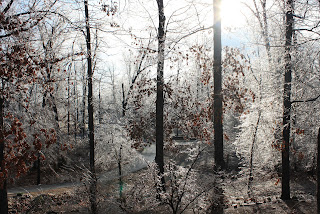 This photo was still on the camera when I uploaded the pictures.  We had a little ice pass through the other day but luckily it wasn't too bad.  I was hoping and praying we wouldn't get another dose like we did back in 08' or 09', whenever it was.  I don't care for ice, snow, or even cold weather for that matter.  Nothing like having to clean up broken trees off your rooftop, as if there's not enough stuff to do already.  My hat is off to all the people who live in areas where you have hard winters cause I'm just not made for it.  I would love it if it was 90+ degrees everyday.  San Diego would be nice however I'm not much into driving in traffic but you can probably live car-free pretty easily there.  When I was in Granada, Spain I really enjoyed walking or riding everywhere.  No car, no gas, no insurance, just walk or ride out the door and go wherever you're going.   Loved it.  Fortunately we're almost through the winter and daylight savings time is in a week or two so that gives us some extra daylight for a little after work spin or a little extra time in the shop or whatever you want to do. I can't wait.  I got a new road frame to start on next week and I'm ready.  The season is here and I want to get off this cross bike I've been riding since July and see how I really feel.  I've had even less time on the bike as I've had in the shop so I'm not expecting much but I'm ready to get into a little better shape.  Warm weather just helps my mentality.  I love just throwing on a chamois and short sleeve jersey and rolling.  Also ready to get my new shoes dialed in.  I'm wanting to try and get my body back up to speed and see if it can give my mind a run for its money.  "Are you kidding me?  Good luck with that."  Thanks for checking things out and sorry about the long absences.  I'm fixing to get the MEECH website updated with a new gallery or two but it will probably be a couple of weeks before its completely finished but its in the works, you got my word.  Vaya con Dios.
Guns N' Roses - Perfect Crime - Indiana '91  This is about the way I feel by the time winter ends.  I'm not sure if this is appropriate for a Sunday morning but if you never saw Axl in his prime this is a good example.  PED's?