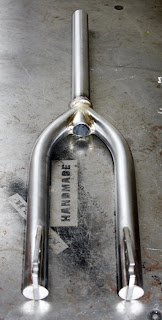 I've been out in the shop most of today trying to finish up this fork and I finally got it done.  I will still have to braze the threaded sleeve into the head tube later but I don't know exactly where I'm gonna cut the steerer tube off at so I thought it would be a good idea to wait till I have a stem before doing that number.  Measure twice, cut once. But anyway the fork is done and I threw a wheel in it for a quick check and its perfectly straight.  I was truly relieved because this fork was built mainly from my eye than anything else as my fork jig didn't want to accommodate this setup.  The only time I used the jig at all was to hold the dropouts on the fork blades while tacking them in place. 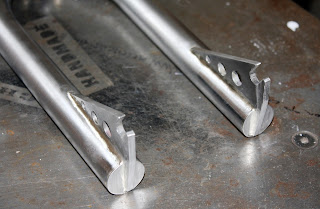 Instead of just brazing some dropouts on the fork legs I had Bob cut a little 90 degree ledge on them so that they fit on and under the fork blade.  Just a little added safety since this is my first BMX project and I wanted to be all sure that everything stays in place as it should.  I brazed them on with a nickel-silver rod instead of a bronze brazing rod as the caps on the bottom of the fork legs are made out of stainless.  Bronze and stainless don't mate well but the nickel-silver is very similar, it melts at roughly the same temp and you even use the same flux.  I could fillet-braze a stainless steel frame if I wanted to and I've thought about it on occasion but just haven't pursued it for lack of interest in stainless and more interest in carbon,  which hasn't really been getting much attention here lately.  However, my carbon dreams haven't died yet.  Never say die. 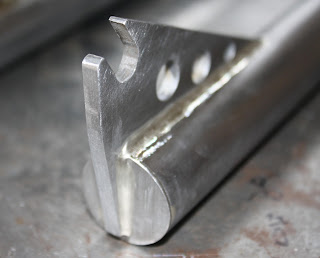 Yes, I like it. Thanks for cutting the dropouts Bob. 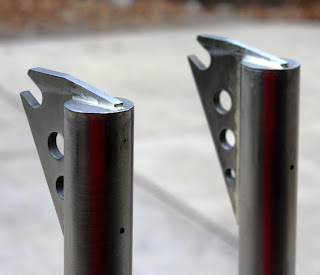 Brazed for a lifetime of punishment.  This fork is so solid.  I took a fork blade in each hand and tried to force them apart and couldn't budge them, I'm not exactly Hercules though.  Regardless, this is by far the stiffest fork I've ever built.  Solid steel! 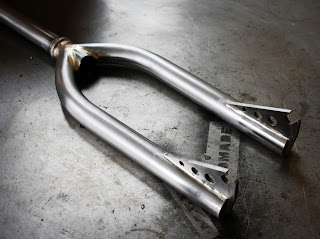 This may not look like much but it is the nicest fork I've ever built.  So much time and effort getting everything perfect since the jig really was no help.  Talk about measuring twice, try measuring so much that you forget what it was supposed to be in the first place and then you have to start over measuring.  There was no stone unturned in making this piece.  Its quite the relief to be done with it as this was actually harder to get right than the frame was. Now I need to do the cleanup on the frame.  I had planned on doing them both today but since I didn't get this done until like 2:30 the frame is gonna have to wait till the weekend. The weather should be a little better then and it will be much more enjoyable.  The shop was a comfy 35 degrees today as I had the garage door up and was basically outside. I hate working inside with the door shut because the noise can't escape, I'd rather freeze.  You'd think it would be the other way around as I don't hear that well. Normally I only work like that if the temp is above 40 but today I just decided to tough it out.  Its not that big a deal actually because people are working outside in it all day long.  A winter storm is supposed to be moving in tonight but I'm hoping it won't be as bad as they are predicting.  Fingers are  crossed.  The first frame I ever built for a customer was during the ice storm of 2008 and I don't think the temperature got out of the 20's for over a week after that. The power was out at our house for nine days but luckily my mom's power got turned on after only two so you can guess where we went.  I've got to put in a couple of days at the bistro but hopefully the frame will be finished up this weekend.  Now I'm gonna go and try to put in an hour ride to stretch a bit but I'm having to force myself to do it.  Oh well, I'll feel better afterwards. Salud!