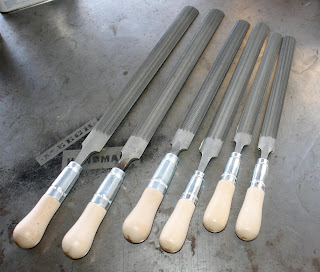 Just opened up this package yesterday.  A frame builder's dream come true, all new files and handles.  I've been needing new files for like a year now, probably longer however I just kept grinding it out and making them work.  I'm almost embarrassed to say that this is really the first set of new files I've gotten in the 4 1/2 yrs. that I've been building frames.  I knew nothing about files when I started building and so I started off with three files, a 10",12", and a 14".  I didn't even know that there were files with different coarseness and so I built probably my first 15 frames with a set of second cut files.  Geez, the pain I've caused myself.  So after a year or so passed and I discovered there were different cutting grades I purchased a set of 3 bastard files or first cut and I've been using those 6 files every since until this day.  Now granted, I've purchased a few other files from time to time, small files, round files, etc., but for the best part of 4 1/2 yrs. of building bikes I've used the same six files.  One of the highlights was when I first moved to Mountain Home. I still had not been building a full year and on one particular frame I was having some problems and I got my friend Bob Davis to come over and give me a hand.  Bob is 83 yrs. old and has a machine shop full of over 100 files just laying around all over the place, not to mention thousands of tools that I don't even know what they do.  So anyway, he is sitting down with a cup of coffee and I'm filing on a tube all the way across the garage when he said, "We're gonna be here a while because that file has seen some wear."  Then I told him it was less than a year old and he looked at me with a puzzled look and said, "Yeah, but whoever had it before you used the dickens out of it."  And then I says, "I bought this one new."  And the conversation ended with him looking at me and just shaking his head in disbelief.  It felt kinda good inside to have impressed an old-timer like him. 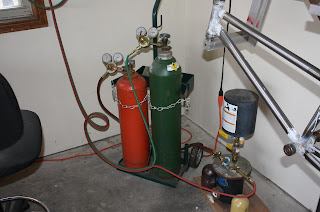 These first two pictures of the files and this torch are the main part of most frame builders business, steel frame builders that is.  This little torch and the files have been probably my favorite purchase of my entire life.  I truly enjoy building a handmade bicycle frame and watching someone go riding or racing on it.  Incredible feeling for me.  I love it.  Ok, a jig is a necessity if you plan on building many frames but lots of people have built their own jigs for minimal cost.  I purchased a Bringheli right off the bat because I was planning on building more than a couple.  The jig is a worthwhile investment and if you no longer want it you can probably get most of your money back if you decide to sell it.  I don't think I'll ever sell mine though.  When I die you all can put my ashes in a bicycle frame, seal it up with some nice fillets, and then ride me for thousands of miles.  Ok, I'm officially drifting now.  Lets get back to the present.  Bicycles are great though aren't they?  They have been a huge part of my life. 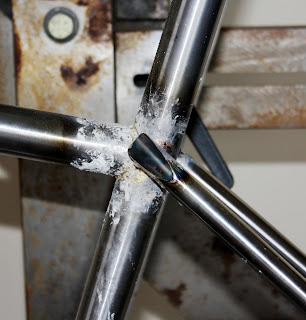 Seat stays are tacked and in place and that means the frame is all together now and is ready for some of the finishing touches.  Still have some work to do but its all on the downhill. 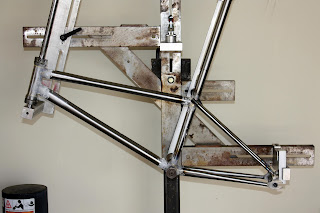 Thanks for checking things out.  Its Superbowl Sunday and I could care less who wins as I don't like either team in it, but I'm sure its big day for them so I hope its a good one.  Chao amigos.