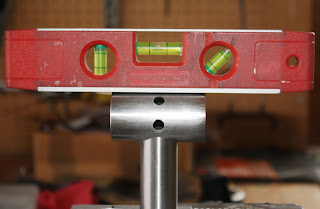 Got a little start on my next customer's frame.  Steve is out of Oklahoma and I'm building him a road racing frame.  He made a quick trip to Mountain Home a couple of weekends ago and we took a few measurements for his new bike this spring.  This is gonna be a pretty straightforward build, tight and light.  Its gonna be roughly a 54/55 cm frame, lets call it
54.5 cm, and we're gonna use a sloping top tube to keep it tight, and a top of the line Easton carbon fork to make it light. 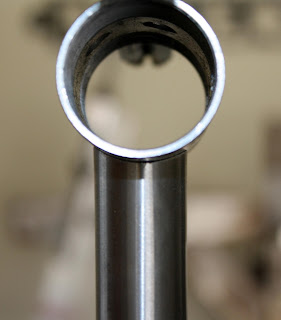 As always, I start every build with a good foundation.  Sometimes I imagine you guys can get pretty bored with some of these photos that are all similar from build to build however I do it so that the customers can see whats going on with their frame.  Some people may or may not care about seeing this stuff but I do it to show them the work ethic that goes into each and every frame that I build, and it also gives a little subject matter to blog about.  It would seem pretty boring if all I did was post pictures of finished painted frames and it would be abot a month in between each post.  Sometimes thats about what it feels like now.  You can paint a house to look nice from the outside but for myself, I prefer to know that its well constructed under the paint and thats why I post these photos. 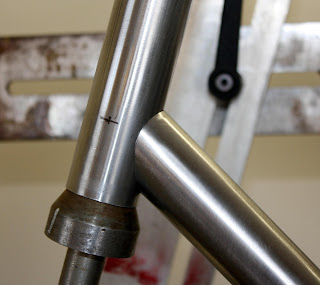 I'm ovalizing the tubes on the main triangle like I did on the BMX build.  This frame has an OX Platinum down tube that I made bi-oval, more tall and narrow at the head tube and wider at the bottom bracket just like the S3 down tubes. The top tube is ovalized at the head tube junction, and the seat tube is ovalized at the bottom bracket.  This OX Platinum down tube is actually lighter than the S3 by a few grams because the S3 down tubes are larger diameter.  The OX is butted 7/4/7 which is super-light but with a little more meat on the ends for brazing.  I love this down tube and use it on almost every build unless its a really big rider that needs something meatier.  I have used this down tube on frames for riders up to 225 lbs. and have never heard any complaints about the frame not being stiff enough.  If they're over the 225 mark I would probably go with an 8/5/8 and maybe a bit larger diameter.  No worries with this frame though as the rider is a comfy 175-180 lbs. 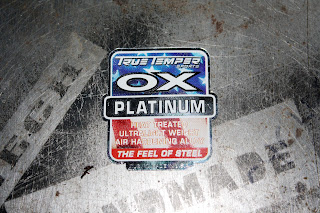 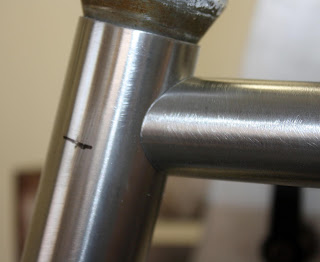 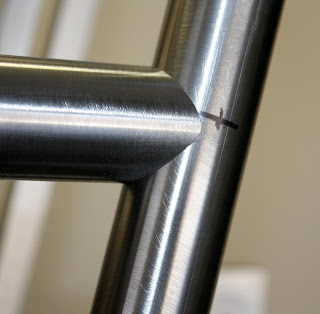 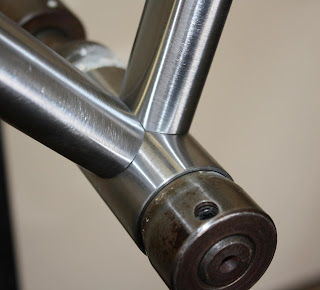 You can kinda see the ovalization here but its a bit difficult. 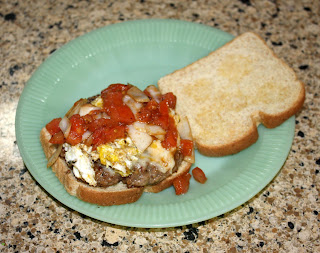 This was lunch that day.  It was pretty cold that day and I threw everything I could find on top of this burger.  Cheese, sauteed tomatos and onions, and a fried scrambled egg on garlic toast.  Here lately I've been trying to add a couple of pounds to my frame.  Since being sick a couple of weeks ago I've been down a bit.  I burn more calories running around the bistro than I do on my bike.  Anyway, I'm about there.  I don't have a strict diet but I do try to eat decent foods for lunch and dinner and then there is always some sort of dessert thrown in there.  Anne says I'm addicted to sugar and its probably true.  I was doing pretty good for a couple of days but then yesterday I popped and ate almost an entire box of Little Debbie Swiss Cake Rolls on the way home from the store. Why do those things seem to just melt in my mouth? We only live about 3 miles from Wal-Mart and I opened the first package before putting the car in drive.  I had 5 out of 6 packages eaten before I got to our neighborhood road.  That means I ate roughly 10 Swiss Cakes in 2 miles, thats 5 a mile while also having to open them.  I just left the last pack on the truck seat.  I think I may go get it now.  Be back in a second.

FACT:  I can eat a McDonald's Fillet-O-Fish in two bites.  I can actually shove the whole sandwich in my mouth but then I can't chew and the 911 operator can't understand me while I'm choking.  I think it was last winter when I about choked to death on a peanut butter sandwich.  True story.  I was out in the shop working on a cold day and came in for a few calories so I made a quick peanut butter sandwich.  Now my mother says that her doctor told her that she has a condition where her esophagus shrinks and she has trouble swallowing sometimes if she doesn't eat slowly enough.  I may have something like that but I really think my problem is that sometimes I just try to swallow too much food without chewing it up.  I do that when I'm in a hurry, especially when I'm driving (not good).  So anyway, I was taking a little lunch break in front of the computer while shoving this peanut butter sandwich in my face.  Well, you don't really feel the food backing up in there until its already backed up.  By the time you know its not going down chances are that you've already eaten a couple more bites and now thats not going anywhere either.  Some foods go down better than others, peanut butter and bread is the worst. So it got bad enough that I went into the bathroom and was gonna try and get this thing up out of my esophagus since it clearly wasn't going down.  No luck.  Wouldn't go down and wouldn't come up.  "What do I do now?"  Well, I grabbed a glass of water and decided I would try to wash it down. Believe it or not, I was actually still very calm at this point as I've had this happen a number of times in the past but this time that big gulp of water put me into a spot of bother, I began to choke.  This was the first time I've ever been choked up this bad.  I started losing my breath, and yes, now I'm beginning to lose my cool, actually the cool was all gone at this point and panic was setting in as I'm bouncing around the bathroom thinking, "Please don't let it end like this."  There was no one around, no one except for Pinky, our little Shih-Tzu.  After hearing all the commotion I guess he decided to come in there and see what was up.  I looked down at him through my heavily watering eyes and he was wagging his tail as if I was playing some sort of game.  He was probably thinking that I was playing that game, you know the one, where you give your dog peanut butter and watch him try to get it off the roof of his mouth.  He probably thought, "Yeah, how you like this game now cowboy, its real fun isn't it?"  Well, finally a big gasp and a big cough sent it flying out and as I looked at myself in the mirrow, a little frazzled I might add, I told myself I was gonna slow things down, maybe try to eat a little more like the French people do.  Ok, thats pushing but i do try to take a little more time chewing than I used to.  I still get in a hurry sometimes but I'm trying to keep it out of the bathroom if you know what I mean. 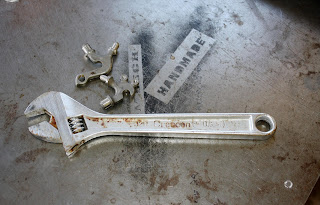 I was doing a ride the other day and this 12" Crescent was on the side of the road.  I stopped and went back hoping that it was a cheap Chinese made tool and I would just leave it there for someone else but unfortunately it said, "The Original Crescent", made in the U.S.A.  Well, I couldn't just leave it.  I already have a 12" crescent wrench but I think its one of the cheap Chinese ones so this was an upgrade.  These type tools don't carry well in the jersey pocket as they bounce all over the place when you get out of the saddle, they weigh about 6 lbs., ok, a pound and a half, but its a heavy pound and a half.  Luckily I was only about 30 minutes away. Its the closest that I've gotten to suffering on the bike in quite a while.  Hopefully I'll get the rear end finished up on Tuesday.  I got a new schedule at work so now I have 3 uninterrupted days to get some frame building done.  This should help things out quite a bit.  Thanks for stopping by.  Chao.