Yancey on the Move 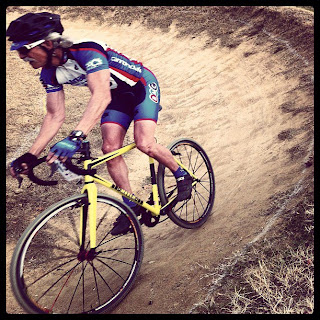 Here is a shot of Yancey at a cross race this past weekend in Fayetteville.  He and his teammates from BMC had their annual training camp ride on Saturday and then with a cross race happening on Sunday there was no way LY was gonna pass that up.  Larry would rather take a beating than miss a race.  Anyway, the promoter managed to work the BMX course into the cross course and so I'm sure it made for an interesting ride.  I believe Yancey finished a solid fourth overall.  Branton Moore was also racing his MEECH right alongside of Yancey.  It was his first ride back on the MEECH since we fixed his seat post and he said everything felt solid.  I'm lucky to have such cool guys out there racing on my bikes.  If I ever when the lottery I will pay you guys a couple hundred thousand a year just to race my bike.  Its a huge thrill for me to see you guys out there sporting the MEECH logo.  Thanks for the hard efforts.

Also, I'm not sure who gets credit for this photo.  I stole it off the Arkansas Outside's FB page.  So anyway, to whomever this photo belongs I thank you for taking it and I give the full credit to you.  Nice shot man!