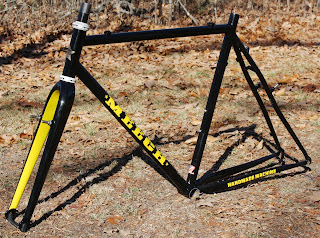 Here are a couple of pics of Larry's backup frame that I've had for way too long.  This is the frame he raced at the World Cross Championships last year and it wasn't even painted for that.  We just sprayed the name on it and clear-coated it.  It doesn't take very long to chip the clear and then its only about 24 hours before the surface rust starts to set in.  So anyway, I just completely stripped it and decided to give it a go myself the other day when it was warm enough out in the storage shed behind the house.  Everything went pretty smooth so I thought, then after shooting the clear and taking it out into the light I realized I had some yellow that wasn't completely covered. So I had to let everything cure for a couple of days and then go back and scuff all the clear and then I taped off all the logos as I didn't want to have to redo everything to reshoot the black and then of course clear it again.  No problem except that then the cold weather came back.  Luckily I found a guy in town who is gonna let me rent his paint booth out a couple of times a month in order to get some of my painting done.  I had a brand new spray gun that I bought on closeout last year and so I packed everything up and went over to his shop the other day and gave it a go.  Painting with an actual spray gun in a real booth is so much better than how I was doing it before.  The gun sprays so much smoother and is so much easier to control the flow.  You have to really screw up to get a run in the paint and clearing is much better also because the mist is finer, however there was one spot on the left chain stay that needed a little better coverage but it wasn't bad for the first attempt. It is a race bike and Larry would probably knock that much clear off of it in the first corner.  I wasn't 100% comfortable since it was my first time in this guys shop and there were a bunch of old-timers eating lunch and watching me through the window but it turned out ok.  I didn't strain the clear coat since I never had before and it had something in it  that I kinda had to buff out, but lesson learned and I'm ready for the next one.

The fork turned out pretty nice on the first attempt so I didn't have to reshoot that and that was nice.

Its not hot-pink but its MOTO. 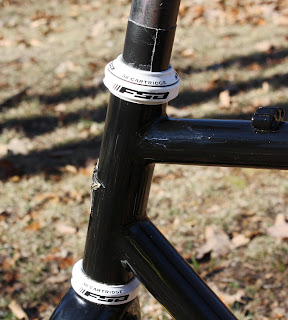 I like the contrast of the white headset against the black and yellow.  Here lately I've been into things that don't necessarily go together instead of just trying to make everything match.  Its kind of the same way when I'm dressing myself.  An old friend described me once as 'retro-give-a-f**k'.  Thats one description. 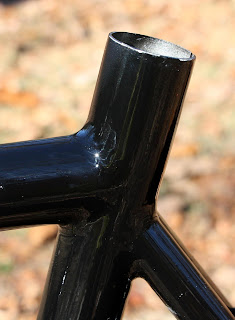 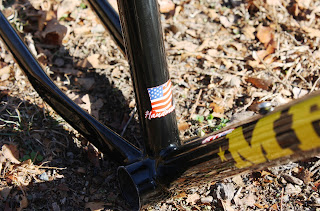 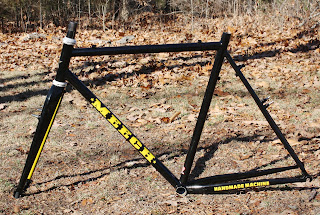 Since the other frame is yellow with black we decided to go with the opposite on this one.  Should make for a pretty nice contrast in the pits. 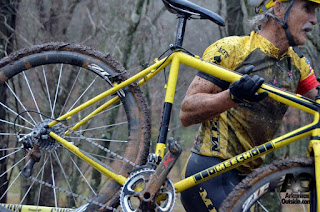 Finally dug up a good photo of Yancey at the Arkansas State Cross Championships.  This is a good photo however I prefer the photos where they are actually riding the bikes and not carrying them.  I understand cross racing but carrying a bicycle just doesn't seem right to me.  I'm glad yall are doing it and not me. I'll keep building them if you all will keep racing them.  Anyway, congrats on winning your race Larry and now you don't have to worry about having a backup at World's.  After finishing this frame up and also about to get started on Matt's Schwinn Sting replica I'm starting to feel like a frame builder again.  Man, there for a while I was wondering when I was gonna get it together.  Not sure I have everything dialed in quite like I want but I'm getting closer.  I think after I get the holidays behind me I should be able to get focused.  Maybe  I'll get the website updated a bit and kick things back into gear.    Now if only I could begin to feel like a cyclist again.  I'm gonna try to get a short ride in this afternoon.  Hope you all do as well.  Chao.