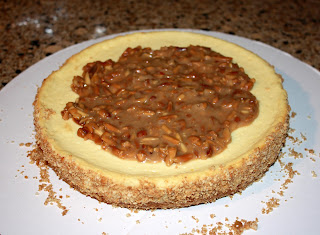 I've been really excited here lately since the world is gonna end here in a bit. I've needed something to break up the monotony.  I also need some time off work to get some stuff done so this end of the world thing is working out for me. I thought I'd get in one more post just to say adios to everyone.  On second thought why would I do that, we'll all be going to the same place I imagine.  I hope its warm there, but not too warm if you know what I mean.  I prefer lower 90's all day long and 60's at night if anyone is asking. The weather here lately has been really nice in Arkansas for late December, mainly in the mid 60s during the day.  Great riding weather.  Last night a storm blew in and it got cold real quick and the wind has been ripping all day long gusting between 30-40 mph. Its only fitting that the wind is gonna blow really hard at the end of time.  Even though I had the afternoon off I didn't even attempt to ride.  There was a time I would've given it a dig but that time has passed now.  For some reason last night I stayed up and made a cheesecake for the people at work.  A bunch of people brought all sorts of candy and cookies and I ate most of of it by myself so I figured I would try and give back a little.  I used to make cheesecakes all the time when I worked at the Country Club, and then later I had a little bakery/chocolate shop called The Chocolate Bar for about a year.  I ended up renting it out and going back to school.  It was fun but I didn't want to do it for the rest of my life, besides I was eating all the profits. My two favorite desserts to make are cheesecake and baklava.  I thought about making a baklava but since its supposed to be the end of the world and all I decided I wanted to take a few extra calories with me.  I figured I might be traveling for a while.  This is an Almond Praline Cheesecake and I took it to work thinking that maybe they could cut it up and give a slice to everyone that worked there but the boss just took it and said, "Thanks" and then put it in the cooler.  I was a bit puzzled because not only did I want him to try it and tell me how it tasted I also wanted a piece for myself as I don't make them that often anymore and I haven't had any good cheesecake for a while now.  Oh well, I can make another for myself but I was mainly worried that all the other workers might think that I just made this for the boss to get on his good side.  I didn't do that at all, like I said before I wanted everyone to get a slice, myself included, especially myself.  Ahh, piss on it.  If its still there tomorrow I may steal it back and when he asked me what happened I'll just play dumb and point at the chunky guy.  I hope he doesn't read this blog, he might pulverize me tomorrow, the chunky guy that is.  I like him though, he's cool.  I'll make him a cheesecake to keep myself outta trouble. 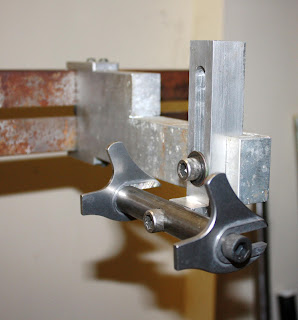 My frame building has slowed a bit here lately as I've mentioned before but after I get the holidays behind me I got a new project to work on that I have already got a little start on.  Its a replica of the older Schwinn Sting BMXers.  Its gonna be pretty interesting and I've already had to make some changes to the old Bringheli.  BMX frames have a bottom bracket height instead of a bottom bracket drop so the bb center is roughly 2 inches higher than the axle center.  Not only that but the hub width on this frame is only 110 mm.  So I took everything over to my good friend Bob Davis and he made me the dummy axle as well as this little addition to my jig.  It turned out perfect and I couldn't be happier.  I don't know how many BMX frames I will build in the future but I'm set up now.  He does excellent work and is a very interesting person to talk to so I always like having to go over there.  I've talked about him several times and I've even posted some pics of his custom motorcycles.  Thanks Bob. 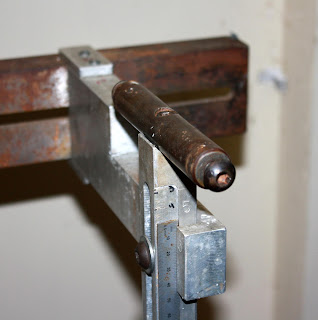 Here is the 'before' shot of the Bringheli.  You would think that you could just turn this piece upside down and you'd be set but it didn't work out that easy.  The dummy axle was too close to the main mounting piece and it wouldn't allow the dropouts to fit properly.  Its all water under the bridge now.  I should be getting a start on things right after Christmas, if we're still here on Earth.  Hah.  I'm only 45 years old right now but I can remember a handfull of times that the world was supposed to end and it didn't.  The first time I was just a kid in grade school and I remember that the planets were supposed to be aligning and the gravitational pull was supposed to pull the Earth apart or something.  I was scared but then I woke up and had a cup of coffee and life went on.  I started drinking coffee really young.  My dad taught me how to make his coffee when i was like 6 yrs. old so that he wouldn't have to.  I can remember having to jump up on the counter in order to get the coffee out of the cabinet.  He also taught me how to make oyster stew when i was probably only 8 or 9 yrs. old.  Same story, he figured that if he could teach me how to do the things that took up his time then he would still get what he wanted and have the time to relax.  I'm not complaining because it was all educational.  I spent most of my early years working for my father and I owe most everything I have to him and my mother, and, I still eat oyster stew quite a bit during the winter so it was worthwhile.

I think I drifted off the subject a bit.  I'm not even sure this post has a particular subject.  Oh yeah, the 'end of time' predicted by the Mayans.  I wouldn't worry too much about it.  The Mayans didn't even see the Spanish coming so I doubt they have the power to predict the end of the world.  There was only one smart Mayan amongst their civilization and that was the one that stopped making the calendar.  He probably figured out that he wasn't gonna live many more years and said, "Screw this bs, I'm outta here.  I'm going ridin." Either that or he got killed by the Conquistadors. History books will tell you that Christopher Columbus discovered America but if there are any indians left out there they will tell you that he destroyed America.  And there's one other pretty solid clue that the world is not gonna end tomorrow, its already tomorrow in Australia.  I heard that on World News Tonight a little while ago.  It would be funny if the world just went 'pooof' like some sort of old, stale firework except for the fact that I didn't get a piece of that damn cheesecake.  Unbelievable.