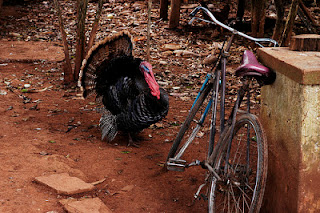 Alright, just wanted to take a moment and wish everyone a Happy Thanksgiving.  I had no pictures of my own to share at the moment but I didn't want to just write Happy Thanksgiving cause that would be lame.  So what did I do?  I googled "turkey bicycle" to see what would come up and this is what I got, along with a bunch of photos of people riding bicycles in Turkey.  So up above is the first photo.  Not bad.  We have a good looking turkey(is that what they call a Tom turkey?), he's pretty well buffed, standing along side of a nice looking steel bicycle, that if you put a racing saddle on and raised it a bit, threw some drop bars on it, and added some of your favorite pedals, you might make it through a cross race or two.  Its possible, you don't know, you might.  I also can't help but to get a little turned on just by looking at that prime terrain.  Kind of a loamy hardpack if there ever was such a thing.  Thats MX lingo. Looks a little like what I used to race on in the Georgia Dome. I never saw any turkeys hangin out around the Georgia Dome though. Saw a lot of bums and bag ladies that said they could do lots of talented things for a dollar.  "You'll do what 'toothless bag-lady wearing five sweaters and three toboggans'?  Is that why you cut the fingers out of your gloves?"  After reading this you are all gonna be thankful for something, I guarantee it, even if you only have one tooth.  So anyway,  what do you think happens in this turkey-bicycle picture here? 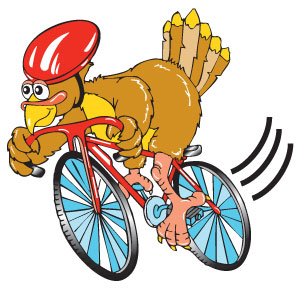 Does the buffed turkey grab the bike and put his turkey legs to good use and make a smooth get away before the ax gets him, or... 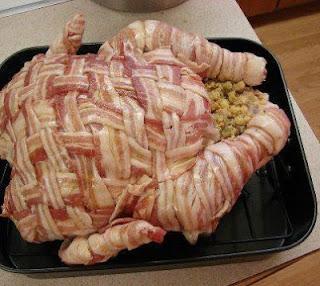 ...did he ever even learn to ride a bicycle in the first place when he was just a young gobbler?  Apparently this turkey here never learned to ride a bike and ended up like this.  I think this is more of a pig than a turkey.  I don't know but I bet it sure taste good.  I'm getting hungry now.  Nice job of weaving the bacon. Thats kind of a 3k Bacon weave on that frame. The hidden skills of some people never ceases to amaze huh?  Now just coat it with some high-end epoxy and you'll have one of the stiffest riding birds in the peloton.   Why did the thought of racing ostriches just come to my mind?  I prefer cantilever brakes on my cross bike but I think if I raced ostriches I would probably go with disc brakes on both of his ankles.  Talk about face-planting. In one of my older post, probably like 3 years ago, I was talking about MEECHcross racing, and I believe I said that I would start the race out by shooting a flaming turkey out of a giant slingshot.  Where do I come up with these ideas?  Don't worry, the turkey would not be alive and on fire, at least not for long anyway.  Although, to be more of a  humanitarian I could just launch a live turkey out of the giant slingshot and then he could just proceed to fly on and everyone could applaud the free-stylin pardoned turkey, without the fire of course. I wonder why chickens never get pardoned?  I mean chickens get eaten everyday whereas the turkey only has to escape the holiday a couple of times a year.  Imagine how a chicken would feel if he got bought for a Thanksgiving dinner.  He'd be like, "WTF MAN, I GET ONE STINKIN DAY OUTTA THE YEAR THAT I DON'T HAVE TO COVER MY ARSE TO KEEP SOME CLOWN FROM CHOPPING OFF MY HEAD AND YOU UP AND DECIDE THAT YOU DON'T LIKE TURKEY, WELL HOW BOUT YOU LEARN TO LIKE IT JACKASS!  FOR PETE"S SAKE MAN!  WHAT ABOUT HAM or STEAK, or EAT SOME DAMN FISH FOR CRYIN OUT LOUD!  CAN'T I JUST REST FOR ONE FREAKIN DAY AND TRY TO ENJOY WATCHING SOME FOOTBALL WITHOUT SOME CORN NUT  TRYING TO KILL ME?"

Happy Thanksgiving everyone.  Hope you get the opportunity to get in some miles on the bike, and that you can ride faster than this turkey did. That may be a chicken under all that bacon, who knows?  Rock 'n' Roll.