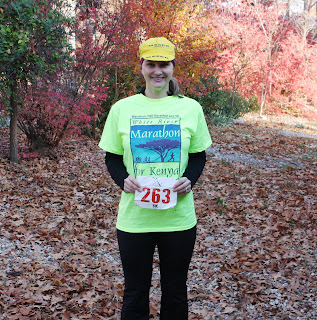 Anne did the White River 5k run for charity on Saturday morning.  They actually had a full marathon and a half marathon as well to benefit a charity for the people of Kenya.  The marathon was a qualifier for the Boston Marathon and they had a pretty good turnout.  It was pretty cold (felt real cold to me, low 30's at start time) and foggy but it didn't phase her and she went out there and knocked it out.  She was just about talked into doing the half marathon a couple of weeks earlier but after realizing that trying to run 13 miles with only a few days training is not a good idea she opted for the 5K.  Anne and I aren't runners, me especially, but she went out on a couple of 8-10 mile runs on a moments notice to try and get ready and then when she found out there was a 5k as well she decided to play it smart.  So we woke up early got her to the start line and after 30 minutes we were back in the car ready to get back in a warm bed.  Runners are crazy people.  Right before the start I had a little deja vu when Anne said to me, "Why am I doing this?"  And I reminded her it was for charity and she said. "Alright."  It reminded me of myself back when I was racing bicycles.  I always hated early starts and lots of times I would say to myself, "What am I doing here?"  I guess its for the love of racing, or charity.  One of the sponsors for this event was Christ Community Church which just finished being built inside the mall next to the bistro where i work.  I kinda got to know the minister there, Brother David, as he comes in to eat pretty regularly.  Anyway, he and some of his colleagues go to Kenya about once a year in order to help out in certain areas where the people are less fortunate.  The organization is World Vision and they are stationed all over the world trying to help out impoverished nations.  Anne and I may never go to Africa as missionaries but we are gonna sponsor one of the kids over there.  I was always a bit skeptical about sending money to these organizations as I always thought that the money would end up in the wrong hands, however after checking World Vision out I felt confident enough to give it a shot for a year and see how it goes.  There are plenty of people and animals that need a little help right here locally but I guess theres nothing wrong with trying to reach out a little and make a difference.  Hopefully it helps someone out that is in need.  I'm going into it with a positive attitude.  Maybe one day I'll get a MEECH frame on the African continent.  Ever watch the Tour of Africa on TV?  Its a trip.  Not exactly the Tour de France.  Those guys are racing on whatever they can find.  I saw one guys crank just fall completely off.  There was no team car or anything to help.  He had to fix his own bike to finish the race.  And then another guy was off the front solo when a tiger just ambushed him and dragged him off his bike and into the bush.  Ok, I'm pulling your leg a little now but it is Africa. 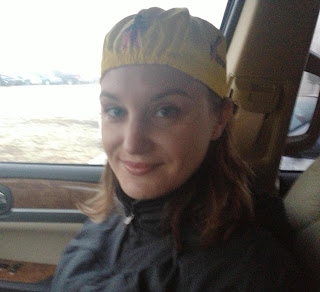 Here she is trying to stay warm before the start.  You can tell she is just so excited about getting to run at 7 o'clock in the morning in 30 degree foggy weather.  Its always cold and damp down by the White River even on hot summer mornings so I was glad I wasn't doing it.  Good job baby, when is the next one? I'll drive you there.  Check out the sweet cap she's wearing.  Whats that say? 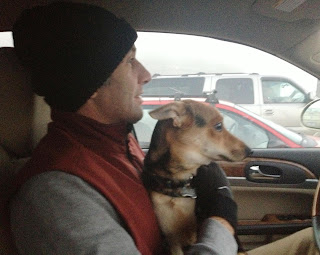 We took Dizzy with us.  I'm pretty sure that Dizzy would've had a good finish and probably qualified for the Boston Marathon.  He was dying to run, I had to hold him back.  He was like, "26 miles, pfff, no problem, be back in a minute."  Dizzy backs the racing scene 100%, he loves it and was made for it.  He's a good dog and we love him even though he makes us all dizzy.  Thanks for checking things out.  I'm working on some things and hopefully will get some posts up before long.  Things just seem to be moving in slow motion.  Hang in there with me.  Love ya!  chao.