Cross Racing is Tough on Your Stuff 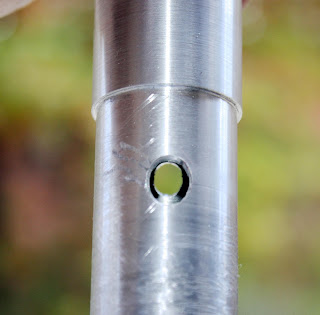 I had to do a little repair work on Branton's cross frame when I got back from the Texas.  I posted a few days ago that in one of his races in Little Rock he took a pretty hard hit.  He didn't actually crash I don't think but whatever happened slammed all of his body weight down onto the saddle, breaking a carbon wheel and bending the extended seat tube right above the seat tube cluster.  I just assumed that it happened right where the butting starts to get small even though I didn't think I would have left that door open.  After cutting if off I found that the bend was still in the fat part of the tube, a tube butted 8/5/8, so it was a pretty solid hit.  It made his 73 degree seat tube angle about a 69.5 degree angle.  I didn't take a photo before I cut it off but I still have the piece out in the shop, I'll try to get a photo of it.  At first I wasn't sure how I was gonna fix it.  There was no room left to braze on a seat lug and how in the world do you replace a seat tube in a fillet-brazed frame.  I mean I know how to do it but I could build another frame in the amount of time it would take to cut all that out and file all the brazing down, to perfection mind you in order to get a new seat tube in there.  Then I thought that I would braze a sleeve inside the seat tube and then braze another seat tube mast onto the sleeve.  That would've worked but right before the machinist started cutting the sleeve I stopped him and thought, "Wait, we can just use one of my seatpost, turn it down to the correct height, and just epoxy it in."  Oh yeah,"... and hope it holds up."  The idea was not just for getting it fixed as easy as possible but to get Branton back on his bike for some cross racing asap.  I mean this happened in the first couple weeks of the cross season.  Can you imagine waiting all year long for cross season to get here and then a couple of races in your bike is in the shop.  That would suck.  If any brazing would have taken place in this scenario then that means some repainting would have to take place and that might have added two or so more weeks that Branton was missing races.  Branton is very fond of cyclocross racing and seems to be fond of his MEECH as well so I wanted to try and get this resolved as quickly as possible.  The last little issue with Branton's frame was that when we built it he wanted the rear brake housing to be internally routed and out the back of the seat post and straight down to the brake boss and that why this little hole is cut into the post.  It also needed to be cut at a little bit of an angle because the holes, the seat tube vent hole and the hole in the back of the seat tube didn't completly line up making for a difficult feeding of the housing all the way through.  Anyway its done and back in Branton's hands.  Now all we have to do is wait and see how strong JB Weld really is.  Branton is gonna put it to the test real soon.  Cross your fingers. 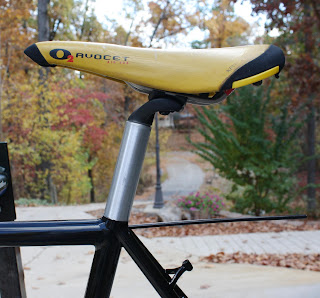 This just shows how the cable comes out the back of the seat cluster.  Oh yeah, and make sure the saddle is perfectly in line before JB does his thing or its all for naught.  The saddle is tilted up a bit in this photo but that doesn't matter because that part is adjustable however after seeing this photo it reminded me that this is how I used to run my saddle years ago before my brain was fully developed.  What was I thinking?  Don't know Virginia but I don't do it anymore.  "Is your brain fully developed now?"  Apparently not Virginia or I wouldn't be sitting here talking to you now would I?"  Gonna go look for some older photos of Branton's frame.  Be back in a second. 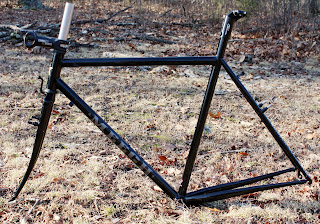 There that didn't take long.  This was fresh out of the paint booth roughly a year ago I think. 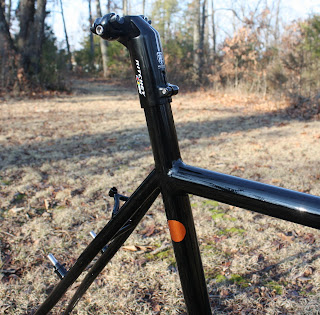 ...and this was the original setup with the Ritchey seat cap.  I believe the integrated seat post above is much cleaner and solid. 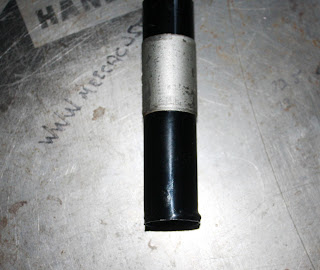 ...and this is, well do I really need to say?  Anyway, we saved a frames life and it didn't even lose any blood, uhh, I mean paint.