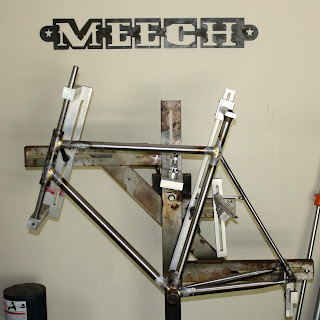 Here's a little frame I brazed up yesterday.  I started on this last week and it was inspired by all the recent talk of endurance bikes.  I also found something on a gravel road racer that I believed was made by Salsa, maybe?  Anyway, I don't know how many gravel road races there actually are however I do know that from the time I bought my first cross bike some 14-15 years ago, I always thought it would be great to have a frame that would accommodate the cross tires but still fit under your average caliper road brake.  Cross brakes are quite a bit better now than they used to be, sort of, not really, I guess I was never good at setting them up properly.  I actually had V-brakes on my first cross bike, a steel Bianchi sized 60cm, and it had a Marzocchi suspension fork with about an inch of travel.  The fork weighs more than most of the frames that I build.  Damn, that bike was a beast to ride but it made for some killer winter training and I vaguely remember winning one downhill city limit street sign sprint.  This frame is a 56cm with a 56.5cm top tube, has 73 degree angles, and a 60mm bb drop.  I put some beefy chain stays on it and lengthened them to about 420 mm to accommodate a 28-32c tire.  I got some sweet Racer Medium brakes from Paul's Components the other day that I think I may incorporate into the project, or you could use a long pull caliper from Cane Creek, Shimano, or whoever else but I doubt they'll look as cool as Paul's. 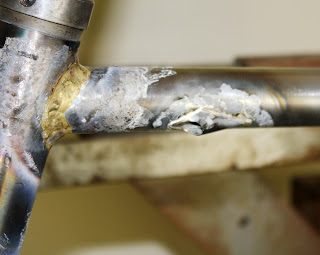 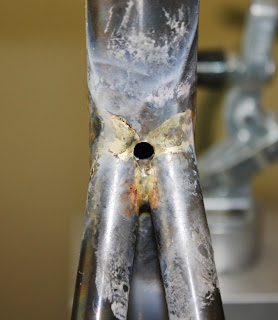 ..out the back door and down. 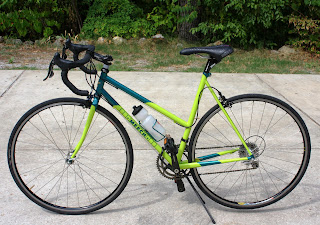 The Anne Marie has been finished for a while now but I forgot that I built this frame with the intention of wider tires, mainly for safety reasons.  My wife is a little accident prone.  Anyway, regular calipers wouldn't quite reach the braking surface and so I had to wait on some longer pull brakes.  She's fixin to go give it a test ride right now. 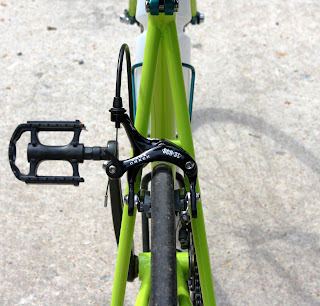 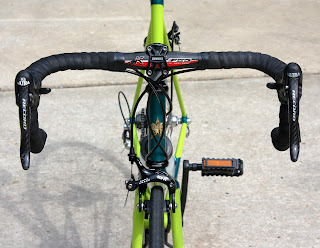 The Marzoke I was talking about.  Tipped the scales at 3.44 lbs.  I've got some plans for this thing somewhere down the road.  Just waiting for the right application. 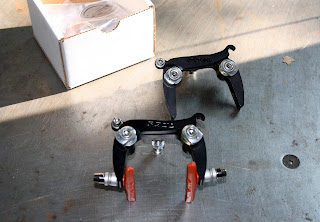 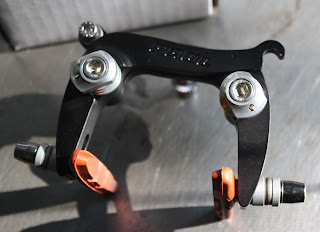