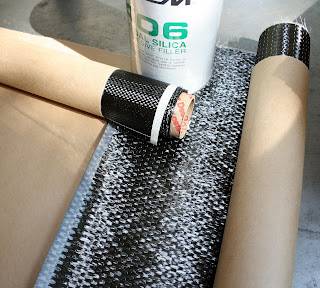 This was a little package the UPS man brought me yesterday.  I always get a fuzzy feeling inside when I get some new carbon fiber stuff to play with, it just feels like something is about to go down.  In this case its my first carbon repair work.  While I'm more interested in building carbon frames I thought it might be some good experience to do a few repairs along the way just to learn some more about the process.  I feel like it can only make me more confident when building my frames and if I can help someone get their busted carbon frame back on the road or trail its a win win situation.  I got a nice little sheet of some pretty butch uni-directional and some 2x2 to match the pattern on the frame as close as possible.  Got some new fillers as well to build some "Beefy Mondo Fillets" on the next frame.  There won't be any flex issues in the next frame. 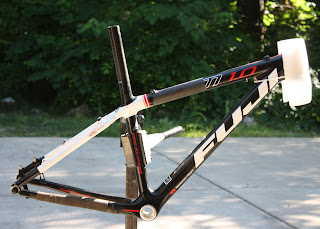 This is the frame I'm gonna be working on shortly.  This is one beefy mountain bike frame for sure.  The top tube took a hit and just has a small smashed in spot.  I just sanded the clear off to get to the core.  I learned something real quick.  Always take a picture of the frame before you start rearranging its face so that you can repaint it to match later.  I was too anxious to see the damage and didn't take a photo before I started to work.  Fortunately Jonathan said he likes the industrial look and will probably go with the raw carbon repair look.  It was fairly easy to find a photo of this frame on the internet so no worries, but just for reference purposes a before and after pic can't hurt anything. 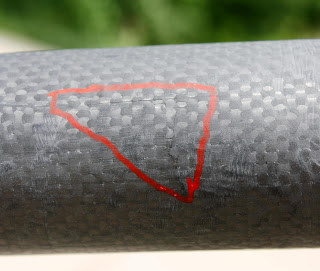 I almost thought there wasn't any actual damage until I got a little deeper and looked closely.  This is not damaged very badly and should be a relatively easy fix.  You could probably keep riding this frame without issue but this top tube is pretty thin so a small fix now is better than having it crack in half later. 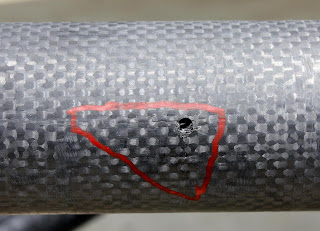 I drilled a little hole to check the thickness of the tube and its much thinner than I thought a mountain bike would be.  I have everything I need in place to work on it but its gonna be a week or so before I actually repair it because I have a steel road racer that I just got started on for another Jonathan up in PA.  I'll try to remember to post the repair work on the site so you can see the finished product and hopefully after that I can get started on my second carbon frame.  I better go change the oil in the vacuum pump.  Thanks for checking things out.  Chao.
Posted by MEECH at 7:25 AM