How bad could it actually be? 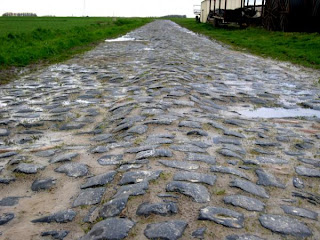 The 2012 Paris-Roubaix is over and Tom Boonen has won for the 4th time in his career.  Didn't look like much of a race to me.  He dropped everyone with around 50 km to go and soloed in like he had a motor on his bike.  As Paul and Phil were talking about the fastest Roubaix ever I became interested, a little more so than usual.  First off, when I saw that Boonen finished in roughly 5 hrs. and 55 minutes I thought "whoa, how far is this race actually?"  I had always thought it was 168 miles and like a 7 hour race, and depending on the edition it looks like it is roughly 150-165 miles. My typical 100 mile rides (back when I could actually ride 100 miles) normally took around 5 hrs.  Granted, we always stopped at the store and got some Gatorade and a couple of corn dogs and some nachos, you know with that cheese thats been in the bucket for about 3 days, and the girl always snickers at you when you ask for extra jalapenos.  They really help get you through  those last 15-20 miles.  Anyway, our rides were on perfectly paved roads and this Boonen cat, Tommeke I believe they call him, did roughly 65 more miles, much of it over roads like the ones pictured above and he only needed 55 more minutes to cover it all.  What was even more interesting than that was that the fastest Paris-Roubaix ever was like in l964 or '65 and they averaged 28 mph over 165 miles.  That was over 45 yrs. ago.  So then I started thinking about the differences in the bikes back then versus what they are riding now, and finally I just arrived at the thought that I want to watch that 1964 or '65 race.  It has to be at the least a little fascinating. 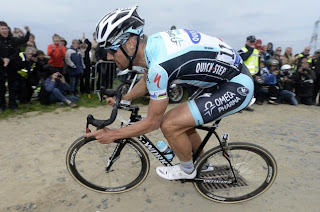 Bike looks a little small for you Tommeke.  Oh well, I always heard that pro bike racing was a circus. 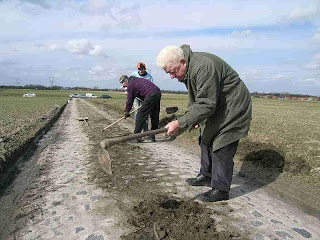 The old timers always think the guys these days have it too easy so they get out there the day before and plant a few surprises.  Then on race day they stand around out in the fields all day drinking beer and laughing as riders hit the mines that they planted.  Oh what fun! 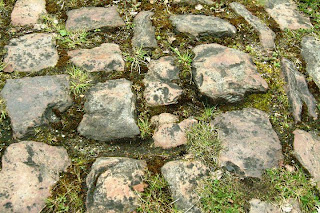 This isn't so bad.  I've gone to school dances with girls who had teeth worse than this.  "No honey, you've got a very pretty smile.  Now just remember to keep your lips tight when they snap that photo, and then we'll go dance over there in that dark corner." 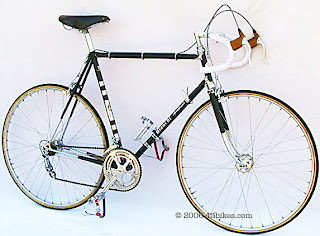 Just what I suspected.  I started looking at 1965 bicycles and here is the Bianchi Specialissima from that year.  Now this may not be the bicycle that won Roubaix however you can imagine Bianchi was at the forefront of bicycles during this period as they are in any period.
And what is it made of?  You guessed it.  Steel!  What more do you need to know?  Steel is faster than everything else, period.  Not only that, but I think I discovered where Specialized got their name.
Posted by MEECH at 8:08 AM